Stronghold. The baddest game I have EVER played. I remember being at Fry’s one day (when I worked there) and seeing a PC gaming magazine talking about a new game coming out called Stronghold. It was a castle sim game. Well I was all a titter about it. I loved castles. I even wrote my college thesis on castle construction (take that!). I liked a game called Lords of the Realm (1 and 2) which was sort of a castle sim (but more of a economy/invasion sim). The release date was a year away (in 2001).
The release finally rolled around and I instantly fell in love with the game. It was great. The music was nice, the graphics were fantastic… 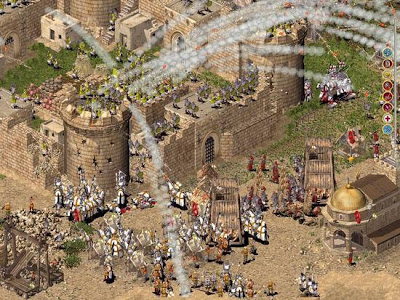 Hold on, let me clarify something here before we continue… I HATE 3D graphics. I LOVE 2D graphics. I guess this love relationship derived from 8 bit Nintendo and the like. I have always felt 2D graphics show real artistry and work as opposed to some blob of 3D. You know what I mean. Look at the graphics in the Sims and compare it to more flat-looking but far more detailed 2D gaming graphics. I have always thought 3D looked bland and nasty compared to 2D.
Ok, back to the story…
The game play was great too. You basically build up your castle by keeping your peasants happy and fed. You manage resources and build weapons and a means to defend yourself. Its far more basic than most games of this type. Take for instance Age of Empires. It is basically the same game. You manage resources and build yourself some army and defeat your enemies. Age of Empires was great but it was far more complex than Stronghold. I think that was a huge reason it did so well. It was simple.
So I played it and played it until I finished it. Then I played it over again… and again, and again. I must admit I played through the entire game at least 9 times up to this point in my life (and I intend to play some more).
Much to my amazement in 2002 a new version of the game came out: Stronghold: Crusader! It was basically the same game but now with a Crusade theme. It was very historically informative in between all the fun game play. There were some new graphics (to match the Middle East theme) and a few new army troop types. It also boasted more than fifty more levels than the original Stronghold (with emphasis on multi player). Just when you think a game couldn’t get any better it did. This was gaming ecstasy!
Once again I played and replayed it. Then heading towards 2005 I hear rumors of a brand new Stronghold on the way! Completely new, not just changes and additions… Stronghold 2…
Well, I can’t have everything… Stronghold 2 S U C K E D!
Why, you ask? I will tell you… 3D graphics. It looked crappy! I mean crappy. I am not too sure how it worked out in the end because I never played it too much. After about a hour I gave up. I was not feeling the love for my favorite franchise.
Suddenly the skies opened in my despair and a ray of kick-ass sunshine brought me new hope an fun… for in 2008 Firefly studios brought us Stronghold: Crusade Extreme!
This new game was basically the same as Stronghold: Crusader but with the ability to have 10,000+ troops on the battlefield at once (as opposed to a few hundred as before). They also added some quick attacks and 50 more missions! Oh man!!!!!
So I had fun again and again with Extreme until in 2009 the announcement comes down that a new Online version of Stronghold was coming… Stronghold Kingdoms! I wet my pants.
Ok, maybe not but pretty close. The graphic shot they leaked had the game looking JUST LIKE the first Stronghold! 2D yahoo! I signed up on their website for updates etc…
A few months passed and suddenly they started asking for Beta testers! OMG! Sorry I am all spazzing out but this is greatness! I had been a Beta tester once before in the past on a DVD game called Hologram. Do you remember that? It was an actual arcade game that was a hologram. It sucked royally but it was kinda cool in concept. Anyway I Beta tested that (basically I played it and returned a survey telling how well it played on my DVD player, controls, and issues I had with it). Anyway I signed up for the Beta test on Stronghold Kingdoms and waited…
In early March I got an email, I was accepted as an Alpha tester! Alpha testing is the same a Beta testing but with an even earlier version (where some graphics might not be complete, no sounds, etc). I had a mix up with my email addresses and couldn’t get in right away and had to wait a couple of days but then I was in!
Ahhhh bliss…
There was a bit of a learning curve since there were no instructions written yet but I got the hang of it quickly enough.
Stronghold Kingdoms is less like Stronghold and more like other online games (like Envoy, so I am told). It is more about the economic development as opposed to the hard core warfare. I am not complaining though. It’s great. With it being in Alpha still they release patches every week or so to add features and correct bugs. Apparently the game will be free to play with the option to ‘buy’ additional features.
I am having so much more fun than I did with Hologram.