I would start by saying that Wicked is a flippant girl’s fantasy but it was written by a dude so I won’t. The musical is based on the first in a series of books by Gregory Maguire that ‘re-write’ the Oz stories. If you remember there were 60+ of L. Frank Baum’s Oz books (most written by others after his death.) The books range in date from 1900 – 2007 as well as several alternative versions (including Maguire’s).
Wicked falls into the whole ‘new millennium, happy, no one is really bad, creamy, sappy, girly, everyone is different, different is ok, campy, pukes-ville sentimentality’ story category.
I know it’s harsh but that’s what I get out of it’s story. I’m not saying it’s bad, just a bit too sappy for my taste. Maybe I’m annoyed because there is some fanboy out there that just couldn’t well enough leave something interesting alone. That is probably it. 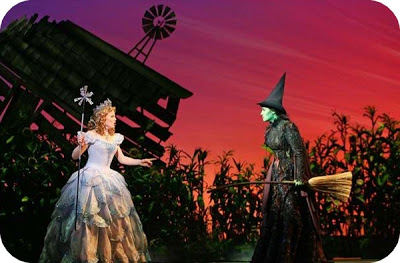 Ok, enough bashing of the story material. Let me get onto the musical.
Here is my thought as to how people who decide to make stories into musicals work on it:
“OK, we know the story…”
“Right boss!”
“Now, I have divided up the story into acts that fit our format.”
“Right boss!”
“Now we need some songs.”
“Right boss!”
“Let’s write a song about this bit, that bit, and that bit.”
“Right boss!”
“I have this great idea for one of the songs. You write the rest.”
“Right boss!”
***** Months later *****
“OK, we have finished the first half to the intermission.”
“Right boss!”
“I’m pooped but we are contractually obligated to finish it before the end of the week.”
“Right boss!”
“Get to writing.”
That’s how it goes, I swear…
The first half of the show is really good. If it ended there I would be satisfied. The second half seemed the product of either a burnt out imagination or someone in a rush.
Now it is just fact that I am going to bash it because if you remember just a few short weeks ago we went to see the grandpa of the Broadway musical Phantom of the Opera.
Wicked is no Phantom of the Opera. Opera has had more than twenty years to ‘age’ like a fine wine. It has been subtly changed and gotten better over time. Wicked is still new and maybe one day it will be more refined. I already have noticed changes from when we saw it three years ago. Will it ever be AS good? Who can say.
The story of Wicked is the story of a misunderstood Wicked Witch of the West. She wasn’t really wicked (barf), she was just misunderstood and used. The musical starts with the melting death of the witch and then plays out like a flashback. Elphaba (the witch) has a misunderstood and feared childhood because the color of her skin. She gets involved with Glinda during their days at university and eventually become friends. Elphaba is on the fast track to becoming the Wizard of Oz’s magical adviser but things go sour and she is turned into a fugitive (through what amounts to be a smear campaign). There is a love story and some anti-animal theme and on several occasions events in the Oz universe are ‘tied toghter‘ such as the where the tinman, scarecrow, cowardly lion, ruby slippers, etc come from.
The first half of the musical deals with he back story of the youth of the witch (just a nerdy, bullied girl) and ends when she becomes a fugitive while uncovering the somewhat evil nature of the Wizard. If it ended at the half I would have been satisfied with my experience. It was that good. The second half does alot of that ‘tying up’ of the events we know about in the Oz canon. It seems slower and there are not as many big set pieces and the songs don’t seem as memorable. Actually very few of the songs are memorable (when you compare it to other musicals… ok, Opera) but the ones in the second half are lacking even more. This is of course my opinion because the woman sitting next to my wife was crying during the final song.
The sets, lighting, and effects were great. Once again I will remind you that THAT is the main enjoyment for me in coming to a musical. There weren’t as many scares like Opera and no chandelier to come crashing down. The colors were great and all that green made my eyes bug out.
One of the complaints about the Music Hall at Fair Park in Dallas is the acoustics. At points I did have a hard time hearing the actors over the instruments and that kind of took away from my appreciation of the musical numbers.
Can I suggest going to see Wicked? If you are a chick I can suggest it 100%. This thing is made for chicks. The first half is cool for dudes with it’s big production and tons of laughs, but they will loose interest in the second half. Some dudes will not enjoy it at all (such as the guy sitting in front of us who fell asleep at various points).

2 thoughts on “Review: Wicked: The Musical”