Yadda yadda yadda you all know about the whole hard drive disaster and double disaster. I’d like to talk about my attempts to recover the data in my own way (not the ‘pay us money to tell you we can’t do it’ route).

After the hard drive crashed I didn’t want to mess with it. Chris told me I should open it up and see if I could mess about with it. The thought crossed my mind but I knew better than to try it and later find out I was the one who ruined the data. After the two companies utterly failed to do anything at all about my problem I decided to do a little Frankenstein work on the drive to see if I could get anything to happen.

The drive that died was a Western Digital Caviar 1 Terabyte drive. It originally cost me about a hundred and fifty dollars (with external enclosure). One option I could consider is finding the EXACT hard drive and doing a platter transplant.

SCREECH! Let’s have a little lesson on hard drive manufacture…

Hard drives are made of aluminum and have ‘platters’ inside them. These resemble CDs that are mirror like in appearance and made of aluminum, glass, or ceramic material with a magnetized surface. There is an actuator arm that moves back and forth very fast that reads and writes data to the platter. Here is a picture of an open hard drive: 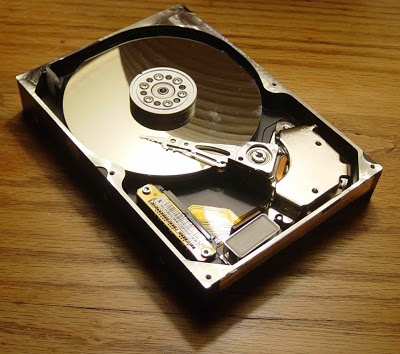 What actually ‘crashed’ or was damaged during BOTH of my hard drive disasters was the actuator. On the end of the actuator is a teeny tiny heads that read and write to the magnetic surface of the platters. These are as fragile as… well something extremely fragile and if they so much as get bumped they will crap out on you. They sit millimeters (or less) above the platter at all times and if they come in contact with the surface it will scratch and ruin the platter and the head.

The platters ‘looked’ fine but the people from both companies told me they were scratched so badly the data could not be recovered. I still call bullshit on this. Anyway my thought was to find that exact same type of hard drive, ever so carefully remove the platters and place my platters inside and try to get the data off.

Anyone will tell you that if you break the seal on a hard drive you are up shit creek without a paddle. All of these data recovery places use ‘clean rooms’ to work on hard drives so dust won’t get on the platters. I don’t have that luxury so whatever I decided to do I would just have to chance it. After looking at the cost of a 1 terabyte drive (about $70.00) I decided against it. If I spent that much and nothing happened it would be like throwing good money after bad. I decided to try some of the hard drives we had sitting around work. They all use the same mechanism and we had Western Digital drives around so I decided to try it out on one of those.

I ever so carefully swapped platters and tried it. Nothing happened. The drive spun up and then it shut down. They do this if something is wrong. I can’t be sure if it was because of my platter or damage I might have done while messing about with the actuator (remember how fragile I told you they were). Disgusted I put the drive away and went about reconstructing the data I had lying around.

Fast forward to the 2nd data disaster. This drive was one I got from work and low and behold we had an exact duplicate drive. I swapped platters and powered it up. It was acting funny, making a strange noise and I messed about with it but nothing happened. When I was about to unplug it I noticed Windows Explorer glowing at the bottom of the screen, telling me it found a hard drive with data on it.

Let me say right here and now that if I had been using XP and not 7 I *might* have been able to recover the 2nd crashed hard drive data. If you insert a new drive (hard drive, USB, CD) XP will pop up a screen to ask you what to do with what it just discovered. Windows 7 will simply have an already open window (but minimized) icon glow. If I had seen that pop up screen right when it happened I might have been able to pull some data before messing with the drive more. However I didn’t see the subtle glowing icon on my task bar. It’s ALL your fault Bill Gates!!!

Any way I noticed the glowing icon but at that point I had been messing around with the drive and it just wasn’t working. The non-pop-up screen showed the two main directories on the hard drive but at this point they wouldn’t respond anymore. A fleeting glimpse of my lost data.

I gave up at that point. I have now received my Blu Ray burner and am reconstructing the data once more. Once that is done I will make a back up disc of the whole thing and continue on.

And know you know… and knowing is half the battle!