Today I am reviewing the Japanese period action movie Azumi. Azumi was made in 2003 and is set in feudal Japan. It’s based on a comic book and it shows… badly.

The story goes like this; After the Tokugawa gained power in medieval Japan his peeps sent on of his warriors to train assassins to take out the few remaining lords that could cause trouble for the Tokugawa clan. So this dude takes children (including a little girl whose mother died) to a remote mountain location and raises them as super assassins.
Let’s get into the mess now…
We pick up around fifteen years later and all ten of his assassin teens are happy go lucky kids sporting wayyy too modern haircuts. In one cool moment in the movie (and one that doesn’t make any sense) the master takes all ten and commands them to pair off then he tells them to kill their companions (thus keeping only the best of the ten). Like I said this is cool but sets up the nonsense of the poorly written characters. If they had been really trained all their lives to be assassins they wouldn’t be so happy go lucky. They would have turned and killed each other but instead there is some wringing of hands and finally they do the killing. This really upsets them for the whole of three minutes. They basically slaughter their brothers and sister and then move along. 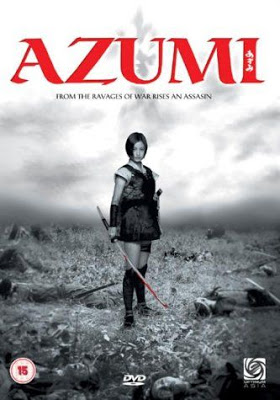 So they set out on their mission to rid Tokugawa of the troublesome lords. They seem to have some emotional objections about killing possibly innocent people (once again they were supposed to be trained their whole lives to be killers) but do their job and massacre untold numbers of Japanese extras.

So one of the lords gets wise to the plans and set loose a mad but excellent swordsman to get rid of the assassins coming for him. Of course the swordsman is a TOTAL Anime/Manga Stereotype. Wears makeup, flowing robes, carries a rose, very effeminate and super skilled. He goes about killing in his effeminate manner, reducing the assassin teens to a few. Our main character Azumi (the hot Japanese girl) is the only person who can stop the madman and the lord. She literally kills hundreds of sword wielding guards and eventually the swordsman, avenges her friends and end of movie. 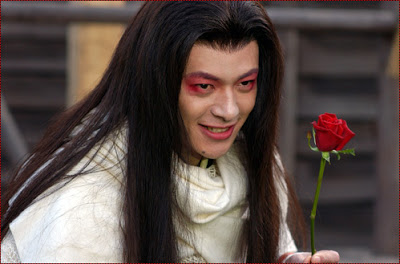 This is reason Akira Kurosawa is considered a master (even after all these years). Japanese film making SUCKS! It’s more like they try to imitate American films and sacrifice story, continuity, or just plain relativity to get it done. It looks cool but it’s a bit like NetRunner, ‘Style over Substance’. The characters do things that are not possible and everyone seems to shrug it off. Characters act all wrong (emotion wise) and no one seems to notice.

At times it looks great. Its like an optical illusion that your brain has a hard time figuring out. It looks like one of those sixties samurai movies… then you see those Tokyo 2003 hairstyles. There are a few digital effects that look a little cheesy but it is well choreographed and looks slick.
The sound was a disappointment. It was dubbed (which crappiness is to be expected) but there was almost NO ambient noise going on. When you watch ANY Japanese production that takes place in the countryside in Japan you inevitability hear the cicadas. In this movie they just seem to have forgotten to add any ambient sounds.

Can I suggest it? If you are a Japanese action movie fan, yes. If you are a Akira Kurosawa fan, no. I never saw the manga so I can’t tell you if it’s close to the original material. It is fun at times and at others it’s frustrating.