By Nathan Stout of AccordingToWhim.com

Government… it’s all about politics and campaigning. Do you need to know anything to be in government? Heck no. All you need is to be able to campaign well.

Rocketville was made by Avalon Hill in 2006. The designer was none other than Richard Garfield! It is for 3-5 players and will take you about an hour to play.

Rocketville is a game where players campaign to become Mayor of Rocketville! Chris was uber-excited because when I first told him about this game he thought I said ‘Rockville‘ and he was all ‘yeah, a game finally made for me’ but then I told him it was about campaigning and NOT about growing your hair out long so he simmered down. Not really but it was a neat little story.

BACK to the game. That’s pretty much it. You campaign in order to become the mayor. As in real life you become mayor by being more popular than your opponents. The board is divided into a grid with a popularity trail along the outside (in order to keep track of each player’s popularity). The players move about the grid and ‘bid’ to win that grid square. Some grid squares give you popularity points (you move your token forward on the popularity trail) and some give you special cards, while other make you lose popularity.

Once all the grid square have been bid ‘on’ (played) then the game is over and you calculate all the additional popularity points. This final tally of points is where the game can take a twist and someone who no one suspected to win can pull ahead and become mayor.

The bid aspect is the focus of the game play. Each player gets cards that have numbers (and colors) on them. There are a few different colors as well as white ‘generic’ cards. Each player secretly bids on the grid square (or ‘neighborhood‘) by using the cards in their hand. Then all players reveal their bid and the highest number wins. Each of the neighborhoods are different colors so colored cards always beat out generic white cards. So if you play a brown 3 on a brown neighborhood and your opponent plays a white 35 then you win because your card matches the color of the neighborhood (so you get precedent). All those cards are then thrown away.

Whoever wins a neighborhood then decides which space to move next and all players begin the whole bid process again. Each player also has a Campaign Planning card which they play during the bid process and reveal just like a normal bid. That card allows you to draw a card instead of participate in the bid for that neighborhood. 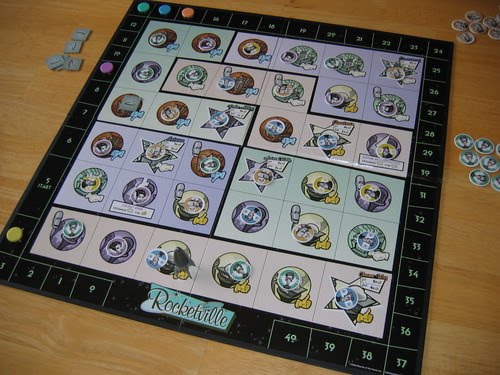 There is quite a bit of strategy to this game once you get the hang of it. You have to balance getting popularity points with getting bids in the right neighborhoods.

There are also some extra cards called Endorser cards which can be a blessing or a curse if you happen to get one. Finally there are Robot cards that can give you some last minute popularity points at the final tally.

I think Richard Garfield and the artists who worked on this game must have been watching Futurama when they came up with the look for Rocketville. Chris calls it ‘Futurama the Board Game’. It really does have a Futurama look to it. The flavor text on the cards is very funny as well and should be read whenever possible. They are all campaign promise themed such as:

“Free baby clone with the delivery of each baby.”

No one seems to be a die hard fan of Rocketville but it is simple to play and can be fun as well. You can pick it up pretty cheap from various online retailers. Here is the link to Wizards of the Coast’s Rocketville page.