The movie I am going to talk about today (and it’s original) is totally mislabeled. The movie is called Clash of the Titans but there are no Titans in the movie at all. Oh well…
This review will make you want to pop a Prozac (or you will want me to pop one) casue I’m so shitty about everything.
1981 was a great year. Fantastic music and fantastic movies. Clash of the Titans was one of those. It was cheesy but that’s the way most fantasy movies were back then. The world of special effects was new and many movies relied on older techniques to get by. Clash was one of these. It was a straightforward story and when the head of the statue of Thetis starts talking it scared the crap out of me as a kid.
2010 was a shitty year. Movies from the past where being ‘re-imagined’ so studios could wring the last life blood out of an idea, since originality was dead. I had more debt that several South American countries combined and some village in Kenya was missing it’s idiot.
Avatar brought some great new technology to the movie world. Technology seems to be the only real advantage to living in this future. You might remember me talking about that technology a bit in my Avatar review a week or two back. Well when Avatar came out and everyone went ga–ga over it many studios jumped on the 3D bandwagon and added it to movies that were already in production (such as Clash 2010). This created a mash-up of sorts with some scenes shot specifically for 3D (which annoys me greatly) and post-added 3D effects.
When I say shots made specifically for 3D movies annoy I mean ones like this from the original House of Wax. WTF?! This sort of ‘gimmicky‘ scene annoys me greatly. Avatar utilizes the 3D technology in a much more subtle way.
Anyway Clash of the Titans 2010 has some very obvious ‘made for 3D’ scenes in it. That’s all I wanted to say about that. On to the crap fest!
I realize that the ’81 version of this movie is no Gone with the Wind but it made up for it’s faults with the imaginative effects. the ’10 version has none of this going for it. Once again it is a ‘re-imagining‘ where some studio guys sat around a table and said to themselves ‘how can me make this movie more kick-ass and modern’.
Persus is played by Sam Worthington (Avatar, Terminator Salvation) who can’t figure out what his accent should be. He is a tough and rumble… fisherman. He looks like he is a UFC octagon fighter… oh well. Anyway his family is killed and he wants revenge on Hades (who did it). Yadadada. You know the story. They basically used the same creatures but just played around with the situations in this version. The simple fisherman (who didn’t want to fight anyone AT ALL when he witnessed his family get killed) becomes a blood thirsty killer in two seconds flat. I think he even matches Anakin Skywalker in his ‘turn around time’ to becoming a killer. He vowes to kill Hades once he finds out he is a Demigod (bastard son of Liam Neeson). He fights giant scorpions, Medusa, deals with Stygian Witches, and fights his stepfather Calibos. Calibos is the freaky cursed half-devil looking guy from the original. In this version he is some lame disfigured dude. In the end Persus wins. Were you expecting anything different? 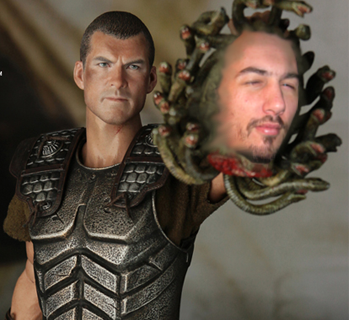 If the original was just an effects movie and this new one is an effects movies (with effects being so much imported) why is the original so much more loved? I think the answer is that because the new movie is such the glitzy Hollywood same old-same old it lacks any sort of originality and that turns people off. How could it have been better? I don’t know. I’m not a Hollywood writer. Maybe the next chapter will be a little more original since there are so many great aspects to mythology. They will try again next year when the sequel comes out (I’m not kidding there). It is Clash of the Titans 2: Electric Boogaloo.

A final note of interest. The trailer for Robin Hood starring Kevin Costner uses the ’81 Clash soundtrack and I find that funny because you will notice that Disney utilizes the score to Robin Hood in a ALOT of their marketing for all kinds of movies. Just sayin‘.