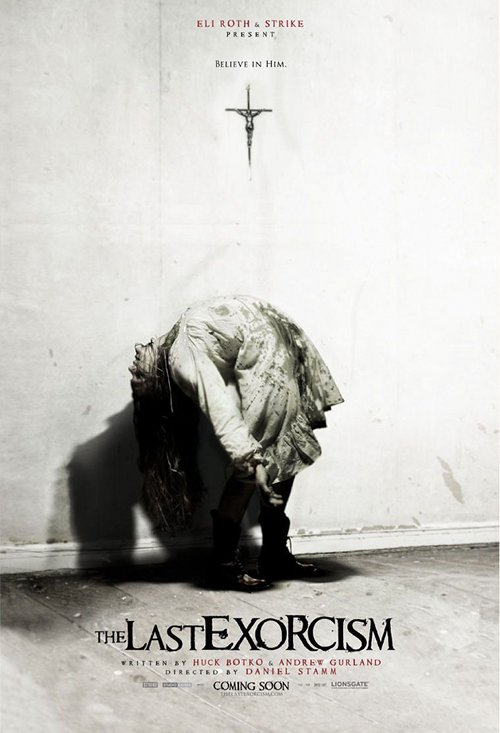 I’ve been invited to join the According to Whim dialog, so I’m taking the opportunity to hijack the site and discuss something very near and dear to me: horror. Can’t get enough of it. Books, movies, comics – any medium and any format. Living in Austin helps this aspect of my personality. This town is loaded with film geeks, genre geeks in particular. So we’re always getting early screenings of the most interesting movies. And we have the Alamo Drafthouse, which I would put up against Disney World as the happiest place on earth any day of the week.

Anyway, last night was the perfect storm of horror nerdery when I attended a sneak peek of The Last Exorcism. When I first started seeing previews for this movie I was a little skeptical. First, because demon possession movies are universally at the disadvantage of following The Exorcist, which I consider one of the most perfect horror movies ever made. Second, the trailers made it seem like a total rip off of The Exorcism of Emily Rose, which I found soundly disappointing and completely unnecessary.

So when I found out Ain’t it Cool News was showing TLE more than a week in advance to probably the most demanding film audience in the world, and that the producer and director would be in attendance, I figured that at least the filmmakers felt they had a winner.

This docu-style treatment is not a found footage movie like Cloverfield or The Blair Witch Project. Instead, this footage has been edited and scored, so you find yourself wondering who, in the film’s universe, did it? Here’s the plot: a charismatic Louisiana preacher has invited a film crew to follow him along on an exorcism, something he’s done countless times before. Cotton, the preacher, has carved out a living by playing on the ultra-superstitious nature of his small-town congregation. He’s not a religious man himself, just simply carrying on the family business. After a crisis of faith, he’s decided to expose himself as a fraud by showing how his sham exorcisms work, including his use of props to trick people into thinking something supernatural is happening.

The first 20 minutes is fascinating as we follow Cotton in his day-to-day life, meet his family, and listen to him describe the family business. This first act is critical to buying into the rest of the movie because he’s so genuine. Striking a balance between this documentary style delivery and building believable characters is so difficult, but these guys do it seamlessly.

Cotton and his crew head to some backcountry farm where a farmer’s livestock is being slaughtered. He thinks the devil has possessed his daughter, and in desperation contacts Cotton.

Cotton goes through the motions like he’s done time and time again, and as you can guess, things derail when he realizes something beyond religious zealotry is at work with the farmer and his family. I won’t give anything else away other than tell I never knew where this film was headed. And when it got to its glorious and completely satisfying ending, my brain immediately began replaying the entire thing in my mind to see if I could figure out how we’d gotten to such an unexpected conclusion. There is some of the infuriating “was she or wasn’t she” questioning, but since these characters are infinitely more interesting than in The Exorcism of Emily Rose, it works.

I judge horror, particularly horror couched in reality, based on whether or not it rings true. For example, The Exorcist – the book in particular – seems like that’s how it would happen in real life. The skepticism, followed by horror, followed by despair, seem perfectly logical in the confines of the narrative. In the same way, the greatest haunted house movie ever made, Poltergeist, is totally believable because of the way the family responds to the strange happenings early on. Their amusement when Carol Ann is propelled across the kitchen floor in the early part of the film makes it that much more terrifying when trees and clowns start attacking later on.

Fear is also the hardest emotion to evoke, which is why lots of horror movies fall flat. That’s because of all human emotions, fear is the one we have the least use for. We just aren’t scared of things, so those feelings are not as close to the surface as humor or sadness. So when a movie can do that, it usually makes about a zillion dollars.