This Saturday I held a garage sale in Fort Worth. I have this love/hate relationship with garage sales. I love them because you can unload of bunch of stuff you don’t need or use anymore and make some cash but I hate them because you have to deal with people being cheap.

You may or may not know that the whole Fort Worth thing fell utterly apart. We are moving back so I thought we needed to dump a lot of stuff to make it easier to move back (make some cash, get rid of some unused stuff).

My plan was to open the garage sale at 8:30am. Chris would be there to help me haul the stuff up to the front yard. I was nervous of all the ‘early bird’ types so I placed a ‘closed’ sign up there and we did have some people come by then drive on (with one actually getting out for the vehicle before realizing what the deal was). We were at about 8:15 and when I came back up front with a load of stuff and there was someone shopping. Chris turns to me and says that she is a close personal friend and it was ok… he then asked her her name. By the time our official start time had arrived we had like six people rummaging.

Now let me just start by saying that I have good stuff. We are not talking about us selling a bunch of old cracked plates, nasty used stuffed animals, or old pantyhose. We had a lot of fairly new and fashionable clothes, many items still wrapped (like old Christmas presents we didn’t use), my DVDs, and brand new Cyberpunk 2020 CCG cards. When I and my wife went through everything and priced it I got a good idea of the great stuff we had and just knew we were going to sell every bit of it.

Chris and I rotated between hanging outside and messing about watching videos on the computer (the videos I was working on for the 2010 Halloween Special and the Hangman’s House of Horror’s party video). Chris did most of the sitting outside. The house faces the sun and has no trees in the front yard so he did a lot of baking in the sun. People came and went and didn’t appear to buy all that much. From what I remember we had only 2 big buyers. Some bought a crock pot and some clothes and kitchen utensils and someone else bought a whole slew of stuff.

Since I purchased all those Cyberpunk 2020 CCG cards a couple of years back Chris and I have been working at selling them. It’s tough going. We posted auctions of them. We made an online store for them. We posted Craigs List ads for them. Apparently selling them at garage sales is far more effective since we sold more Cyberpunk 2020 CCG cards at the garage sale than in the last six months of selling elsewhere. Also a surprise was the fact that our Cyberpunk 2020 CCG clientele was of a Latino persuasion. True, it was cheaper than online and these people probably have kids and family that would like to play around with some stuff even if they know nothing about them.

Towards the end of the sale Chris and I did a little shopping of our own and Chris picked up the wife’s old Sims 1 games we had bundled together and I picked up a book Chris brought called: Isaac Asimov’s Mother’s Day. I love short stories. I love sci-fi. It’s like Reese’s peanut butter cups: ‘the two tastes that taste great together’. I love the cover of this book too: 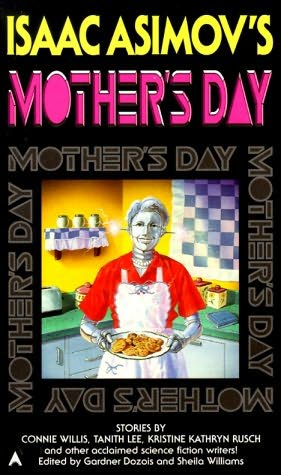 Isn’t that swell? Can you just imagine her saying: “Bzzzzt. Have a hot fresh ~ bzzzzt ~ cookie dears. Bzzzzzzzt”.

Anyway at about 1pm we closed up shop. I didn’t want to be out there all day so I made the end time earlier than most. As I was packing stuff back up people would drive by slow and realize we were closed. Chris would make an offhanded comment like: ‘three hundred bucks for everything still here’. He kept doing this at slow passing cars but the further along I got packing up stuff the lower the price would go. This went on until the price for everything was like fifty bucks or something.

Chris was also convincing me to do the whole ‘paying off debt’ thing while I was packing stuff up. Chris’ plan is to have me just let him run my life for three months while we focus on Ebay and paying off debt. I told him I just feel like it wasn’t the right moment since I have been so busy i don’t have much free time to myself even. He also felt he had this issue. I told him we could save all the garage sale extras and do some Ebaying with it when our schedules were more free.

In the end we made somewhere around three hundred dollars. Not nearly as much as I had envisioned. I guess it was good enough and we got rid of some stuff (which was more important to me). I didn’t have too many haggling people to deal with and only one nut case (that went on and on about the government for no apparent reason what so ever).