This is an older movie but I was given the idea to review it in a dream I had a few nights back. I’d like to tell you how I came up with the idea thanks to the dream. The day before the dream I had been working on ideas for the upcoming 2011 Hangman’s House of Horrors season. The planning/creative meetings are coming at the end of this month and I had been jotting down ideas for themes and gags to use. That night I had a dream about being there at the haunted house. For some reason or another Steve Oedekerk (not to be confused with Bob Odenkirk) was running the house. As we were running to and for getting it ready to open I asked him: ‘so when is Kung Pow 2 coming out?’ I don’t remember exactly what he said but he shook his head and said they couldn’t make it because the first one didn’t do well.

Kung Pow – Enter the Fist is a very strange movie indeed. If you are a pop culture kind of person you might get it. If you are anyone else, forget it. Even if you are a pop culture kind of person you might get it, but you probably won’t really like it. If you do like it then congratulations, you are a VERY narrow slice of the demographic that this movie was made specially for.
Kung Pow is about a character named The Chosen One (or Chosen One, or sometimes: Chosen). The Chosen One was a child that escaped the killing of his family by the evil Master Pain. The Chosen One grows up to avenge his family but there is more to Master Pain than meets the eye. In the end The Chosen One defeats Master Pain (called Master Betty by this point) and avenges his family.
That sounds somewhat straight forward, right? Hardly. Let give you the whole ‘gimmick’ of the movie. Steve Oedekerk found an old Kung–Fu movie from the 70’s and had it restored from a print. He then re-edited it and re-dubbed the audio to form a totally new movie. He finally took himself and green-screened himself into the movie (over actor’s bodies, etc) and also made some identical sets and shot some new scenes (with himself in them). He took the ‘new stuff’ he shot and made it look old and when the casual moviegoer see watches it, they don’t really notice the mixture of old and new… much.
If you were to walk up to me and read me the above paragraph and ask me if I would want to go see this movie I would say… HELL YES.
Have you guessed that I am in that narrow demographic?
I got this movie from the place I worked at back in 2002 (a business who owned several BlockBusters and always got screener copies of movies). I watched this movie twice in one day and then again the next day. I was laughing my ass off at this movie. It was that good to me. It’s like someone got into my head and discovered what kind of movie I would love to watch and made it! The acting is cheesy, the effects are cheesy. It’s partly a 70’s Kung–Fu movie that’s cheesy. It’s like a Reese’s Peanut Butter Cup, when you bring all the tastes together it is even better! I do have one irritation about the movie… I enjoy the old movie footage 60% more than the newer-shot stuff. The fight scene with the cow was a great bit to have in the trailer (because it got lots of people in the door) but I didn’t care too much for it.
Have you ever seen MXC on Spike TV? It’s a Japanese game show where they re-dubbed what they were saying with crazy stuff. I love this too. It is the main reason I love Kung Pow so much. I like Oedekerk’s sense of humor too. You may remember he co-wrote the Ace Ventura movies as well as Bruce and Evan Allmighty.
This movie works on so many levels for me. I also really enjoyed the DVD commentary as well. It has some great insight into how they obtained the original Kung–Fu movie and it’s littered with jokes as well.
So, to sum up, if you like Kung–Fu movies, cheesy movies, crazy comedies all mixed into one then by all means watch this movie. If you don’t like some part of what I just described, then don’t, you won’t like it.
You may remeber that Steve Oedekerk also did the Tumb Movies and I did a review of them here on the blog. Here is that blog for your benefit. Also, here is my webpage with an article about Kung-Pow. 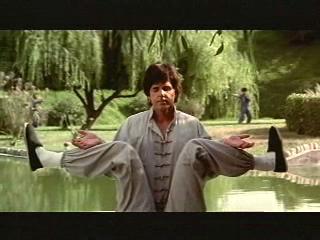