Cleopatra and the Society of Architects is by the company Days of Wonder. It’s a 3-5 player game where players attempt to become the greatest of Cleopatra’s architects but constructing palace parts, gaining ‘talent’, but avoiding corruption at the same time.

I bought this game about nine months ago during the purchase of Key Harvest (check out the joint review) and The Bridges of Shangri-la (not played yet). Chris came over last night and Loren came with him so we had to have a game night. One of my improvised 2011 yearly goals was to play each of my 80+ games at least once so we needed to knock this out.

Cleopatra (which I shall call it from now on) looks very complex. Check out this picture of all the pieces. Once you read through the somewhat light instruction book it becomes apparent that the game isn’t all that complex, it just has a lot of parts.

The game uses the bottom of the box placed upside down to serve as part of the palace the players are building for ol’ Cleo. The boards are laid out (one ontop of the upside down box too) and players take turns collecting cards (resources) or using those cards to build pieces of the palace (and thus gaining ‘talents’). You can think of talent like money basically. [Like in the Bible, and The Parable of the Talents, where the property was worth 8 talents. The Babylonians, Sumerians, Hebrews, and Greeks used talent as a measurement for various things including weight and mass of precious metals.] At the end of the game whoever has the most wins. When a part of the palace is built, the player takes the plastic piece and places it in its spot on the boards.

A neat element which can bite you in the butt (literally) is the inclusion of ‘corruption’ tokens. Basically the more shortcuts and underhandedness you use to build and gain talents, the more corrupt you become. At the end of the game the player with the most corruption tokens automatically looses (no matter how many talents they had). You have to really balance your play so you don’t become too corrupt. You will find that you must collect corruption, there isn’t much room to win without using shortcuts to get ahead of your opponents. The person who loses by having too much corruption is fed to Cleopatra’s pet crocodile.

As an added twist after every part of the palace is built, the builder must roll the priest’s dice. Every time the Ankh shows up on the dice that die is set aside and once all dice have been rolled and show that symbol it’s time to make an offering to the gods. All players bid using their talents and whoever offers more get to rid themselves of some of their corruption tokens, the losers have to take corruption and all talents that were bid is lost, all dice are then ‘reset’ and the rolling starts again with the next bit of construction.

One of the parts of the palace you can build is something called the mosaics of the gods. They go on the board that is on top of the upside down box. They are simply cardboard in various shapes (called Penta puzzles) which look somewhat like shapes from Tetris. You place them strategically to gain extra talents and create spaces where no other pieces can be placed (which allow you to ditch some of your corruption tokens at the end of the game).

The resources to build all these palace parts come from the market which are three stacks of cards which players can take during their turn (instead of building something that turn). The cards are various resources like Wood, Stone, and even the Artisans who do the building. For instance a Spinx costs 1 Artisan, 1 Stone, and 1 Marble to build. There are also ‘Worshipers of the gods’ cards 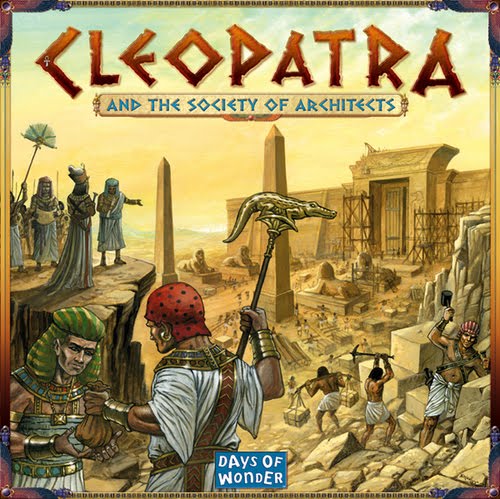 Here is an excellent FAQ/Errata document from Board Game Geek.com

During our 2 games Chris was fed to the crocodile both times (having accumulated too much corruption) and Lore won once and I won the second time. In the end we determined that in both games just one move (i.e. buying something, or failing to build something, etc) made the difference between the winner and looser. It worked out nicely each time.

Cleopatra turned out to be a rather fun game. It’s a shame I didn’t play it for so long. It has a lot of strategy and a fun 3D game board. Surprisingly it is very inexpensive as well. So get some friends together and give it a try.

1 thought on “Game review: Cleopatra and the Society of Architects”