This last weekend I attended ‘The Women of Sci-Fi’, a convention held here in Plano, Texas over Saturday and Sunday. I attended as a vendor selling anime models from my ‘hobby business’ RenegadeAnime.com (go check it out). After sitting on my rear for hours on hours there are a few things I’d like to say about my experience (and conventions in general). 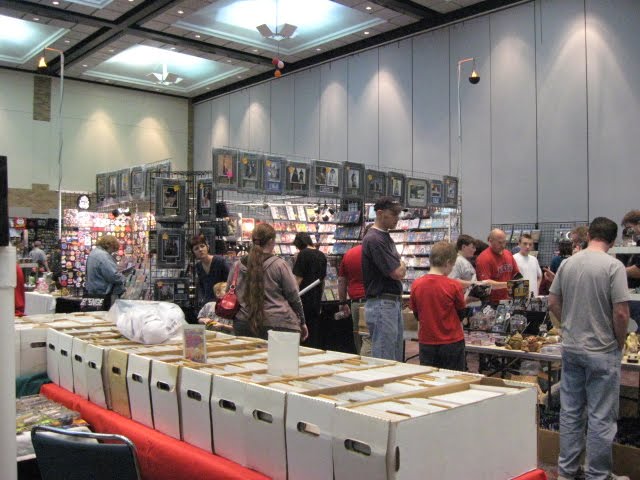 This is my 3rd convention to attend at this particular location. Chris and I first attended it back in 2003 after the collapse of my comic book shop Renegade Anime. I have been two other times since then but the experience is basically the same.

Let me first talk about my ‘business experience’ before I begin the whole tongue-in-cheek shtick. Every successive time I have been to this convention I have made less and less. My first trip was to expel the remaining inventory I had so my take was pretty good (about $600.00). My second visit in 2009 was about $400.00 and this final trip was the worse at about $270.00. I know I have a great range of products it’s just that the clientele is getting cheaper and cheaper with their money.

OK, fist off what can I say about Sci-Fi conventions that hasn’t already been said, lampooned, and stereo-typed. Well I guess I can say that most of what you hear and see is true. Everyone in that building (with the exception of people who were drug there by family or friends) are by in large on the geeky side… vendors included. Actually the vendors typify the clients that walk through the door. I can see that in myself and the fat, balding fifty something two booths down. Nerds unite! Anyway there is something about the brother hood of Sci-Fi nerds that attracts me. One thing I noticed about the fan base was the length of hair (at least in teenagers). I noticed that the ‘normal’ kids who looked like they were dragged there had shaggy, Justin Bieber type haircuts and almost all nerds has close cropped hair. Just something I noticed…

Next is that these conventions are the playground of the bootlegger. When you hear the word bootleg you think of bootleg videos. If you ever go to one of these you will not only notice the bootleg videos but a lot (and I mean alot) of ‘non-licensed’ merchandise. I am mainly talking about t-shirts. I wonder why studios and rights-holders don’t march into these places regularly and clean house. I’d love to serve these guys cease and desist orders.

So, I am sitting in my booth waiting on something… anything. A guy walks up with his wife (or something) and there is this loud gasp. I mean loud. He laid eyes on some models I have (which are reissues from the 70’s and 80’s). He see his childhood and freaks out in joy (via the gasp). I am thinking that I am sure to sell something… nope no dice. This is a very typical reaction, someone comes up and is totally into what I have to sell but then seems to become disinterested enough to no buy any of it (no matter how precious it was in his/her childhood). Go figure.

Take a good look at this picture.

This is Hank. Hank on the right (in the yellow) is Hank circa 2002. Hank on the left (in red with the long hippie hair) is Hank circa 2011. Hank sat next to Chris and myself back at our first show and just last week I saw Hank again selling comics (with his long hippie hair). Hank is a cool guy. Hank is also a lesson that Hollywood isn’t all so glamorous. Hank used to work in pictures. Have you ever seen The Time Machine (the more recent remake)? Yep, Hank worked on that. What did Hank do, you ask? Hank worked in payroll. Glamorous, huh? Anyway I thought I bring up Hank since Chris had the forethought to take his picture back in 2002 (thanks Chris).

Wait a second… I think Chris was taking Hank’s picture for some underhanded reason. See the guy BEHIND Hank… the guy with the gray hair? That’s author Paul Black. Why would Chris want his picture when there are famous people like Anthony Daniels just twenty feet away signing autographs? Well, as it turns out Paul Black is a self publisher. THAT is the reason Chris was interested in Paul. In 2002 I think Paul had just the one book. I saw Paul again this last week at the convention and he has four out now. He is still self promoting, hitting the pavement and making it happen. This is EXACTLY what Chris wants to do… if he can only finish that darn book! Paul, if you are reading this we think you are great and keep up the good work (drop us a line and we can do an email interview to put here on our blog). Paul even has his own WikiPedia Page… now that’s serious!

Well, that’s all from the 2011 ‘women of the spent penny’ convention here in Plano, Texas. This was the last convention that C2V (or whatever) ventures is having in Plano. This may at the big convention they are moving to the new convention center in Las Colians. Maybe I’ll see Paul, Hank, and lots of CASH there.