Welcome to the ninth part of the According To Whim Season 2 ‘Fix’. The editing I have been doing is in an attempt to rebuild Episodes 3, 4, 5, and 6 of our public access television show: According To Whim (Season 2). Season 3 Episode 1 was also lost so I have included it as well.

In this installment I will talk mainly about editing Episode 5 Scene 5. In this scene Chris (who is living out of his truck) is bugged by a beggar (played by my coworker Jonathan) for some money.
This was a scene that we failed to do the year before (during the six days of the initial shoot). If you notice all the trees are bare. It is winter when we shot it but luckily no one watches the show so no one will notice. Anyway we finally got together one day after work in Decatur (that’s where we work). Chris drove up and met us at the park that is near downtown. We shot this scene and a scene in the same location a few scenes later in the script.
I just happened to pick THE NOISEIST PARK in North Texas. It sits just off FM51 just out side of downtown. There is so much traffic noise I had to do a LOT of background noise editing to make it all smooth and as unnoticable as possible. We were fighting cars, kids, and trains the whole time. Of course by the time we shot the final bit it was like 50% less noisy. Here are Chris’ thoughts on that windy day in Decatur from an older blog post he did.
The shot was pretty straight forward. A long shot, a close up of Chris, a close up of Jonathan. We decided to do an over the shoulder of two lines of dialogue and a POV shot from inside the truck on a few lines as well (all for variety and to cover any goofs). Aside from the noise and Jonathan looking into the camera lens all went well.
Ofcourse you all know about the hard drive crash (I talked about it a million times and it’s my excuse and crutch for being lazy about Season 2 and 3). This scene was previously edited then lost so I tried to recreate it but add a little more (my new perspective on all this re-editing… add more to make the new edits better). I did a few audio over shots (where one character is on screen and the other is talking). This is how you fool people into thinking you had more than one camera when shooting.
I finished the editing of this part of the footage we shot that day and will be onto the next part (scene 8) later in the week. Which you will be forced to read… or you will love to read when we are famous and Keanu Reeves is playing Chris’ character and we are millionares in the not too distant future.
Viva La Entertainment!

Season 2 – before the EVENT, being frustrated 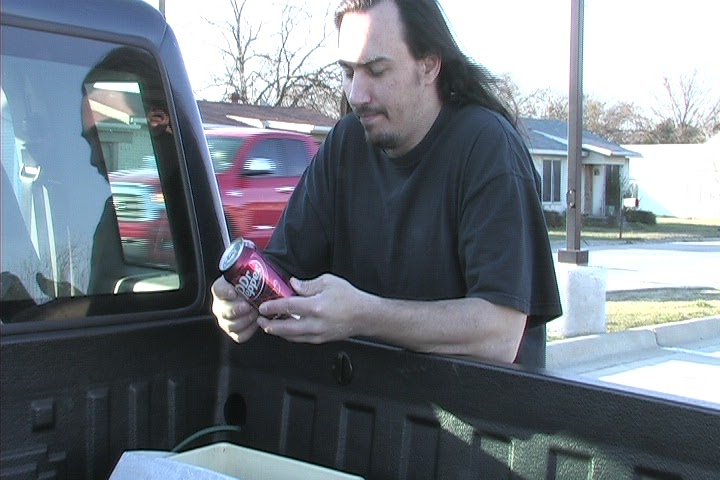