During the week of May 9th I finished a project I had been wanting to do for quite some time. As you might know (or not) I live in a rural area in Wise County (in North Texas). We have an acre of land that requires quite a bit of mowing and other yard work. When not in use the riding lawn mowers (2 of them) and lawn mowers and weed eater sits under the car port. This is also where my Volkswagen Bug sits along with the wife’s car. Any time I need to mow I have to back her car out to get the mower out.
For the last year or so I had been thinking of adding a lean-to on the shed I have at the back of my property. A lean-to is basically an extension of the roof, a car port if you will (but not for a car). I basically wanted a place to store the lawn junk so it won’t get wet and so I wouldn’t have to back out the car to get some work done.
It’s a pretty basic structure and wouldn’t be too difficult to build but getting the wood would be tricky. When I finally decided to get this done it just happened to be around the time that my truck was in Fort Worth for repairs and I had Chris’ truck. We both have Ford Rangers but Chris’ is an extended cab so it has a shorter bed. I needed to get some long lumber (12 foot timbers and some plywood) and I knew I’d have trouble getting it home with his pickup. I did get some 2x4s with little issue but I would have to wait to get the big ones. Once I got my truck back (which turned out to be like a month) I went and got the stuff I needed and got to work. 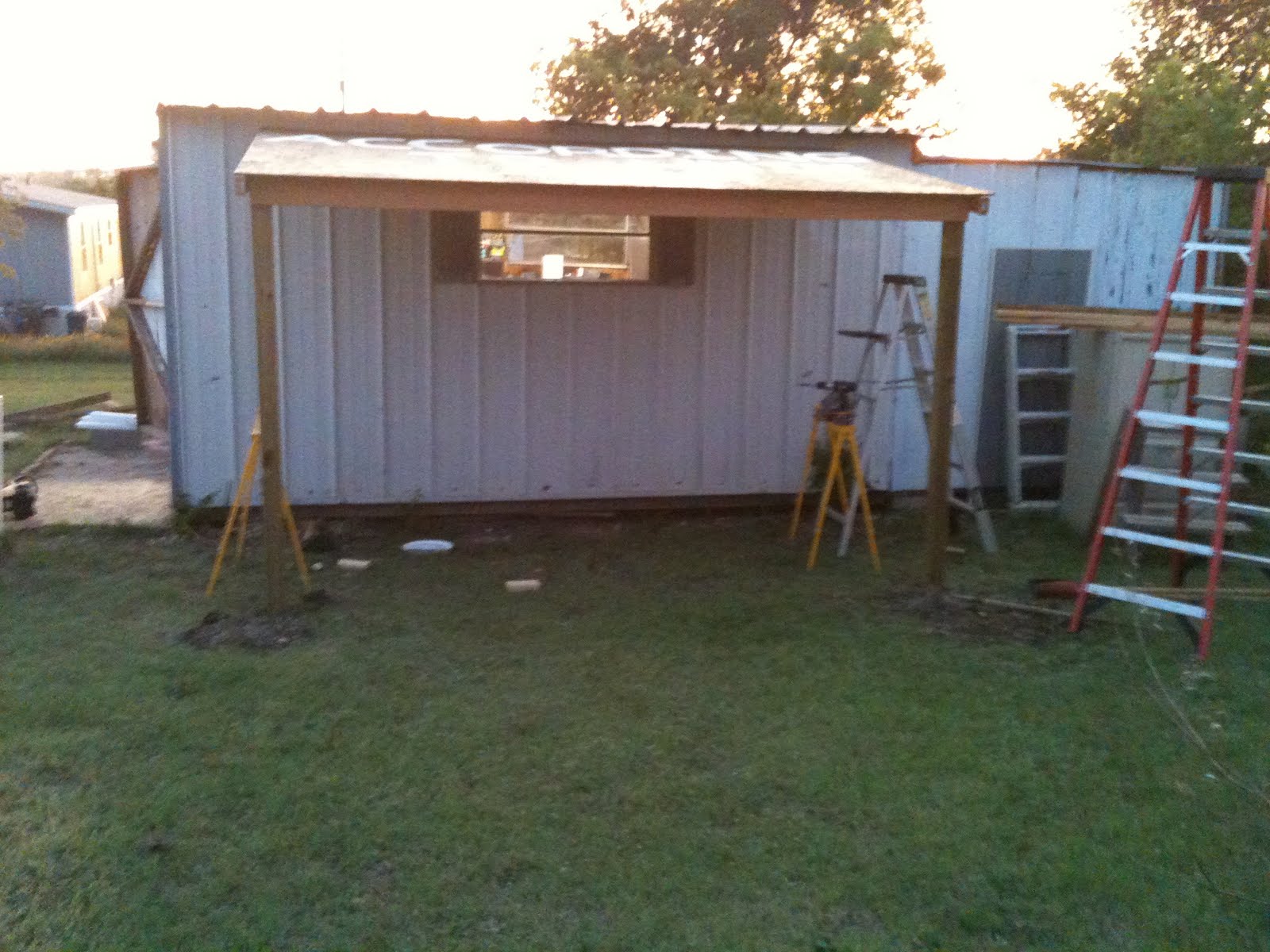 I basically made the lean-to 8×12 using three pieces of plywood laying long-ways from the side of the shed. This would also require two 4×4’s for the main legs, two 2×6’s for the front and back parts, and 4 2×4’s for all the other pieces. Most of the lumber isn’t too expensive until you come to the plywood. That stuff is very expensive. One piece of 8’x4′ plywood (the thinnest, cheapest one) was $17. I decided to go cheap and skip the plywood and I bought pressboard. You know that stuff that looks like it is made of wood chips all smushed together. It’s $5 a 8’x4′ sheet so it cost less for three pieces of that than it did for one normal piece of plywood. There is a reason for that of course… pressboard is shitty. It can’t get wet or it will start to come apart. Well since I was being cheap I decided to put metal roofing ontop of it. I got a shock there too since one 2’x8′ piece was $28! Just to cover the 8’x12′ roof it would be $168!!! Sheesh! No thanks. I decided to just use the pressboard and paint it thickly (to make it last a little longer) and save up money to get the metal covering one day in the future.

Now comes the advertising. I got my supports concreted in and everything ready for the roof part so I started painting the pressboard. I used some dark green paint that I got at a super cheap price at Home Depot. They sell returned paint for dirt cheap and I bought it a couple of years back but never found a use for it. I spread it on thick and then got ‘clever’. I took some white paint and painted out: ‘According To Whim.com’ across all three pieces of pressboard. My thought was that eventually Google will update their site and their Google Earth program and you can see my slogan on their satellite view! Talk about effective advertising!! 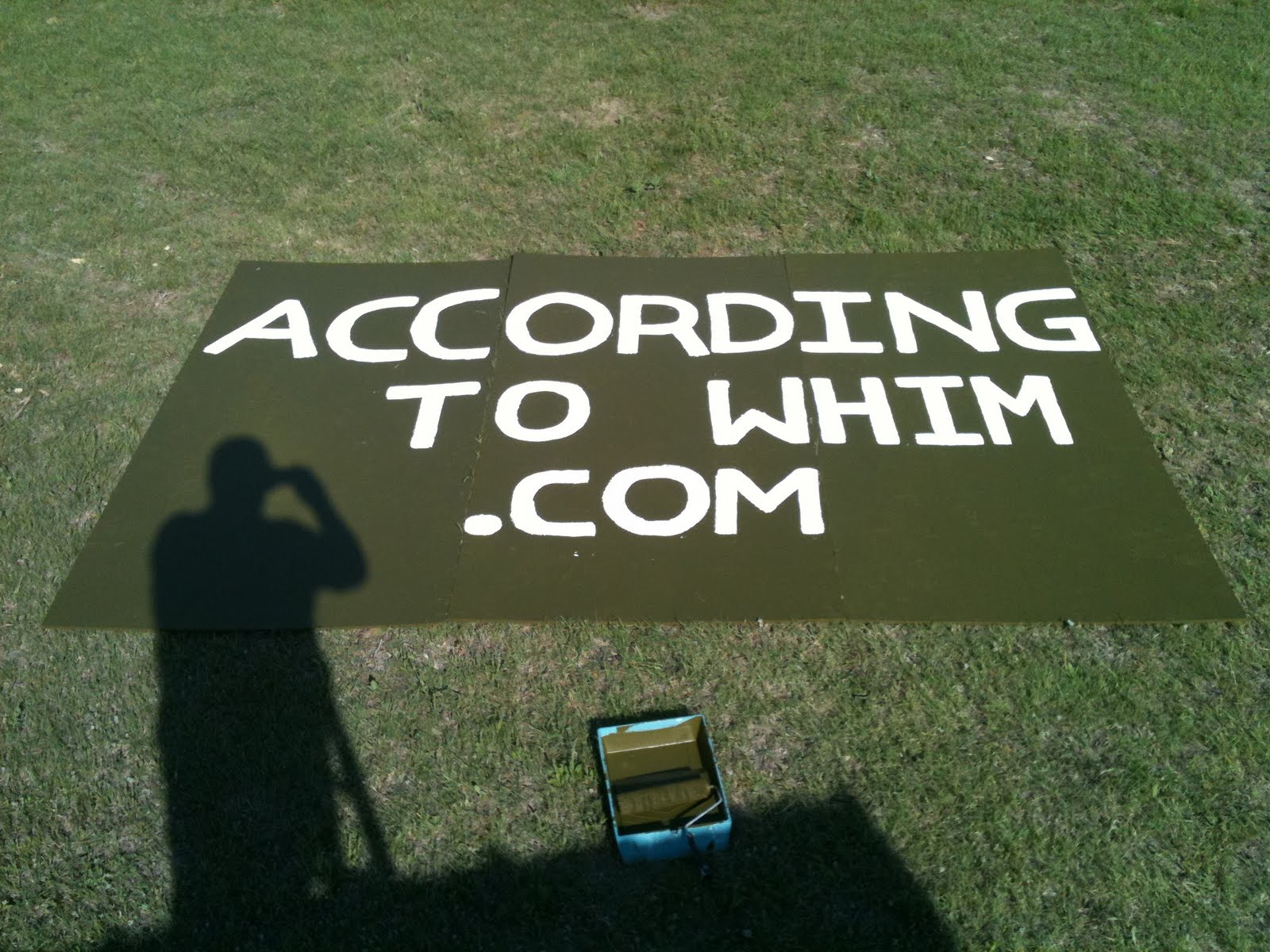 I don’t know if it will work out all that well since it seems that they use lower resolution images for rural areas (unlike the higher resolution ones for cities). As soon as it shows up I will post it for you guys and crow a bit. I have noticed that most Google satellite images are taken in Winter so you can see more (without the trees in the way) so I might have to wait until then to add a better covering over the pressboard. I hope that stuff holds out that long…
I moved my mowing stuff down there and now have no issues when it comes time to do any yard work. It also keeps the car port clean looking too.

UPDATE: The day I built the lean-to it was raining lightly and within the day each of the three pressboards were bowing downwards. Cheap junk. I knew this was going to happen I just think it would happen so quickly. I got some 2x4s and made cross beams and straightened them back up.

UPDATE: I got on the roof of the shed and leaned over and caulked the joints where the 3 pressboards meet to ensure that the rain wouldn’t just go inbetween the boards and leak below. I am hoping this is all I need to do for now. I might be putting metal ontop of that sooner than expected!