Diablo 2 came out in 2000. It’s an old game OK… This review is being done because I have started playing it again. It’s that good. In fact there are several websites devoted to the game that are still updated regularly. Diablo 2 is a ‘hack and slash’ type game. Here is a screen shot of what it looks like: 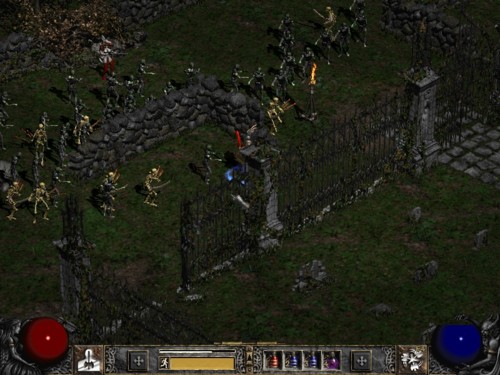 What makes this game stand the test of time (11 years at this point)? There are probably a few factors and here is a list:

Let me first cover the character customization. You start the game as any one of several character types. I have played the Amazon (who shoots arrows) and Sorceress (who shoots magic). I have played the Barbarian but I didn’t like the ‘up close and personal’ combat you have to do with them. As you kill more and more monsters you gain experience and increase in power, strength, magic, and life. You choose how to spend these ‘upgrade points’. You also get points to spend on magic abilities you character has. You literally choose how to customize you character in every way. This can create different experiences every time.

Probably the biggest draw to the game for most is the gear you find. Along with every aspect of the character being able to be customized, you can further customize game play by the way you equip them. I have played this game for years and there is such a vast pool of items that I never run into the same item twice. It was Blizzard’s (the company who made the game) way of item generation that was clever enough to keep the game play fresh when it came to items. You have all kinds of weapons, armor, potions, magic runes, jewels, gems, and charms. You have basic weapons then you have magical items (that have extra abilities). Some pieces of armor (which included armor, helmets, boots, gloves) as well as weapons have ‘sockets’ where you can insert runes, gems, and jewels for even more special abilities. This sort of customization gives the game even more flavor.

As you progress through the 4 acts of the game and the additional act of the expansion (Lord of Destruction) the monsters get tougher. Once you beat the final boss you can continue to play the game (from the beginning) in two additional modes: Nightmare and Hell. These are even tougher and allow you continue to level up your character.

In addition to the stuff I have listed above the game is well written, has good music, and beautiful graphics (none of that 3-D stuff I hate). Diablo 2 also has (as a major feature) the online mode where you can play co-op with others. I only ever play the solo game but most people play online.

If what I have written has made you even the remotely interested go and try it. Like I said the game has been out for years so you can pick up the base game and the expansion together for DIRT CHEAP!