In my last post I started writing about what happened in San Antonio at the Texas Comicon. Today I will pick up the story about my selling at a booth there and finish it out with the money totals and my impressions. 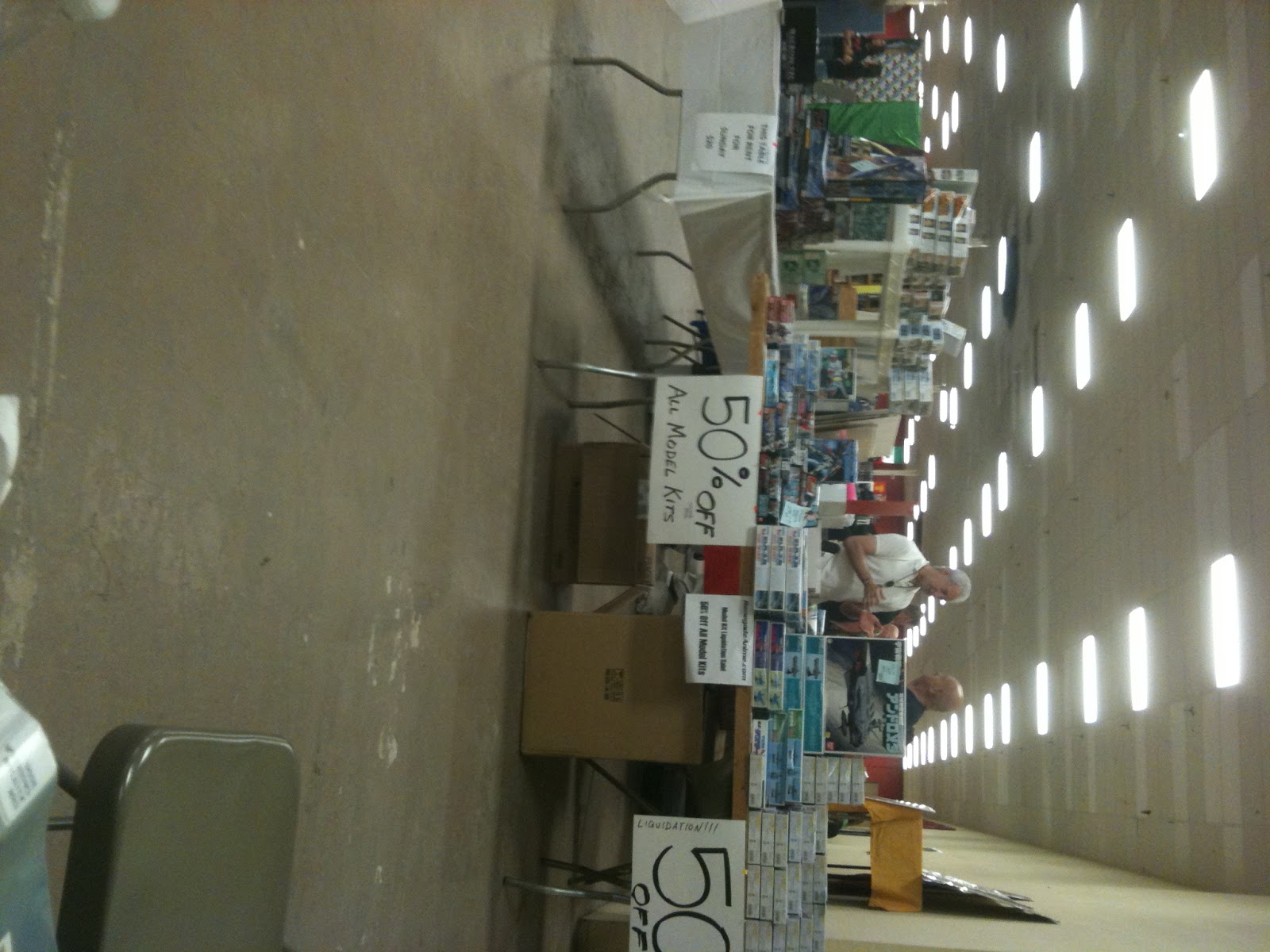 That’s Brent Spiner at my table… no really… well no.

Before the show actually opened (while I was still setting up) a guy came by (who was not a vendor so I don’t know how he got it). He was interested in all of my Gundam Wing model kits and bought them all ($156 worth). I gladly sold them (only wishing I had marked them up more). Like I said before once the show opened it was really slow. I figure most people were going to wait until Saturday to come out… at least I hoped. My wife got some pictures (I kinda forced her) with some of the people in costumes while we hung around, not getting hardly any sales. As we were leaving I noticed that the parking lot was taped off and there was a sign stating that event parking was $3. I couldn’t believe this. They were charging people to park in the event center’s parking lot for $3 a pop.

At the end of the day we covered our tables up and left the show. We ate at Red Lobster (at my prompting) then made a stop at Garden Ridge. The show ended at 6 on Friday so we had some time to kill before going back to the hotel. That evening I sat in the room and watched King of Kong: A Fist full of Quarters on one of the ESPN channels. I had seen it through NetFlix and really liked it so I basically watched it all again.

The next day we got there and got ready. This time there were people waiting to get in. They opened the doors and the slow trickle started to become a roar of people. It still wasn’t Dallas Comicon crowds but it was much better than Friday. I went out side to the truck and saw that there were like 600 people waiting in line to get in! I was really excited. Over the next two hours the crowd got bigger and bigger inside.

For some reason the Texas Comicon had a lot of people in costume… alot. I am guessing that one in five people there was in costume. I like to say that people who come dressed up in costumes are attention whores but that is a huge rude generalization… but in some cases it’s true.

I sold fairly well on the 2nd day… once again not to Dallas Comicon standards but fairly well. We needed to head out on Saturday before it got too late so we wouldn’t be getting home too late. Earlier in the day the guy that was running the table next to ours stopped by and pointed to the box of NetRunner boosters I had and said he had some and would I like to buy them from him. I said sure (not knowing if he had loose cards or a booster box). He brought over a sealed box of Proteus boosters! I asked him how much and he said ten dollars! I bought them and hid them as quickly as possible in my stuff… NOT FOR SALE. Even if things didn’t sell well the coup of finding a box of Proteus boosters for ten dollars made the trip worth it! In secret gratitude I offered the guy the use of my booths for the rest of Saturday and all of Sunday since I was not staying. He also told me he had some loose cards at home and would email me with a price. I am eagerly looking forward to that.

We headed home and got there at about 9:30pm. All in all I sold $650 worth of stuff. Very little of that was profit and when you calculate the cost of gas to get down there, hotel room for two nights, food, etc I am sure I made little to no money on the total deal. The Proteus box will bring me back into the black once I sell it on Ebay. In the end I have decided not to go back to the San Antonio Comicon and if for some reason I do (like a change of venue) I will only go on Saturday and Sunday, not Friday.

There were plenty of people there but no one seemed to want to part with much money. I am guessing its a combination of the economy and my product base. I will just keep on trucking and making by bigger profits online.