This is the third part about my efforts to refurbish a mobile home my mom has where the last renters TORE IT UP big time. I have basically given you the back story and what I thought would be needed to get the place in a decent enough state to rent out.

This post and the next took place on the weekend of July 2nd and 3rd. My wife worked that weekend so I decided to go out to the house 2 days in a row to catch up. I have had to take off a few weekends so it really slow going.

On Saturday I began doing some smaller items all over the house and finishing up the floor I started the whole project with. In the end it seems doing all the little stuff is what gets things done in the end. The first thing I got to work on was the water connection in the kitchen. The washer connection was rusted on and when they moved out they just cut off the hose. This wouldn’t be such a big thing but the connection’s shut off doesn’t work so I would need to put a new cutoff on the end. I couldn’t get the rusty hose off so I couldn’t add a cutoff. I tried letting it soak in WD-40 but that didn’t work either. I was really pissed about this because you can’t do much cleaning up if you can’t use the water. The broken cutoff was broken in the ‘open’ position so once you turned on the water to the house the washer hose would just shoot out water. I gave up after an hour or so and went to Home Depot and bought the parts to replace it. One of the things you run across with old mobile homes is that back in the 80’s they used a type of PVC that was shitty. So shitty that it was eventually recalled. This stuff if really hard to fix. It had to do some really complicated stuff to get the patch to the new cutoff to work. It was only a temporary fix and I will have to go back and fix it right later. I could now at least turn the water on.

With running water I started by scrubbing the bathtub. It looked horrible. I don’t understand how people can live like this. I only took me twenty minutes to make it look decent, why couldn’t they have done that? I also replaced the toilet seat and generally cleaned up the bathroom. 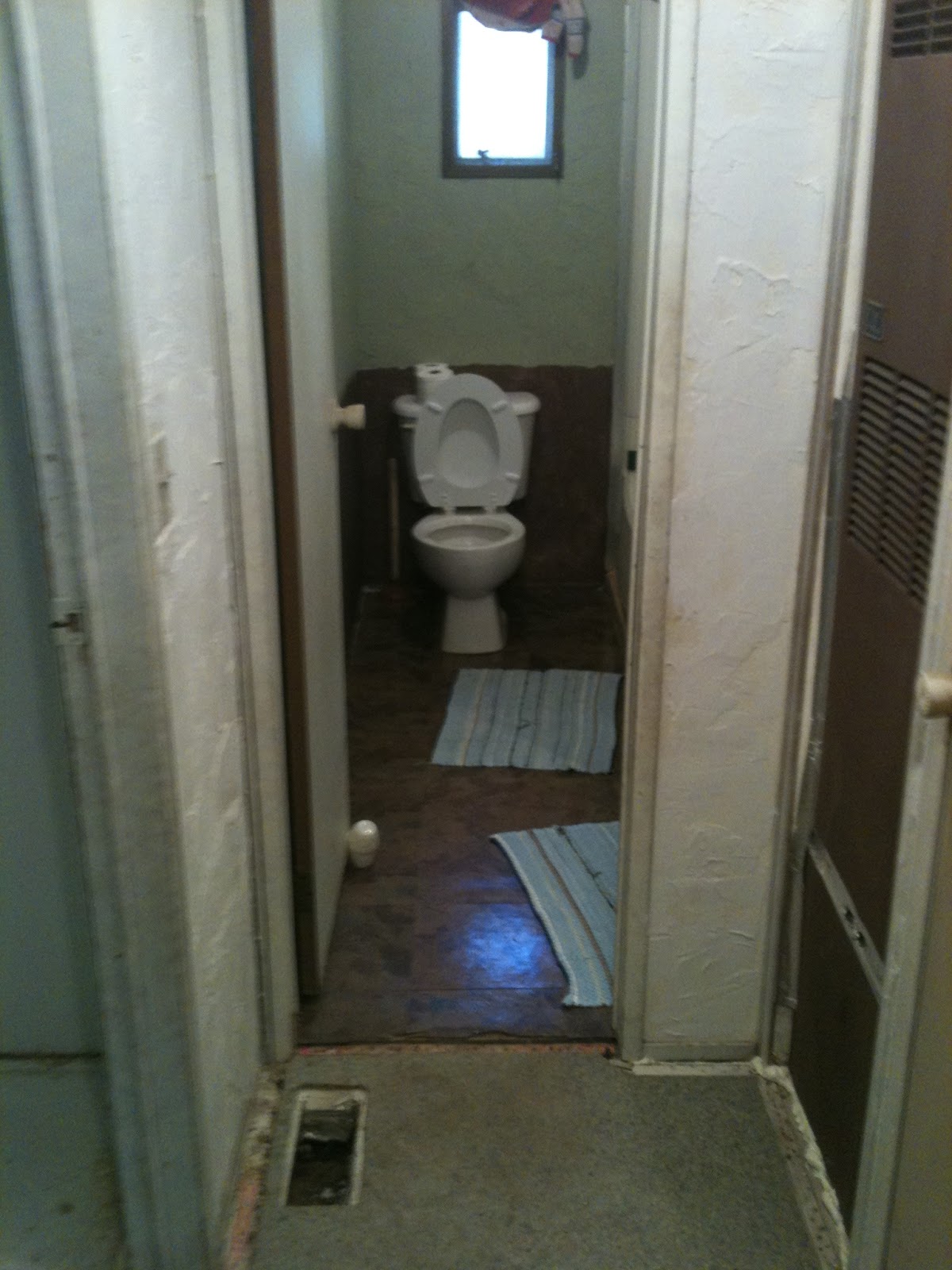 Looking into the bathroom (no carpet in hall) and texture and no paint… sheesh.
Between all these smaller items I worked on finishing the floor in the smaller bedroom. If you remember I had to tear it out and put new floor in. With the strange cuts that I had to make it made for a LOT of supporting boards to be added below. I finally got them all and put the plywood down but there several places where the old floor and the new one met up that were really off. The expansion of the crappy particle board made the floor ‘thicker’ in several places. I would have to think about how to fix this while I worked on other stuff.
I started peeling some home made wallpaper off the wall in the main bedroom which is a big mess. They laid it on top of the raw wall (it was never painted after it was textured). The one way you take wallpaper off the wall is to soak it with water. The problem is that the texture (when it gets wet) will just start to get soft again. When you are trying to take off wallpaper you start gouging the wall. I stopped after awhile and will have to come back to it. I also worked on some of the holes I started patching last time. I touched them up and looked for more spots to patch. 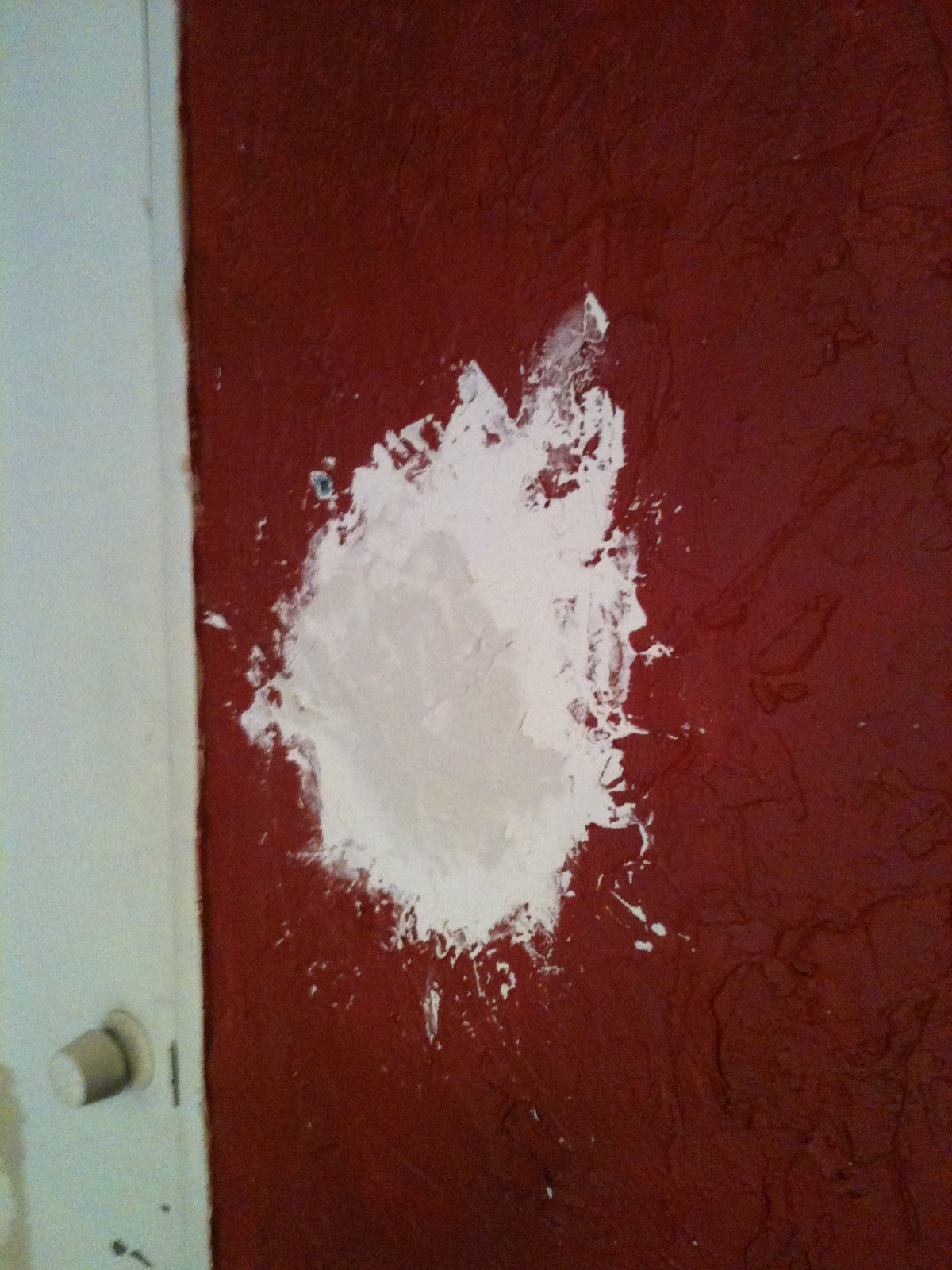 A big hole now patched.
I also stopped and did some cleanup outside. There was (and is still) quite a bit of trash in the yard. I got a full trash bag worth (a contractor trash bag at that!) and will need to do some more cleaning.
I called it quits that day and went back the next day (which I will cover in the next part).