Today’s installment is the 6th part in my series about renovating my mom’s rent house. I only get down to Joshua once every week (usually Saturday morning) but this last week I was there on Friday and Saturday.

In part 3 I started talking about the ‘home made’ wall paper they started putting on the walls of the master bedroom. That shit has been haunting my dreams for a long time and I just knew I’d have to deal with it sooner or later so I decided to get on with it. Apparently they took paper bags (yes grocery bags) and glued them onto the wall. Here is where it really sucks… when this guy re-textured the room he didn’t ever bother painting it. This means the wall paper do-it-yourself job is glued right to the actual masonry of the wall. 🙁

I got a fan on me (it’s hot in there) and sat on the floor for about two hours and ripped and scrapped the walls until I got 99.9% of the paper off. This meant using a box cutting blade thing and scraping the top layer of wall texture off. If you look at the wall in those areas they really look crappy after all that scraping but I hope with everything being painted white you won’t notice it much. I also did some patching of the scrapped areas to fill in the larger scratches from the razor blade. 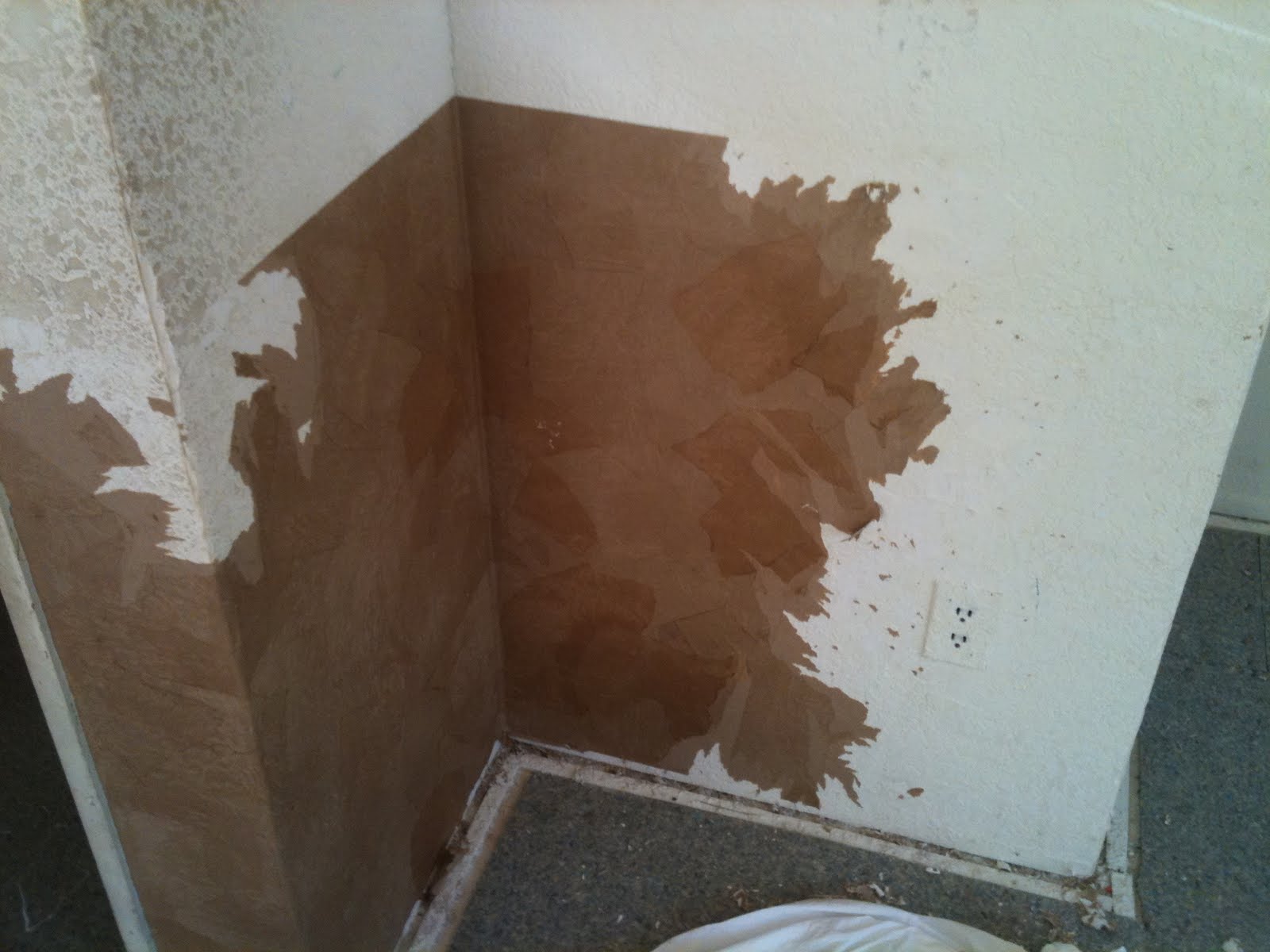 Wall paper glued directly to the texture.
During my 2 day fun-fest (sheesh)… I also finished caulking the bathroom walls and ceiling gaps. I brought my handy-dandy shop vac and cleaned out the smaller bedroom as much as I could then prepared to do some painting.
I brought a paint sprayer that my late Stepfather bought but never used. I thought it would speed things up but man was I wrong. Once I got the thing figured out I quickly realized that I would suffocate to death if I didn’t open a window or stop all together. The sprayer also came with a roller attachment so I decided to use that as well. I attached it and tried it out. It was alright. I basically keeps you from having to re-dip your roller to fill it back up with paint. The attachment is clumsy and I wasn’t very impressed with it. After I got most of the room painted I decided that I will just finish the house with the traditional paint roller and techniques.
I took me a good thirty minutes to clean the paint sprayer properly so I don’t think I will drag it out there again. It seems like a good tool if you are doing a really big project but for my one room at a time job I’ll just pass.
It seems like I didn’t get a lot done (and I guess I really didn’t). It was stuff that did need to get done but was a pain in the butt to just start doing. I will go back next week and do some more painting and I also plan to rip up some old kitchen sticky tiles in preparation for that mess.