This is the 7th part of my series on renovating my mother’s rent home in Joshua. The previous renters really tore the place up and it is up to me to get it ready again. Most renters have to sign a contact but the people who lived there were friends of my late step dad and never did. He did a lot of modification to the house but he never finished ANY of it. It has been about four months now and I have been going down there for a couple of hours each Saturday to work on the place.

This post will cover the last couple of times I went and worked on the house. I didn’t do enough to warrant a blog post for both days.

The back bedroom (the one where I fixed the floor) was ready for some more painting. The last time I was there I used that paint sprayer and I felt it was more trouble than it was worth (with all the cleanup). I broke out the paint roller and started painting the old school way. This was week before last because I remember that the temperature had actually dropped and it was raining! I put the box fan in the window and got on with the painting. I quickly had second thoughts about the paint sprayer since it was easier to use. I have also noticed that the ceilings need to be painted as well and the paint sprayer would work well there. I did some painting (leaving the green accent painted walls alone) and wrapped up for the day.

This last weekend I had planned to bring back the paint sprayer and do the ceilings in the little bedroom but when I got there the water wasn’t working. Since I am so unsure of the quality of the pipes in that house (it’s the old nylon gray PVC) I turn the water off when I leave each time at a valve at the back of the house. When I turned it on this last weekend water wasn’t coming out. I am not sure if there was a problem form the water company or if there was an issue with the worn out plumbing. Either way painting was out of the question since I need lots of water for the cleanup. I instead decided to do some random little stuff. I pulled out the broken glass form the from bedroom windows and pulled them apart and cleaned them thoroughly (they were nasty). I also did some shop vacuuming of the window sills and various other things.

I loaded up my pickup with the old fridge and and other assorted junk to take to the dump on Monday but once I got it all in and was ready to tie it down I realized that I had pulled the tie-downs out of the truck last week. Doh! I just dumped it all back onto the driveway. I am thinking I will just get everything that needs to be thrown away into a pile and have someone come haul it off.

I brought my water hose to water the dying shrubs and about twenty minutes before I was going to leave the water started working so I watered. I also did some trash cleaning up inside the house and took some measurements to replace the glass from the windows. Before I left I pulled the gazebo down that was sitting on the driveway. The covering was ripped badly and I thought I’d better get it apart and in the new trash pile. 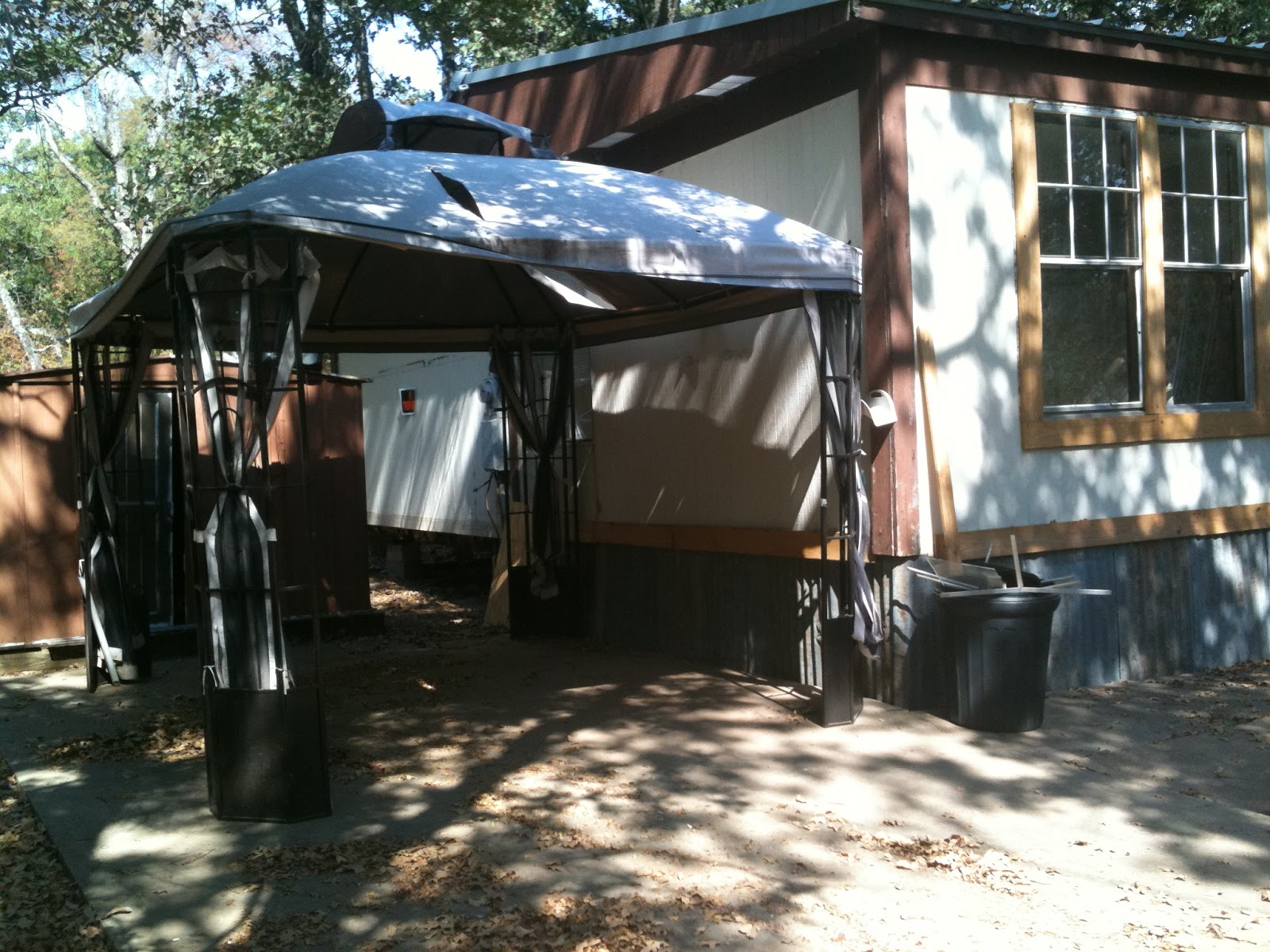 That was it for that weekend. I think my next trip will include working on the trash pile so I can get it hauled off. There is quite a bit of stuff to throw away so I will focus on that next. After that I need to get back to painting and the kitchen floor (the one big thing I am putting off).