Saturday night was Hangman’s House of Horrors VIP night. The charity has a party for their corporate sponsors and an awards ceremony to give out award plaques. Once again According To Whim was slated to get an award. This time we arrived to the party as guests, not there to film it. Last year I got the award for our group so I decided to let Miguel get it this year. He put more hours in on the house than I did so it seemed only right.

This was a very busy weekend in general for me as well as for the whole North Texas area. On Friday the wife and I went ‘RV’ing’ with some of her coworkers out at Benbrook lake so that ate up Friday into early Saturday. We headed back home where I got a few hours respite. I needed to be at Hangman’s for the party at 7PM. The wife wanted to go but got called into work so she was a no-go. Miguel was going to bring his daughter but it turned out that she had a slumber party or something to go to so he brought his wife.

Miguel’s wife has been given a lot of grief by Chris and myself as to the reason Miguel never does anything anymore (creative wise). She has been the easy target for so many years but I’m 90% sure it’s never really been her. She is just an easy scapegoat for Miguel’s missing creative side and/or laziness. Miguel can’t seem to step up and tell us to shut the fuck up about his wife either. Sorry turd.

Anyway I headed out a few minutes early so I could drop off some books at the downtown Fort Worth library. As soon as I got on 35 it was a nightmare. Apparently the Alliance air show just ended and everyone was heading back into the city. 35 was jammed and it took a lot longer than I expected. Luckily I am the kind of person who always allows for time so I wasn’t late. I dropped off the books and went down 7th street to work myway around to the haunted house. Well 7th was packed now. The 3rd World Series game was about to start and EVERYONE was out cramming into bars in the area. As you might know that part of West Fort Worth is loaded with bars so that was fairly annoying too. I finally got there just in time to meet Miguel’s wife out front while Miguel parked. We all went in together on time. The VIP party is held in a tent they put up in the middle of house grounds. Last year the party was packed and Miguel and I had to squeeze our way around in there. Thanks to the World Series game the party was only about half full this time (despite having 4 TVs in the tent broadcasting the game). The Rangers were in the World Series last year too but apparently there was no game on the same night as the party.

We sat around for about an hour, eating the finger foods and drinking (sodas). I picked up a T-shirt while I was there too. At 8 we all went out side to the Karaoke stage where the presenting was going to happen. Again this year Rebecca Miller of CW33 was there along with KSCS’ mid-day chick. They did the presenting (with Rebecca’s microphone malfunctioning the whole time). Miguel’s name was called and he went on stage and got his award and his picture taken. 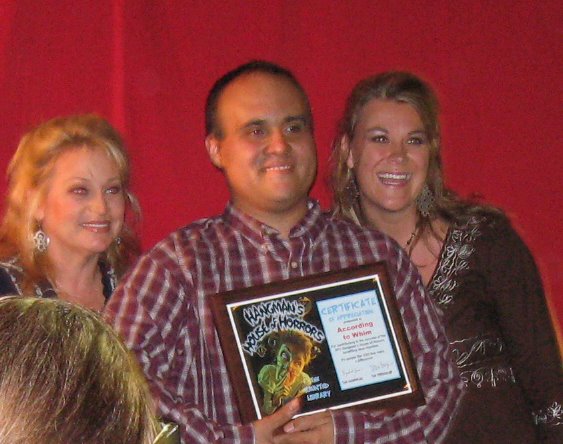 After that I packed it in. Usually after the award ceremony the VIPs are let into any of the house they want to go in. I had seen enough throughout the year not to want to go through it again. I headed for home and hoped to have the rest of the weekend to chill out.