It’s that time of year again. A time when happy childhood memories abound. Christmas (or should I use the politically correct liberal don’t offend anyone at anytime ‘Xmas’) is about family get togethers, eating, and opening presents… at least American Christmas is.

I watched or read something years back that said that the modern form of Chrismas was a purely American creation from the 40’s or something. I can’t totally believe that cause just read Charles Dickens. There was apparently family, food, and gifts back in the day too. I guess the commercialization is what was American about it.

As far as that goes I am fine with it. Most of my happy childhood memories are about the junk I got at Christmas. That’s what kids like, getting junk. I can still remember Christmas evening in my living room playing with my spanking new Death Star Playset listening to ELO on our massive stereo cabinet in the late 70’s. I remember another Christmas when there were so many presents that they took up half the floor of the living room. I remember getting Castle Grayskull and Snake Mountain for Christmas and being so content that I didn’t leave the world of He-Man for years to come.

One year I asked for the AT-AT walker from Star Wars and knew I was going to get it. I spent the proceeding two months up until Christmas playing with my Star Wars guys in a scenario that included an ‘invisible’ AT-AT walker that they had to get to turn visible so they could use it. Christmas day arrived that year and a suspicious big box was under the tree. I knew it was my fabled toy but my brother sewed seeds of doubt by saying it contained nothing but underwear for me. When I opened it I found what I desired… the Empire Strikes Back Imperial AT-AT Walker. I have the photo to prove it… 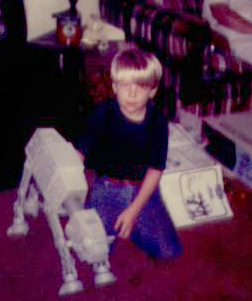 I have to admit that I realize that getting toys is not the real reason for the holiday but it certainly helped me have a happy childhood and lots of good memories.
As the years go by the magic of Christmas fades away. The endless browsing the BEST, Sears, and JC Penny catalogs, marking the toys I wanted so my parents would get the right stuff has transformed into me browsing Amazon.com buying myself what I want or send the list to my mom or wife. The magic has seemed to go away. I guess it’s because I’m not a kid anymore and those simpler pleasures don’t excite as they used to. I do usually get what I want so there isn’t anything that get shoved in the back of a drawer or into a garage sale.
I try to get in the spirit every year but it is tougher and tougher. I don’t have any kids and that might one of the reasons I don’t easily get into the spirit as an adult. When my nieces and late nephew were kids it was fun to buy them stuff and see the joy and excitement on their faces.
Don’t get me wrong, it’s nice to spend Christmas with your family and all. That is the best part of Christmas for me now-a-days, it’s just there is something missing. I think what’s missing is youth. We are a very small family now and my wife is the youngest of the bunch (if you don’t count my niece but she is in another state) and is hardly a kid anymore.
So here’s to hoping that the magic of Christmas returns to me in some form or fashion. I hope the same happens to you and yours as well.
Merry Christmas!