Chris and I got together and played a few games, Escape the Curse of the Temple and Miles Borne, so I thought I’d give you the 5,000ft overview of both. 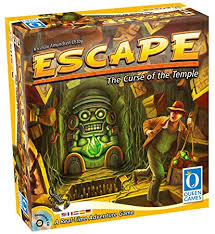 If you don’t know about Escape the Curse of the Temple, it is a real time cooperative game where you explore a temple as quickly as you can and escape. The game is played to a 10 minute timer. You can use the enclosed sand timer or the Audio CD soundtrack to track your game play. You and your fellow explorers constantly roll dice in order to get the right combinations to reveal new chambers, get into the next chamber, remove curses, open treasure chests, and obtain gems. The whole point of the game is to move from chamber to chamber, finding chambers that let you reduce the number of gems you need to escape the temple. Twice during the game (around the 3 minute mark you have to try to make it back to the temple entrance). On the final 3 minute stretch of the game you need to make it to the exit, then roll to see if you can get out.

Like I said it is in real time and each player is in their own world, trying to roll those die, so you need someone who is honest to play with. Yes, you will make mistakes sometimes, but if someone is a cheater it ruins the experience. Playing under the specter of that time limit and the mysterious soundtrack can get intense, especially when the music speeds up.

You can play the basic version of the game or add in the curse and treasure cards for a more difficult game. I think we got out twice and lost once. Simple to learn and quick to play (10 minute hard time limit).

The 2nd game of the night we players was Parker Brother’s Miles Borne (aka Mille Bornes). This is my 1972 edition that I picked up at a Goodwill many years ago. It is a card game where you go against your opponent, trying to make it 700 Miles in a road race. 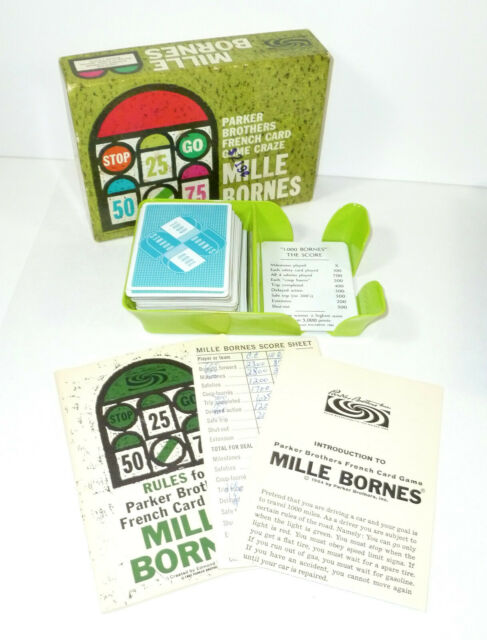 The game is won by gaining points while trying to sabotage your opponents. The game was created in 1954 and like I said it is French so the cards are bilingual. This bilingual text is not in the way things are bilingual nowadays, it is done for the theme of the game, not to make the product sell-able in more regions.

Each player draws a card and plays a card. You must play cards that allow you to ‘Go’ then you can play mile marker cards that get you to 700 miles (or 1,000 miles if you are feeling lucky). Your opponents can play various hazards to slow you down or stop you until you resolve the issue and ‘Go’ again.

Chris was in the lead for the majority of the game and I was forced to go for the 1,000 mile mark to keep him from winning. It took me over the finish line by a hair. The various rounds that made up the game took us about 30 minutes total.

Nathan Stout is not good at word games and Chris knows and exploits this.