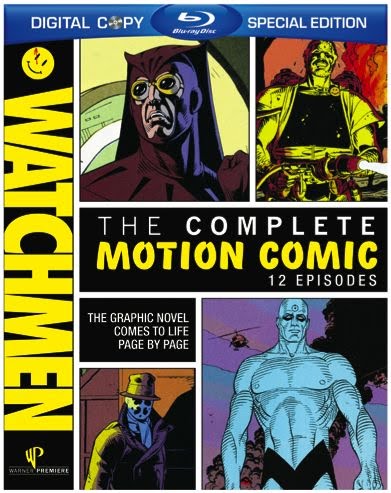 I just wanted to talk about a Blu Ray disc that came out a while back. It arrived shortly before the movie did. It’s Watchmen The Complete Motion Comic.

This was the first Blu Ray disc I bought and I am still happy with that purchase. It was like thirty bucks but I still feel like I got a deal on it.

It’s basically the actual comic book, reformatted with some minor animations and a narrator. The images have been remastered and looks clean and super sharp. This is a real treat to watch.

The is only one guy narrating it so he does the female voices as well. I guess it would be a little strange for the average viewer but I listen to a lot of audio books and you hear that sort of thing all the time.

It’s the whole comic book and it takes several hours to watch. I suggest watching it by episode (there are 12). The move was fairly close to the comic book but of course it had to have a Hollywood ending so you will find a bit different at the end of the motion comic/comic book. It’s far more of a let down as opposed to a ‘lets go superheroing!’ Hollywood ending.

The animation that I mentioned that I said is ‘minor’ is actually quite a lot. I said minor because if you are watching something animated like this you might expect a cartoon or something. The animation is actually quite impressive. What they did was take each scene (box on the page) and edit it in a way that various parts move with the action including some complex 3-D animations. It looks like it was very time consuming to do. Maybe that’s why I like it so much. It looks hand-done but it was probably done in Flash or something.

Anyway you get a lot for your money and a visual that you really enjoy looking at (at least I do, I love detail). It’s a very interesting and ‘rare’ form of entertainment. I wish there were more great comic books in this format.