Cameras cameras everywhere
in your nose and in your hair.
In the sky and in the air
and even in your underwear.

How about that for a fine piece of dogeral? Over the years we have used a plethroa of cameras to shoot the show. In this informative blog, I will tell you a little bit about the cameras we have used, as well as information about those cameras. Enjoy.

Back in the day Miguel and Chris used a Super VHS camera (as well as a regular VHS cameras I’m sure) to shoot their public access show “Sniffles (sniff).” Miguel has a whole story about the camera that you can read in his Show History. When I showed up on the scene the Super VHS camera was long dead (I suspect) or something horrid happened to it (like the probably historically innacurate version of events here).

In 1999 when Chris and Miguel showed up together (I think it was for the first time ever) at my house we shot a sketch (which you can read a little about here) and Miguel used a newer (at that time) Hi-8 camcorder.

Let me give you a trival run-down of camcorder formats starting from lowest picture quality to highest (PS: I won’t get into Betamax stuff) (PPS: The first 5 are ‘analog’ signal recorders and the rest are ‘digital’):

The reason the last 2 on this list rate at ‘better’ in quality to something like the more popular Hard Disk Drive is that the Hard Disk Drive and mini DVD compress the footage whereas the Mini DV and the Micro MV are uncompressed.

Ok, back to the story…

Miguel used his Hi-8 camera for quite some time (until it was a ragged piece of crap actually). In 2002, I purchased a camcorder I had my eyes on for quite some time, the Sony VL-NZ100U. I was captivated by the design of the reversable screen. This was a perfect camera for filming a public access show! I first saw this type of camera used on a PBS show about some inner-city teens using them to make video diaries. I instantly saw the advantage of using the rotating screen for filming yourself. I looked around and finally decided on this particular model, and got it from Best Buy (financed of course).

We started shooting According to Whim with this camera, and at one point we made a Blair Witch parody. The sketch is basically shot like the movie (from one camera) but we needed to shoot one scene that utilized a far shot of Chris and myself walking through the forest (this occurs at the 4:32 mark, its a bit fuzzy with this internet video). For this shot we needed to appear to be carrying the camera (that we had been using the entire time). Well, I didn’t have a second camera so we fake shemped the camera using a large television remote control. I basically hold the remote in the same fashion as I held the camera and it’s the same color so no one is the wiser (except you). That camera shot 90% of season 1 (and then some).

During the time season 1 was filming (the later part) I got a job at Target in Burleson (Texas, that is). I worked in Electronics and always got a leg up on clearance deals. When a department ‘conversion’ swapped out old video camera models for new ones, I got a great deal on a display camera. It was a Samsung SDC107. This camera wasn’t as clear as the Sony, but it was such a good deal (75% off) we couldn’t pass it up. We now had a backup camera!

Things got even better several months later when it was time to throw out an old Canon end cap display. Here is the lowdown… Canon sends this display that gets put on the end of an aisle. It displays three items: a camcorder, a camera, and photo printer. 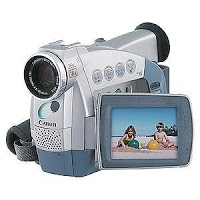 So anyway the displays seemed real enough. The customer could pull them off their pedestals and examine them (they were on these metal cables). I examined them a bit, and thought that when we were supposed to trash them, I was going to ask to have them, so I could use them in a sketch like that one I linked to eariler. I could write a little sketch, and have one of us accidently destroy some great new piece of equipment. The day came to dispose of the display. I asked, and they said I could have them. The more I looked at the camera and camcorder, the more I realized that they were actual (and hopefully) functioning devices. The printer was hollow, but it looked like the camera and camcorder were real. I took them home (making sure I appeared to consider them pieces of crap displays instead of the hidden gems they were). When I got them home, I put some batteries into the camera and it worked! I figured the camcorder worked too, but I would have to order a battery and power cable for it. After much searching, I think, I found them on eBay. The camcorder worked perfectly! This was a double score on an epic scale! Just a note; all three cameras I had at this point were Mini DV. Chris was never thrilled about the Samsung or the Canon (especially the Canon). He says the video quality sucked compared to the Sony. I never really exaimed them though.

We finished up season 1 and things died down. Chris borrowed the different cameras at different points through the years, and we would shoot little sketches here and there. Over time, issues started cropping up with them. I believe at this point the Canon stopped working altogether (no video). The Sony has had dirt issues (messing up the image) but we resolved that. The Samsung was still just kinda crappy (but it works).

In 2007 I decided I needed a new camera. I didn’t want just any old camera… I wanted something special… something that said ‘I’m legit, don’t bother me’. I searched and researched and decided to buy a Canon XL2. This is a 3CCD (broadcast quality) camera. It utilized Mini DV tapes, and had so many buttons, I can’t begin to tell you what they all do.

Chris calls it the Jedi Cannon. This camera blows all the others away (quality wise) however it is cumbersome to haul around. It does however scream, ‘I’m legit,’ which is something Miguel really likes about it. If you are doing ‘for pay’ work, people are impressed by it and don’t feel you are some yokle with a home camera ripping them off. I quickly discovered that the smaller, lighter tripods just won’t cut the mustard with this camera. I set it up once on one of my smaller tripods, and the hinge that you move it around on fell forward, becasue it couldn’t handle the weight of the camera. I nearly crapped myself. Luckily, I caught the camera. We shot the whole of season 2, and soon to be season 3, on the XL2.

During this time Miguel also upgraded cameras. He bought a nice Canon ‘prosumer’ model. I hate that word. Its like synergy, a phony word that has worked it’s way into the American lexicon. Anyway, Miguel’s camera is very nice. It will take images similar to the XL2. It also has a Hard Disk Drive to store the video, which makes it so much easier to transfer it to the computer.

As a side note, I sold the Sony to Chris. He uses it for whatever depraved stuff he likes to film (I keed I keed). We have used it to shoot the audio show as well. It is still going strong after nearly nine years (the camera, not the show).