Before you begin reading this, you have to go here and listen to this music as a soundtrack while you read (just shrink down the window).

Basically THAT bit of music is what sets off the feeling of the whole thing. That cheesy bit of over-the-top music.

Now before my man-card is revoked for reviewing a Broadway musical, understand that Phantom (with all its girly stuff aside) is fun, and so over-the-top that you can’t help but enjoy it.
In this extensive review I am mainly covering the musical, but I will touch on the non-musical adaptations.

Phantom of the Opera was originally a French novel by Gaston Leroux written in 1911. It has been made into several movies, TV productions, a musical, and spin-off book (and soon to be sequel Broadway show).

Let me sum the whole story up VERY QUICKLY:

Deformed man living in opera house falls in love with chick, kills people, finally captures the chick, gets a kiss, and decides it’s too ‘yucky’ and lets her go.

Ok, I might be GREATLY generalizing it but that’s basically the story. I am making the assumption that he thinks it’s ‘yucky’ but it’s pretty obvious. Although he seems to finally realize that he loves her enough to let her go, we all know that women just didn’t live up to his expectations.

Here is a rundown of the most of the well known versions of the movie adaptations:

There are quite a few more versions out there, but those were the most well known. For a complete list go here.

I am going to focus on the Broadway musical, and the Joel Schumacher version. I have now seen both the musical and the movie twice, and feel I have enough entertaining bits of info to make this review.

The reason I am covering the 2004 version of the movie is that Andrew Lloyd Webber wrote it. This is basically the most ‘perfect’ version of the Phantom of the Opera musical (since Webber was able to put in scenes that are not able to go into a stage production). What I plan to do is take you though the story of the musical, and discuss differences between the movie and stage version. I think you will find it quite interesting.
I will cover the cast first since any good production relies on it’s cast. The musical was written by Webber in the early eighties. Webber was married to Sarah Brightman (the opera singer). Basically the heroine was written specifically with Brightman in mind. I don’t know if this is an endearing move or an insult. The character of Christine (the main female role) is a vapid, silly girl (although that is not intended). Here is this young chick who thinks her dead father has sent her an ‘angel of music’ to teach her how to sing. Then she is basically seduced by this deformed peeping tom, and on several occasions, after being told what he really is by sensible people, she still falls for his traps. Anyway, I am not saying anything about Brightman, but she has always come across as a little vapid (in interviews). She is still hot as hell but a little vapid. Anyway, Sarah was the original Christine. The original Phantom was some Broadway singer who is quite good (I am sure I just offended Phantom fans who read that [also known as Phans] so I apologize). In the movie, some unknown singer took the part of Christine (Emmy Rossum). She plays the spacey Christine fairly well (Sarah would be proud). The Phantom in the movie is none other than 300’s Gerrard Butler (yeah, I can see the surprise on your face) and will go into more detail about him later. For now I will say: 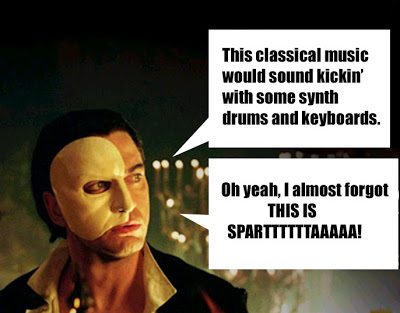 One final thing that I would like to touch on is the music. Phantom was written in the early eighties and it shows. You have this massive orchestral piece with some electronic drums and keyboard work thrown in. That’s another point of the cheesy fun for me.
In the 80’s a music video was made for the Phantom of the Opera song. It stars Brightman and Steve Hartley (a British rock and roll singer of the time). It’s not really representative of the musical. It is just that one song with some elements of the show. It is fantastically bad (in a good 80’s way). Enjoy the strangeness. It is a little more ‘rock’ than the actual song in the musical.
One final note on the music. The lyrics have change quite a bit over the years. If you get on YouTube and look at the different performances over the years, you will notice that the lyrics change a bit. I am guessing that Webber continued to hone the songs into the best version (which you see in the movie).
All in all I think its ok for all you men to watch this movie (or musical) with your wife or girlfriend. It’s man-friendly enough.

4 thoughts on “Review: Phantom of the Opera”