Renegade Anime was the 2nd attempt at a business I have ever made. The first business I had was Game Vault. In 1997 (I think) I started this mail order business. It was really an EBay business but its official title was mail order (at the time the state paperwork had not yet recognized Internet based-businesses.) I sold Anime (Japanese Animation), import games, Japanese toys, and models. The main thrust behind the business was something that Chris later echoed; start a business selling stuff that I myself liked. I was into Anime, models, and such so it was part business and part hobby. As far as the stock went I was able to find a great source for Models from a place called Hobbylink Japan. The price was high, but there were some great products to be had from the land of the rising sun. I obtained some of the import games (for systems like SNES, PS1, and Sega Saturn from various resellers online. Eventually that business sank. Not because of bad market conditions, but mainly from my apathy.

Renegade Anime was the next evolution of Game Vault. In 1999, I got the license and registered the name with the state. You don’t have to have a registered business name, but I thought that I should make that extra effort. All you have to do is go to the courthouse downtown and fill out some paperwork and pay them (fifteen dollars at the time) and you have that name registered for ten years. Back then to get the business license you had to go to one of the state’s business offices and fill out the forms (it was pretty easy). Nowadays all you do is go online and it takes like five minutes! So I had my license and registered name… Renegade Anime was born. To this day I still have some stuff wrapped up in that name (like old business credit cards, bank records, etc) so I have to deal with people who mangle the word Anime even now after it has been absorbed by our culture. My decision to use Renegade Anime as the name of the business is somewhat of a mystery to me (now, years later). I am guessing I wanted something that had Anime in the title because I knew that anyone who was a fan and knows what Anime means, would also know all the other types of products it includes (toys, models). As far as the Renegade part, I assume I was looking for something cool and seeing similar businesses with those names thrown about was my key.

Renegade Anime started out the same way Game Vault had. I did all my business on EBay selling Japanese models, Anime, and toys. Quickly I ditched the games because they were just too high to import and the markup was becoming too narrow. With the mass of games coming out of Japan for all the different systems all you had to do was wait a few months and the most popular games would get an official port to the US. I did however have some success with the business. It also provided a nice little tax shelter. I was also able to buy and fool with stuff I could not afford normally and then sell it so I didn’t have the debt of those items. It was like a quick fix for my “American Materialism”. To say that the business was a hobby more than a means to self sufficiency would be a correct statement. That is until 2003.

After leaving my job of System Administrator rather unceremoniously, I found myself without income and bills piling up. What better way to react than… to spend lots of money! Somehow or another Chris and myself talked ourselves into doing the business thing in a more serious way. Well, actually we started out slowly. I remember the night I threw down 500 dollars on the table and said, “here we go. We have to start a business from this.” We promptly began EBaying in earnest. We started to go to garage sales and buying books, tapes, CDs, and all sorts of miscellaneous items. Renegade Anime was still around its just I hadn’t really done much with it in months. This new venture we had begun was enveloped into the Renegade Anime business name. We started with some success. We had found several good deals at garage sales and made some decent profit. Saturday’s were spent driving around to garage and estate sales. Once we 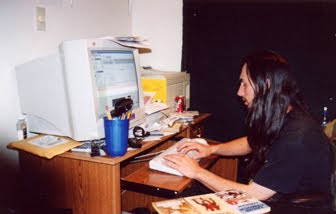 happened upon a Wal-Mart bag of Pokemon cards. The cards themselves were in cruddy condition (heavily played with by kids) so Chris tried to talk the people down in price. The woman snatched the bag from him and stated, “They’re worth more than than!” We enjoyed that experience so much we incorporated it into a sketch a year later. On another occasion we chanced on some model railroad stuff. We made a tidy profit off these (but also had our first missing parcel which took away most of that profit). During these auctions we worked out a sheet of paper that had some basic formula that figured out bills and profits and reinvestment.

In the tomorrow’s article, I will tell you about the move to the DFW Cattlebarns Flea Market and then the big move to our own shop!