Chris and I were doing pretty well with our garage sale finds on EBay, so we decided to move our little business to the Fort Worth Cattle Barns Flea Market. For those of you who don’t know about the Cattle Barns Flea Market let me fill you in… Deep in the heart of Fort Worth, ok, not that deep, you will find the Will Rogers Memorial Center. It’s located just West of downtown between Montgomery and University (off Harley) in the ‘museum district’. It’s a collection of coliseum, show barns, meeting halls, etc. This is where the Fort Worth Stock Show and Rodeo is held but during the rest of the year some dude rents out one of the huge barns. He is the one making the real dough in this venture, not the sellers. Anyway, he rents the barn, and then subdivides the spaces and rents them out to sellers. The spaces run $12.00 per day (at least it was in 2003). The market is only open on Saturday and Sundays. Our thought was that we might be able to hock some of the stuff there (as a supplement to EBay.)

The thing about the flea market is this… people at the flea market are cheap. Really cheap. We would be lucky to clear the rent for the weekend. I must admit however that we had a real good time sitting around, playing this card game called Net Runner and playing various board games we had come across in yard sales. We had lots of fun with Casino Yahtzee.

It seemed to me that the flea market was basically a place for dealers to hang out and buy and sell to each other rather than having people coming in to buy stuff. A few spaces down was ‘the candle man’ who sold his own homemade candles. I seem to remember thinking he was really cheap and crabby. There was the old Vietnamese lady across the way whose double stall was full of garage sale crap that no one ever bought. Then there was Mike (or Mr. Bones as he liked to be called). Mike was a comic book collector. He had a stall with boxes and boxes of comics. Mike had bought someone’s massive collection wholesale and had so many comics he didn’t know what to do with them. We would chat now and again as we all watched the hours tick by. Mike was into video nasties (as they are called in the UK), movies that are considered ‘underground’ because thy have been banned in countries here and there. None of them were banned here in the US but they weren’t in print at the time so they were bought and sold on shady VHS copies. Mike loaned me a couple. Being the gore hound I am, I wasn’t all that impressed. Just look at Dead Alive, can it get any better?

There were many other dealers (some in books, some in coins, some in junk) and we all waited each Saturday and Sunday for the money that never really came. Like I said, I think we all just hung around and wheeled and dealed with each other.

Winter of 2002 rolled on until one fateful day Chris, sitting there in the flea market was browsing the newspaper for retail space. He had been looking at places near his job that had been for rent and he had been talking to me about the possibility of getting a space for the business. He claims up and down that it was my doing, but I think he put the idea in my head in the first place. We started looking (kind of half heatedly) at different locations over the next few weeks. This is how we came to meet the colorful Paul Lyons. Paul was an ordinary Joe Schmo until he took a real estate class and learned: “How you can be rich too.” He quickly got a massive loan and bought a small run down strip mall off Camp Bowie in Fort Worth. Paul began renovating the spaces one at a time pretty much by himself and attempting to lease them out. Chris and I found his property one day and decided to take a look. The space we were interested in was the last unit in the strip mall. It was still run down and had previously been a beauty shop (sometime back in the 70s or 80s). It was affordable and we thought we could do something with it. Paul was more than willing to work with us on getting it up and running, and even cutting a rent deal with us.

Now, when I get a time machine I will of course go back in time and stop myself from renting this location. I would appear out of nowhere to myself and say something like: “Nathan, don’t do it. Take the time to get a real business loan, and then get a real retail space in a good location.” At that point I would have probably disappeared because my past self would have had a heart attack thus wiping my future self from existence. But as they say: “Hindsight is 20/20.” 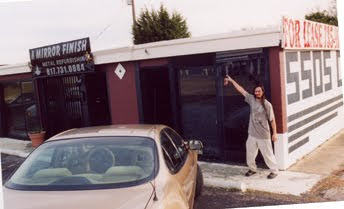 Nevertheless, I got my mom to spring me a four thousand loan (how or why she did this I will never understand) and used the rest of my savings to get us up and going. We signed with Paul (at his office/love pad) paying six months rent in advance. Once the six months was up, our rent would go up like fifty dollars. By then our business would be so sucessful it wouldn’t be a problem… right? Paul also worked on a deal with us in regards to getting the location up and running (since it was all run down). We would help him get the space up and ready to go and we could move in eariler than the lease stated (no cost) and he would credit us some money (which never happend). We quickly agreed and soon we were on our way fixing up the future Renegade Anime.

In part 3 I will discuss the biggest leap of faith I ever made and how I landed flat on my face!