As with most projects, you start out on fire and get a lot done. Getting the dilapidated shop space into shape was no exception. We did more on the first two days than over the next three weeks. We ripped up the tile floor and scraped the old tint off the front window (that sucked). We tore out the restroom and painted the walls. After this initial tour de force things slowed, considerably. January 2003 was nearing a close and things were creeping along. Paul had a guy he knew come in and do the plumbing. This guy was kind of on the down-and-out side. We had purchased some had sanitizer soap for the restroom and he stole it. Now I know I am jumping to conclusions but it was there when the day started, and it was gone after he left. I can only add two and two people.

While preparing on the store space during January, Chris and I bought stock. I had been accumulating models from Hobbylink Japan and collectibles from various sources including Diamond distributors (aka, pay us full retail price and mark it up twice, Inc.) Setting up an account with Diamond (the biggest comic book store distributor in the nation) was the first real clue this was a legit business. Every comic book shop got their stock from Diamond… I’m not sure why though. Their stuff was so expensive you could mark it up very little, so I used Diamond only for their clearance stuff (which was at the right price). I purchased no actual comics from Diamond, mainly collectibles. I purchased the Anime from The Right Stuff wholesale. In the end, we had very little Anime in Renegade Anime. Magic the Gathering ruled the roost. I found a company online that sold Magic the Gathering and all sorts of other cards. We bought a few new boxes of the most current releases of Magic as well as Yu–Gi-Oh. The big purchase came a couple of months before when we bought 100,000 Magic the Gathering cards from a card shop up North called Star City Games. My guess is that they were a huge Magic dealer and had millions of loose Magic cards sitting about that they would eventually auction off (just to clear space). We spent a couple of weeks figuring ways to bring in profit and these cards seemed to do the job pretty well. In buying in such a large quantity we were getting these collectible cards for less than three cents each. There was some real profit potential if you marketed the cards correctly (and had patience). We spent the next couple of weeks sorting and re-sorting all these cards. It’s amazing how you can become intimately knowledgeable about something in such a short span of time. Chris became a little too knowledgeable with Magic: The Gathering and wasted a good deal of the next 8 years on it.

Before we could officially move in we had to get the correct permits for refurbished space. Paul and I went downtown, and sat aro,und for what seemed like hours waiting to get the ball rolling. I paid the fees, and once the city inspected the space, we could get the electricity turned on and move in.

We continued to sell on EBay while the shop was being finished up. In all I believe we got to move in just a few days before our actual lease began. I went out and bought a cash register and a neon OPEN sign (that was NetRunner colored as luck would have it), and some shelving from Home Depot. I also pieced together an old computer I had and printed up a bunch of funny signs to place here and there (with store hours, etc). I set up a merchant account so we could take credit and debit cards, and finally we bought a display case from someone through the newspaper. I brought a small fridge, microwave, and various other things to make it comfortable for us.

Finally, after much work, we opened to the public. The public did not actually see the shop for some time (since walk-in business was abysmal) but we did open. What a feeling to have a shop of your own! If you have never owned your own business I encourage you to do so! There is nothing quite like being in complete control. 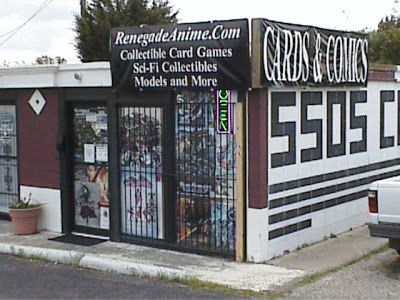 We quickly discovered that Renegade Anime was in a bad location, a really bad location. It’s true we were off Camp Bowie, but the location was too difficult to easily get to. The actual building was on Rosedale Street so getting to it means getting in the turn lane far before you could even see the shop, so impulse customers were a no go. You really had to work to get there. We quickly began EBaying in earnest. This was the only real way to pay the bills. I did pay off the first six month’s rent up front so it was a matter of working on all the other miscellaneous bills. We sold the Magic cards and books (we had obtained from garage sales previously) like there was no tomorrow.

Coming to the shop to work meant spending the majority of the day building Magic: The Gathering auctions. That is, we would take all those sorted Magic cards and make stacks of one hundred different cards (throwing in some rare and uncommon cards). I would be there building fifty stacks of auctions at the same time while listening to Chris’ Charlatans UK album. We hardly ever had customers come in, so I was never worried about being interrupted.

Its not that I didn’t try to get customers, I advertised in the TCC paper, in the local school paper, on the web, and through our auctions. I even went as far as standing on the corner of the busy Camp Bowie and Horne street intersection with a sign. As far as the EBay thing went we did pretty well. On a couple of weeks I think we almost broke a thousand each week.

In my next post, discover the varied and interesting tenants Renegade Anime shared their space with.