Paul’s shopping center (of which our business Renegade Anime was at the end of) comprised a motley mix of businesses from (our) comics to spa treatments. Maybe that was one of the reasons he had trouble keeping business alive there. Perhaps if he catered to just offices and not retail and trade stuff he might have had better luck. I do know that to this day only one business that was there when we were there is still around. Ye Old Lamplighter. This crabby old dude who restores antique lamps and such. Last year he sold his business to Paul and retired.

During our heyday a guy named Eric had a start up business next to us. His business was called ‘A Mirror Finish’. He polished metals and such. His business had a nice symbiosis with Ye Old 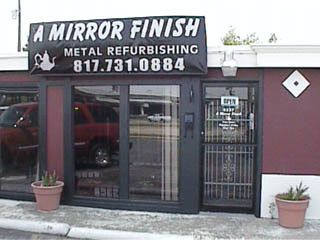 Lamplighter since the two trades were very similar. We became friends with Eric and I would often just pop in to see what was up with him. It gave me something to do on those long lonesome days. I built him a website and posted it to help him bring in business but it failed to do any good. We liked Eric because we could have had problems if our shop was near someone like the ‘Old Lamplighter’. Eric wouldn’t mind the loud music and screaming (occasionally). Sometime in early 2004 Eric left his shop and moved his business to his garage. After he left a lady moved in and had some design studio for clothing. Apparently she was pretty good at what she did. She didn’t last long either.

Next to that the space sat empty for quite some time. Early in 2004 ‘The DJ Booth’ opened. The DJ Booth was a place for these stoned, drunk dudes like to hang out. Not really (I think). The Fabulous Baker Boys ran the ‘booth’. I think the white Baker boy was kind of a Fred Durst rip off and the black Baker boy was the business side of the duo. I really liked Sidney. They ran their DJ business out of their new shop, and had planned to open it to the public to sell records. I never saw any of that really. I did see some dudes hanging out there from time to time but that’s about it. I believe at some point the Old Lamplighter complained about the loud music they blasted from their ‘shop’. I think they went out of business sometime in the middle of 2004.

The one business that was there, but was never there, was next to the DJ guys. It was some Tax Service. I think I did see it up and running once in early 2003. The entire time I was renting there was a tax service sign at that place, and stuff inside, but I never saw anyone.

Ye Old Lamplighter was next. I did stop in a couple of times to chat with him, and peek around that rat hole of cool electrical stuff. He also made really detailed military models (with little light and everything). Apparently he got quite a lot of business from rich clientele. There would always be some old silver haired dude lugging a huge chandelier out of the back of his Escalade for the lamplighter to fix. He did have an employee or two working for him from time to time. I remember that there was some stripper chick who worked covering for him (or something). On a side note the next shop was storage for some Chili/Pepper newsletter or something like that. I only ever saw someone there once.

Ah, the Healing Touch. This ‘business of dubious trade’ was the subject of many discussions over my time at the centre. We never figured out if it was a bone shop or not. All we ever saw go in there were men. We would see the couple of women that worked there from time to time leaving work and such but we never quite knew for sure. It closed down in 2004. We (still to this day) have a running joke about the Healing Touch and other businesses (and songs) with the word ‘touch’ (in a dubious, funny way).

The next few spaces were empty and still unrennovated. There was a music lesson studio and a space that Paul used as his office further down. That space was later turned into a spa that quickly bombed. The Spa Haus was run by this rather flaming gay guy and when it opened they pulled out all the stops and had this big event with runway models and hor dourves. Tess’ Tea Time was next to that. It was a dress up party place for kids to have birthdays and such. There was a Church next to that at the end of the building.

If you drive by there now you will see an insurance company where the comic shop was. Before it was an insurance place, it was some sort of business that sold blinds and wall coverings. There is a nursery and a salon where the church was. Strangely and funnily enough the salon is called the Final Touch (har har har).

In the next blog I will take you though some anecdotes of the goings on in the comic shop.