Isn’t new technology great? I remember buying a Creative Labs DVD bundle for $600.00 at Best Buy many many years ago. It came with several games like Loom and Secret of Monkey Island. That was some hot crap back then. It was a single speed reader and wow, what an awesome piece of high-tech equipment! It was a new technology but it didn’t have many bugs and I never had to update the firmware on it. Jump to 2009 when I got my 2nd generation Blu-Ray player… The load times on movies is OUTRAGEOUS! I will literally load a Blu-Ray movie (it’s a Panasonic player by the way) and will go do something else for about two to three minutes. Now that doesn’t sound like much but when you are just sitting there staring at a blank screen it seems like forever. So I put in the 2009 Universal Wolfman disc in and finally get to the menu and select ‘start movie’. I am then sent to an infinite loop of the ‘behind the menu’ video. The player won’t respond to any commands it just keeps looping that video. I had to hook the player up to the interweb and update the firmware. Come on!!!

I won’t hold it against the movie.

Universal is the license holder of the biggest of monster legacies. Frankenstein, the mummy, the wolfman, the invisible man, creature from the black lagoon, etc… They are pretty good about using those classic monsters (ala merchandising and such) and have attached them with their studio’s name very effectively. The studio has done what many companies try and fail to do and that is to make two names synonymous (Universal and ‘ fill in the bank with a monster ‘) it creates a brand that has a mystique all it’s own. Anyway every few years we get a remake like The Mummy or in this case The Wolfman.

The Wolfman seems to be closer remake than The Mummy. They really took The Mummy story and made it something very different. The Wolfman has stuck close(er) with the original. You basically know the story by default. Man is bitten by werewolf, man becomes warewolf. The movie was panned pretty hard because that’s what critics do. They got word that the movie has some rewrites and re shoots and the critics smelled blood in the water. It’s not that bad. It is what it is; an updated story of the Wolfman. Critics hated Del Toro’s American accent (I found it entertaining), they didn’t like Hopkin’s recitation of his lines (I thought it was a little odd but that was his character), and they didn’t like the ‘oppressive mood’. I think these were technical issues that these critics latched onto since they never commented on the actual story. It is an oppressive mood because it was oppressive situation upon oppressive situation. This wasn’t a happy funtime movie, it was about death and horror.

There was a lot more blood in it than I would have expected. I did watch the unrated version but I was surprised that there was much blood at all. I figured Universal would want to keep it somewhat clean but they didn’t. They let Joe Johnston go for the throat. The effects were very good and the transformation scenes were actually somewhat fresher than I was expecting. We have seen all these movies where people turn into warewolfs so it’s old hat, but a few little tweaks here and there made the scenes fun to watch. The look of the warewolf was pretty classic (basically a mostly clothed warewolf dude). He looked rather ‘hip’ and ‘with it’.

It was fun to watch. It fits nicely into the whole mystique I talked about earlier and is a welcome addition to the Universal family. As always the Blu-Ray image is excellent and it almost makes up for the crappy load times and issues I had to deal with. Benicio Del Toro’s ugly mush is in excellent detail. 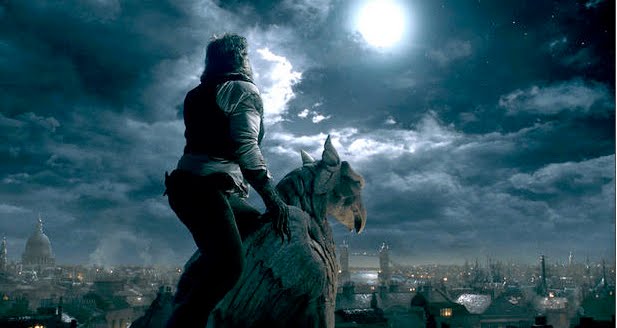