by Nathan Stout (of AccordingToWhim.com)
Coming for 2011, Coupon the Movie….
Just because something exists doesn’t mean it HAS to have a movie made about it. As you should already know Pirates of the Caribbean is a dark ride at the Walt Disney parks. Someone got the terrific idea of making a movie about it.
Here is an interesting tid bit of information: Pirates the ride inspired Lucasarts‘ The Secret of Monkey Island.
A game, sure. A movie… well maybe not so much.
One movie, maybe… three (and soon to be four) ehhhhh… nah.
Pirates of the Caribbean: Curse of the Black Pearl is a story about Johnny Depp doing his Keith Richards impersonation while trying to get his ship back from his traitorous undead crew. He wins in the end. Wooo hooo. 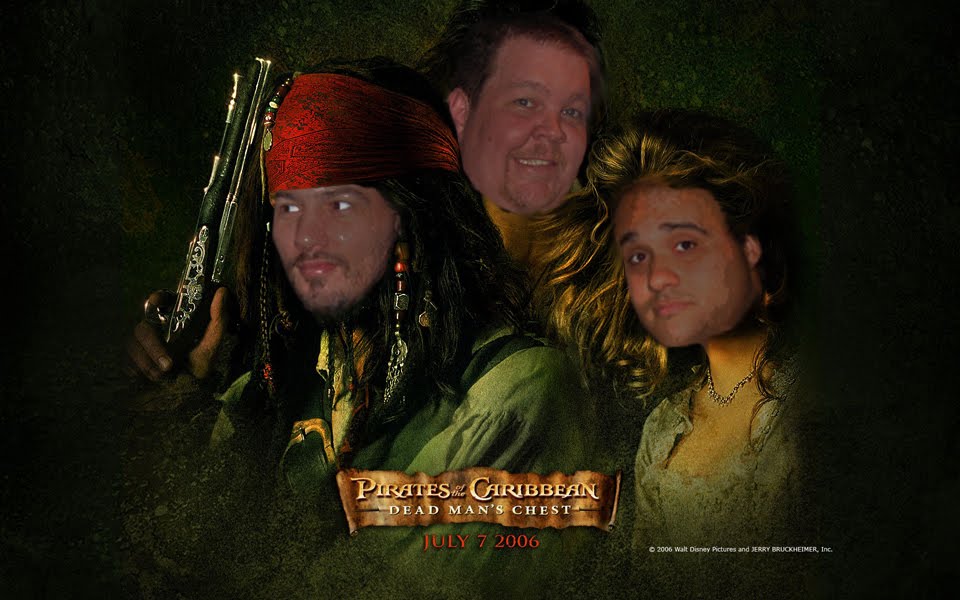 Pirates reads like a room full of Hollywood big shots trying to spend as much money as possible in an attempt to top every other action movie they ever did.

Sure the effects are good. Johnny Depp and Geoffrey Rush are very entertaining. Kera Knightly (aka the DNA experiment from Winona Rider) is hot and WHO doesn’t like zombie pirates? The movie is just good enough to enjoy. Thin on content but enjoyable enough.
Pirates of the Caribbean 2: Dead Man’s Chest is the story of Davy Jones and Johnny Depp. Davy Jones is played by Bill Nighy. Between him and Depp’s performance this boat doesn’t totally sink in to the depths of the ocean. The special effects help but the movie suffers from Empire Strikes Back, Matrix 2, and Back to the Future 2 syndrome.
Mr. Big Bucks Writer/Producer #1: “OMG we need to plan out the next 2 movies, our first one was a big hit!”
Mr. Big Bucks Writer/Producer #2: “Ok, I’ve written in all this stuff that will link parts 2 and 3.
So what you get is a movie with a lot of ‘prep’ work for the audience to assimilate. That sort of thing really sticks out when your first move didn’t have any of that.
One big HUGE flaw in the whole Pirates trilogy plot line: WHY or why didn’t they keep the Aztec gold handy when going off on any dangerous missions? If it basically made you immortal why not use that to your advantage???
Ok, sorry about that. Anyway part 2 hastily introduces new characters and hither unto unknown situations that our characters were dealing with (without ever mentioning them in the first movie). The whole plot line around these last two movies revolves around everyone double crossing each other. The double crossing get too confusing and the audience is left just trusting the editors and writers to know what the hell was going on. Johnny Depp dies and everyone voews to go get him from ‘Davy Jones’ Locker’.
Pirates of the Caribbean: At World’s End is filler for the final confrontation between the characters and Davy Jones. You could have literally done without the whole movie if you would have made part 2 a little longer. Some of the scenes scream ‘filler’ like Johnny in Davy Jones’ Locker and Johnny in the Flying Dutchman’s brig, and the crew visiting Singapore… basically three quarters of the movie. One really strange piece of filler was just after their ship goes over the edge of the world. There is like a minute of pure black and the soundtrack to the actual ride playing. It is really wierd.
I can only hope Pirates of the Caribbean: On Stranger Tides will have something to tell besides the ‘thanks for your cash’ message the last two did. There was a brief tidbit at the end of the last move where Johnny is looking at a map to the Fountain of Youth. I guess we will find out next year.
One final note about Johnny’s performance. Although he was doing his Keith Richards impersonation, I could see a LOT of Chris McGinty in there. It was sooooo funny.