Iron Man is cool. He is really cool. At least, that’s what I’m supposed to believe per the marketing people, right?

I FINALLY got around to watching “Iron Man 2” and I have a couple of pearls of wisdom to say about it.

I have this problem (no, not with bladder control as you may have heard) but with animated sequences. There is this point when my brain knows that what it is watching isn’t real. It’s very close to looking real, but something just isn’t right, so my brain starts getting all muddled. I’m sure you have experienced this sensation too. Have you ever been looking at something (usually on TV or the movies) and the camera angle is all funky, so your brain momentarily gets disoriented… it’s like that. Have you ever walked through one of those spinning tunnels in a haunted house? You KNOW you are walking perfectly upright on a flat surface, but your eyes are sending confusing images, and your body makes you ‘think’ the room is turning… it’s like that.

Well, when I watch movies where there is a lot of CGI going on, sometimes my mind gets that strange feeling. My first experience with this was while I was watching “Star Wars: Episode 1,” during the Gungan battle scene. The scene in “Iron Man 2,” where Rhodes and Stark are kicking each other’s butt, did this to me as well.

“Iron Man 2” picks up where “Iron Man” left off (basically). Tony Stark is very self centered (maybe a little over the top) and setting himself up for the emotional fall and rise (it’s a very obvious setup). Zaphod Beeblebrox (Sam Rockwell) stars as the inept weapons contractor who helps the ‘bad guy’ Ivan Vanko (a very scary looking Mickey Rourke) take down Stark. Tony falls from grace, finds new hope, and wins in the end. Big Surprise. One more word on the cast. Garry Shandling plays the mean Senator Stern, and it looks like he just walked out of his plastic surgeon’s office… yikes! Oh yeah, and of course Stan Lee makes an appearance as ‘Larry King’.

A lot of this movie is contrived, and there are a lot of WTF moments, but without those moments the movie would be over in five minutes. Want me to list some more of the obvious ones???

1.) Vanko is rammed against a concrete wall by a car SEVERAL times… no one survives that.. not even once.
2.) Rhodes’ ‘War Machine’ suit is taken over by Vanko. Shield Agent Natalie Rushman gets into Vanko’s lair, and reboots the War Machine suit… why didn’t she just disable all the drones attacking Stark and terrorizing the citizens while she was there? HELLOOOO?????
3.) Rhodes and Stark shoot their hand laser beams at each other to create an explosion to kill Vanko, but Vanko wasn’t wearing face protection… why didn’t either one of them just shoot their beam into Vanko’s face and be done with it?

Anyway, this movie is what it is… a big budget explosion-o-rama with cool robot suits. It’s fun to watch and Tony’s crazy talk entertains the masses. If you saw the first and liked it, you will like this one.

One really neat aspect of this movie is the tying in of the whole “Avengers” plot line. If you remember, the first movie had Samuel Jackson (as Nick Fury) show up at the end to ask Stark to join the group. You might also remember that at the end of the Hulk reboot, Tony Stark shows up to talk to Bruce Banner about joining. The Avengers are featured more prominently in “Iron Man 2,” and if we wait until after the credits, we get another “Avengers” sneak peek when they reveal they have ‘found him’. The camera zooms out and we see Thor’s hammer. “Thor” will be released sometime this year. Of course, when you have such a big setup, and Hollywood being what it is, I am sure it will all fall apart and there won’t be an “Avengers” movie. 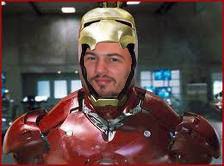