By Nathan Stout (of AccordingToWhim.com)
‘Every 15 Minutes’ is a anti-drinking and driving program aimed at high school kids. It was based around the statistic that a person dies every 15 minutes in an alcohol related auto accident. This isn’t necessarily true. In a study done by the National Highway Traffic Safety Administration in 2008 it shows than it happens every 45 minutes. Oh well, it still sends a message either way.
Several local agencies in an area (police, fire, hospital, church, school in Decatur Texas’ case) got together to put on this program. I was invited in as part of the filming/editing crew for the event which took place in Decatur on Monday and Tuesday May 9th and 10th.
The program consists of two days of activities:
On the first day a wreck is staged at the school and the student body is brought out to witness the aftermath of a group of teens who were drinking and driving. At least one car that was in an actual drunk driving wreck is brought on campus and the kids are put inside. Once the students are brought out a 911 call is made and the fire department, police, ambulances show up and treat the scene as a real accident. Usually the majority of the passengers die and the drunk driver is the only survivor and he is hauled off to jail. This is all filmed.
Also during the day a ‘grim reaper’ walks around the school taking someone out of class every 15 minutes. That person then joins the growing procession. Those students then stay the night at a local church or hotel and listen to a bunch of talks about the whole drinking/driving thing.
On the second day an assembly happens where a video is shown of the previous day’s events along with special speakers who talk about anything from the effects of drinking and driving on people’s lives to victim’s accounts and such. The group of kids who stayed the night at the hotel or church then read out letters they wrote to their parents saying goodbye and all that. It’s basically an emotional attack on the hardened kids getting them to think twice about doing it.
As my work’s participation in the program (the hospital) we were to film and then make the video to show on the second day as well some organization stuff. The task was given to a guy who works in the gym who films the school’s sporting events and then he asked me and the marketing guy to assist. It was going to be necessary to have multiple cameras since there was a lot of stuff happening at once.
·         I was to use my jib crane at the wreck to get general coverage.
·         The marketing guy was to cover close ups of the action as the fire department came in and then follow them to the hospital’s ER and catch the action there.
·         The gym guy was to follow the drunk driver to the hospital then to the jail for his ‘booking’.
The sheriff’s office hauled in two cars and put them in a wreck type position. The kids involved got all made up to look bloody and such and got into the cars. They brought the kids out of the school and then the call was made to 911. The police, fire, and ambulances showed up as well as helicopter to take one of the ‘victims’ to the hospital. During all this a man dressed as a grim reaper walked amongst the scene as if waiting for the kids to die. In the scenario all but one of the kids died while the student body looked on. 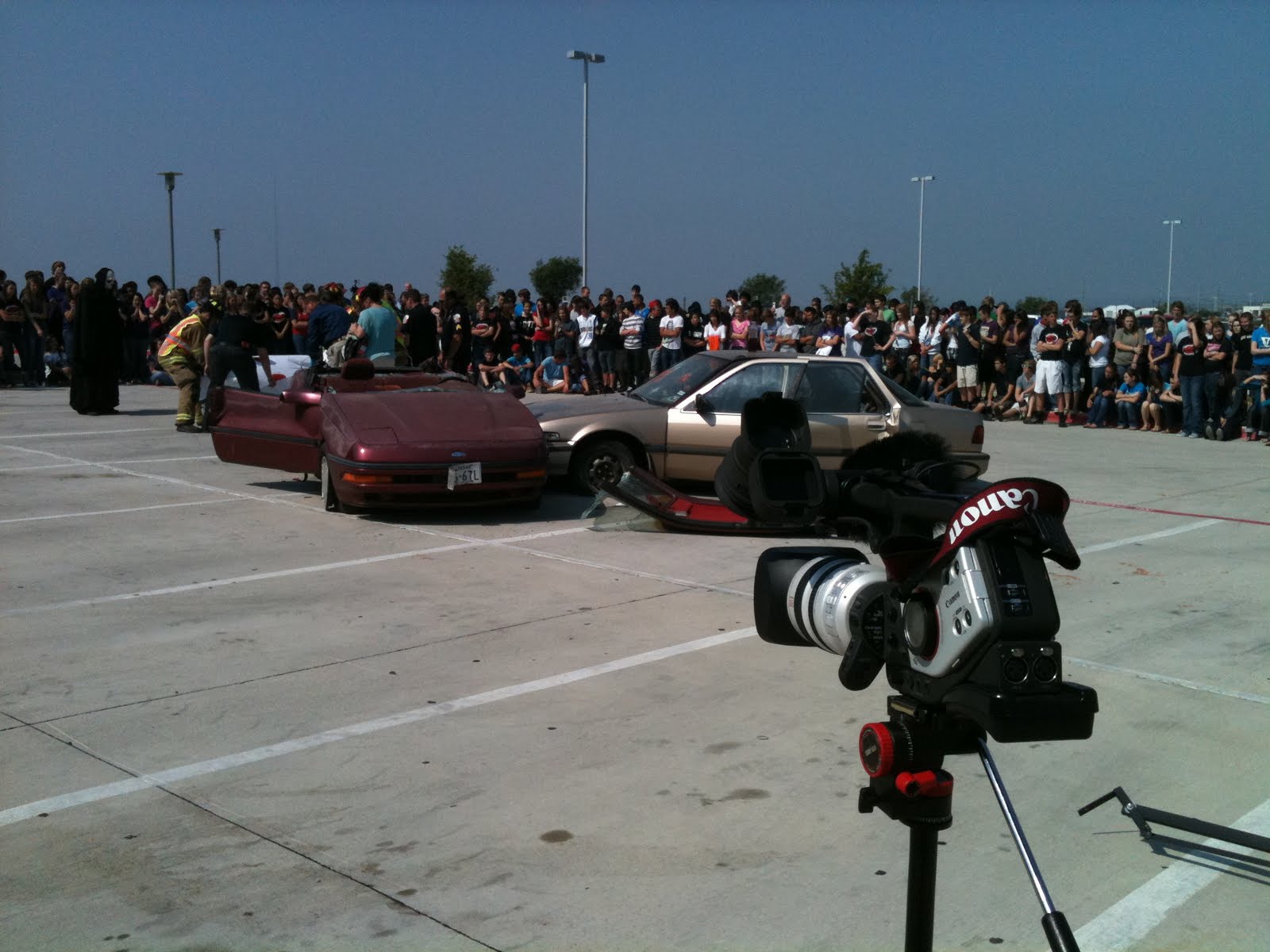 Once the action was over and the marketing and gym guys were off to the hospital I closed up shop and headed back to encode my footage and put it where the marketing guy could get at it for editing. It had to be all edited and ready to go for the presentation the next morning.
I don’t really know if something like this will change any of those teenager’s minds about drinking but I do know something like this costs a lot of money (when you consider the time all these people put into it). I remember having something similar to this when I was in high school but it was not played out like this. It was simply some videos of wreck scenes and kids that died. I also remember it was right before lunch so it didn’t sit well (on the stomach).

Here is the video of Decatur’s ‘Every 15 Minutes’