I’m bringing you into the weekend with this fantastic blog… enjoy!

Hi all! This blog post is not to be confused with my previous post back in March called ‘NetRunner: The Collectible Card Game‘. This blog describes the game itself in the most basic of terms whereas that previous blog post talked about the value of the cards and their rarity.

This blog is my attempt to have a quick article I can give to potential NetRunner players when I want to give them a bird’s eye view of the game without scaring them away.

NetRunner was published in 1996 by Wizards of the Coast. The company that produced (and still produces) Magic The Gathering (as well as a host of other card and board games). NetRunner was released as a base set and some expansion sets:

NetRunner is set in the not too distant future where corporations control everything and hackers make a living breaking in and stealing the corporation’s secrets (called Agenda). The overall theme is based around the internet, computers, viruses, and similar minutia.

The players either use a pre-built deck or they can build a deck of their own with the cards in the set. Once the game gets going the corp tries to defend itself while the runner tries to break through the corp’s defenses and steal certain cards (called Agenda). The goal of the corp is to ‘score’ 7 Agenda points and the goal of the runner is to ‘steal’ 7 Agenda points. There are a couple more ways a player can win or lose the game such as:

The above list with it’s losing condition don’t happen nearly as much as the scoring or theft of those Agenda points I talked about earlier.

The game play runs like this:
Corporation:
The corp takes a turn and has 4 actions. They can place cards down that are called ‘ice’ which are programs that deter the runner from accessing the corp’s cards. These pieces of ice can block the corp’s draw deck, their discard pile, and other cards that the corp can put on down. One of those types of cards are the Agenda I talked about. Agenda can only be scored by putting them down and taking actions to put ‘money’ on the cards. Since this usually requires more than one turn to do the cards need to be defended by the ice so that the runner (during their turn) can’t access those cards and steal them. Other things the corp can do with their 4 actions during their turn is take an action to gain money or drawing cards. Money in NetRunner is called ‘bits’. There is a lot more to the game than this but it gives you the very basics of the game mechanic.
Runner:

The runner takes a turn after the corp’s turn and also has 4 actions. The runner can spend actions doing things like gaining money, drawing cards, putting cards into play, and accessing the corp’s cards. This access of cards is called ‘running’. The runner can access any location where the corp has cards. It’s not as easy as that though… if there are ice infront of those cards the runner has to encounter them. Each ice is different and they can do many things to the runner such as stop them from go any further this action, make the runner discard cards they put into play, cause ‘damage’ to the runner by making them throw away cards from their hand and many other negative effects. 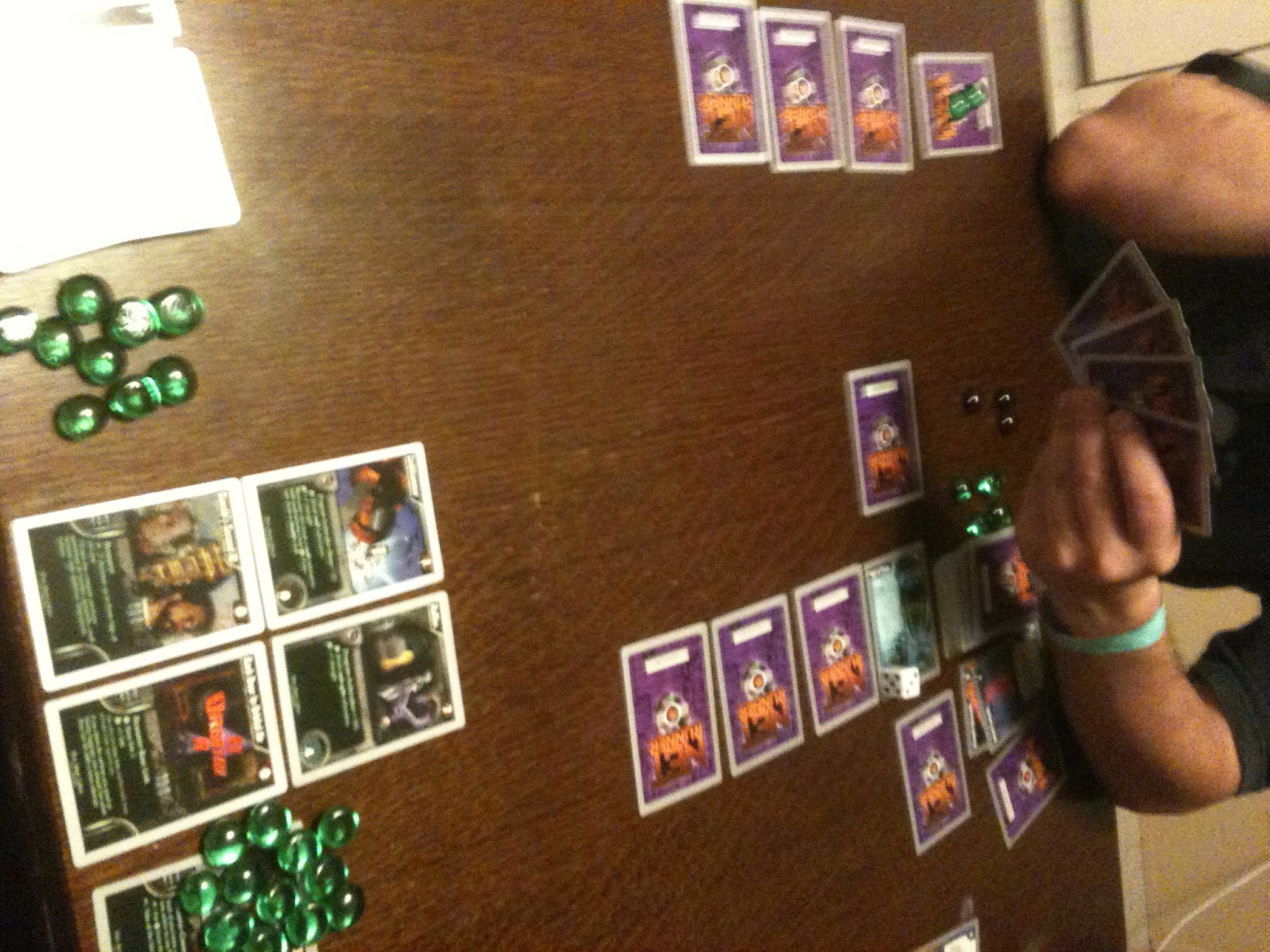 The Corporation is at top and the Runner is at bottom of photo.﻿ Note that the Corp’s sideways cards are ice (most of which have not been revealed yet) that are protecting his cards.
This is just about as high an introduction as I could come up with. I hope it gives you a general idea on how the game works. It is very engaging and nicely balanced (that can’t be said of many card games).

1 thought on “NetRunner: The Collectible Card Game – A beginner’s guide”