by Sean McGinty (Guest Writer for According To Whim .com)

Last Thursday I boarded a plane, running on little sleep, and due to my own oversight next to no food. The destination was Seattle Washington, the reason, a combination of catching up with friends and work. In this case, work would consist of eleven hours sitting at a table in Artist’s Alley at the 2nd Annual Jet City Comic Show. It would be a great day, a day surrounded by comics, costumed fans, and creators both professional and amateur alike. The thing was, sitting in my seat waiting for the plane to taxi into take-off position I began to wonder if this trip was just a big waste of money. “No,” I had to tell myself, “we were going to make this weekend worth the time, effort, and money we had already put into it.” Yes, “we.”

You see, back in 2009, I had stopped at the convenience store to pick something up. I don’t believe it was my usual trip to the store, more an extra stop due to my schedule that week. Darrel was working, a friend that I had spent the last couple of years talking with whenever I went up there. He knew that I was your basic comic book and animation geek and a writer who was still working on a nearly six-hundred page novel. That day Darrel posed a simple question to me: “Was I interested in writing comic books?” Darrel went on to tell me about his plans, a childhood dream that he and his friend George had always been working towards. They wanted to create and publish their own comics.

A couple of days later, I went over to Darrel’s house with samples of my writing in hand and a notebook with a few basic story ideas scribbled at the front. We talked for a few hours about the titles that Darrel was interested in releasing and about the format that was needed for scripting out a comic book. The format really wasn’t that much different from writing an animation script, something that I was already familiar with, and the story was a science fiction based action adventure. This too was something I was comfortable writing. There was no hurry at the time, George was still deployed overseas but I know Darrel wanted to be ready for when he got back. I honestly don’t remember if it was 2009 or if it was early the next year that Darrel opened up Cosmic Bard Press.

Almost two years later, we finally released our fourth issue. We had been hoping for twelve by this point in time and it was clear we were falling short of our own goals. We were all blaming this on our lack of artists and colorists. In truth, our real issue had little to do with our lack of manpower, though that lack was the basic byproduct of our real problem. It was our lack of connections within the comic book community and a lack of notoriety with those who we were trying to sell to. The majority of our sales had been to friends and family with the occasional sell to an outsider. With no presence in stores, no funds by which to advertise, or to try and get our products sold through a major distributer such as Diamond we were looking at nothing changing for us, at least not in the near future.

Darrel, however, had brought an idea to George and me. I had experienced the same nagging doubt at the time about the wisdom of this idea as I had as I sat on the plane ready to begin my trip. I’m sure the others worried about this as well, just as I’m sure they had seen the same issues with our lacking success as I. Darrel invested the funds we had available in getting us a table within artist alley at this year’s upcoming Jet City Comic Show. It would be our chance to put our name out there in a setting beyond the internet. We would also use the convention as an opportunity to meet other creators with hopes of meeting someone who was already working within the industry we were trying to break into. 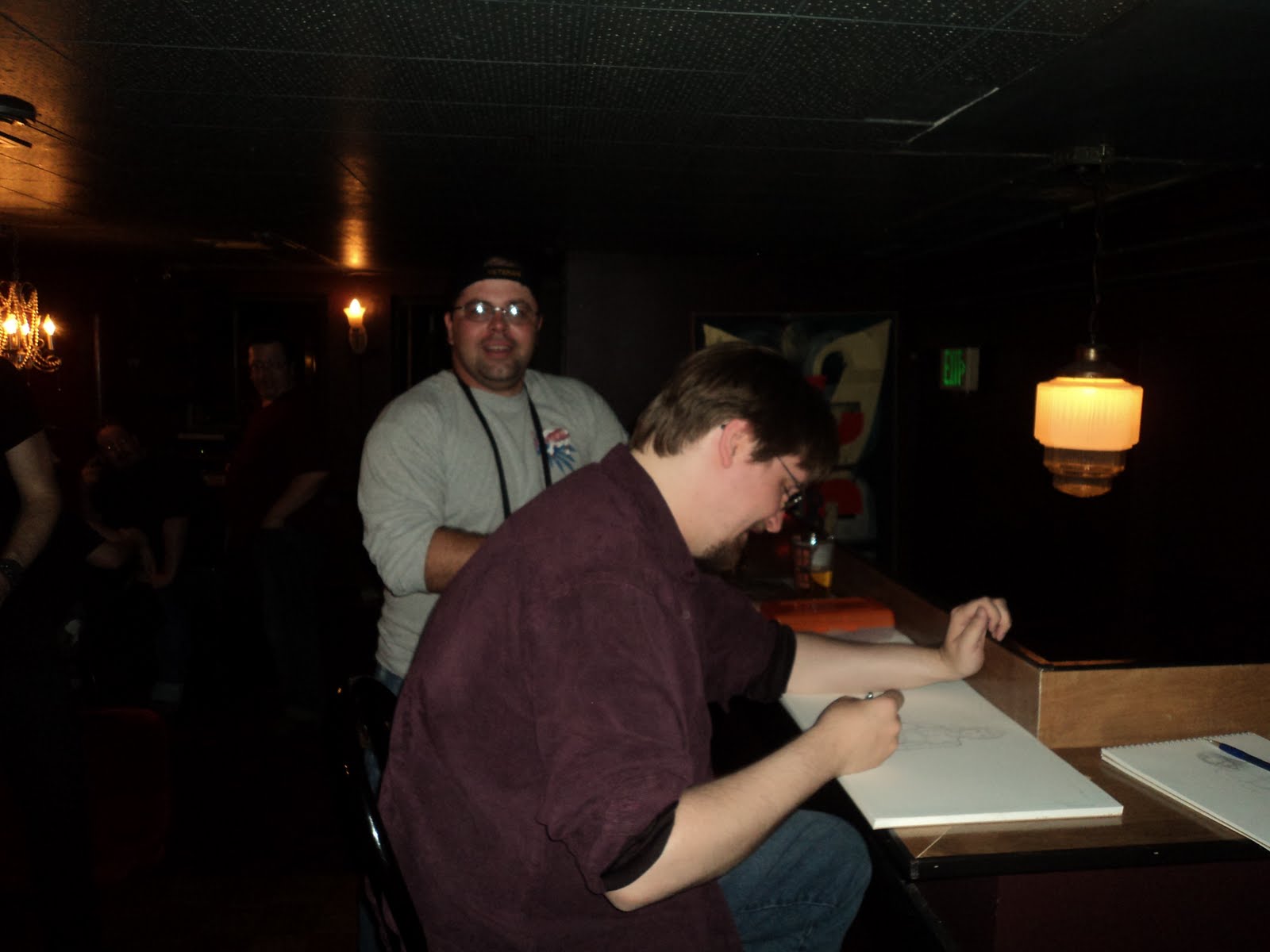 I for one knew that this idea, even with my own nagging doubts about it, could actually work. After all, had I not just a few months earlier watched an interview with Christie Marx? Hadn’t she gone from a fan, hanging out at conventions, to writing scripts for television animation? If she could manage this thirty years ago when we all believed that girls did not read comic books that were not Marvel’s adaptation of Barbie, then surely we with so much drive could do the same thing.

I left Dallas just a little late but arrived in Seattle right on time. George and Darrel met me at the airport which for me was the real beginning of the weekend, because after all standing in line at an airport security checkpoint is no place to start a story of this nature. From this point forward the trip could be divided into three major spans of time. To begin with were the events that proceeded Friday night.