by Sean McGinty (Guest Writer for According To Whim .com)

I’ll focus on the events surrounding the convention, mostly because many of you could care less about our discussions on music or the Duran Duran concert that was taking place in Seattle that first night. Truthfully, being able to attend that would have made for an absolutely amazing weekend, but unfortunately, it was not meant to be. Instead, we started out that day by going to pick up the print order.

Most of you who have ever had to prepare for a function in which you were not simply a visitor or had to pitch something, be it an idea or product, know exactly what to expect of those last few hours. As of a few days before me boarding the plane we still had not received our order of comics. The print order we were on our way to pick up might very well have been the only goodies we would have to sell at the table if the comics did not arrive. Somehow, I had expected what we walked into at the printers. It would be par for the course in my mind. We would not have our first show go off without a hitch. Yes, you guessed it, something was wrong with the posters. Everything else had come out just fine. We left there and made immediately for Darrel’s place to get another copy of the digital file for the posters and even once we got back to the printers it looked as though we might not get them. I’ll say it now however. Thank you to the folks at that Fed Ex/Kinko’s. You were patient with us and did not give up until the fix was found. Finally, the colors were coming out right. Now if only the comics would arrive.

Back to Darrel’s again for some much needed food and to gather the last few things we might need for the convention. We made our plans for the next two days and before long the night was over. Friday started out with good news and seemed to get better from that point on. The comics arrived and the second trip to the printers, to have some flyers done that we had not had prepped for the day before, went just fine.

Friday night would take us to downtown Seattle for the Drink N’Draw, an event hosted once a month by the same group responsible for the Jet City Show. It would be our chance to meet the local Seattle comic groups and with any luck some of the professionals who were attending the convention. We managed both and took in some entertainment as well. So far the start of the convention activities had been going well for us. 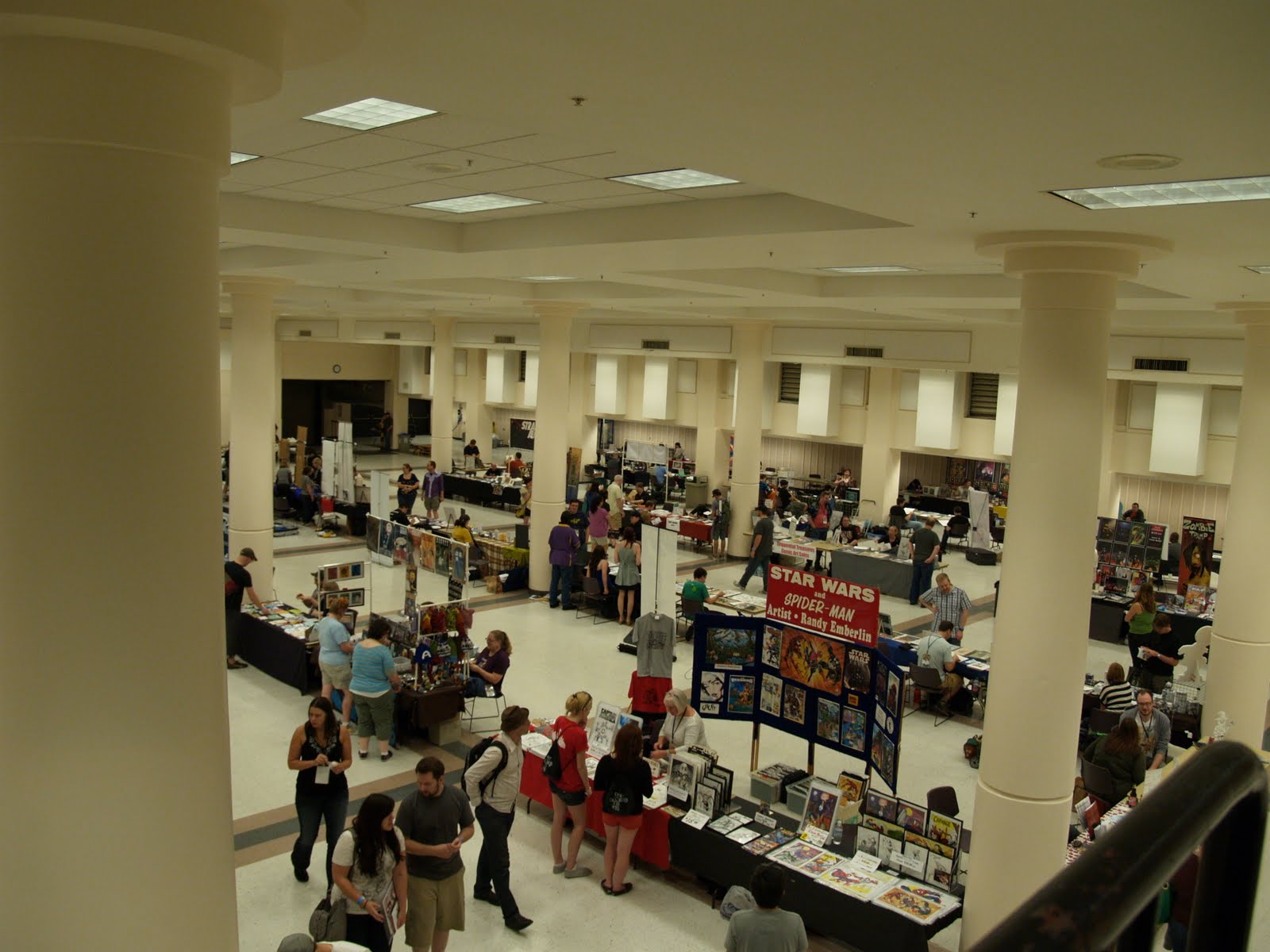 Saturday started early with me only managing five hours of sleep. The ride into Seattle was smooth and set up of our table went quickly. Jet City, a convention billed by its promoters as a quality one-day show, was about to begin. Throughout the day, convention goers would have a chance to shop the dealer’s area, visit exhibitors, and the artist’s alley. The convention had also arranged for a number of panels in the afternoon including a talk and question and answer session with special guest William Katt of Greatest American Hero fame. They had also set up for gaming, in this case a HeroClix tournament, throughout the day. 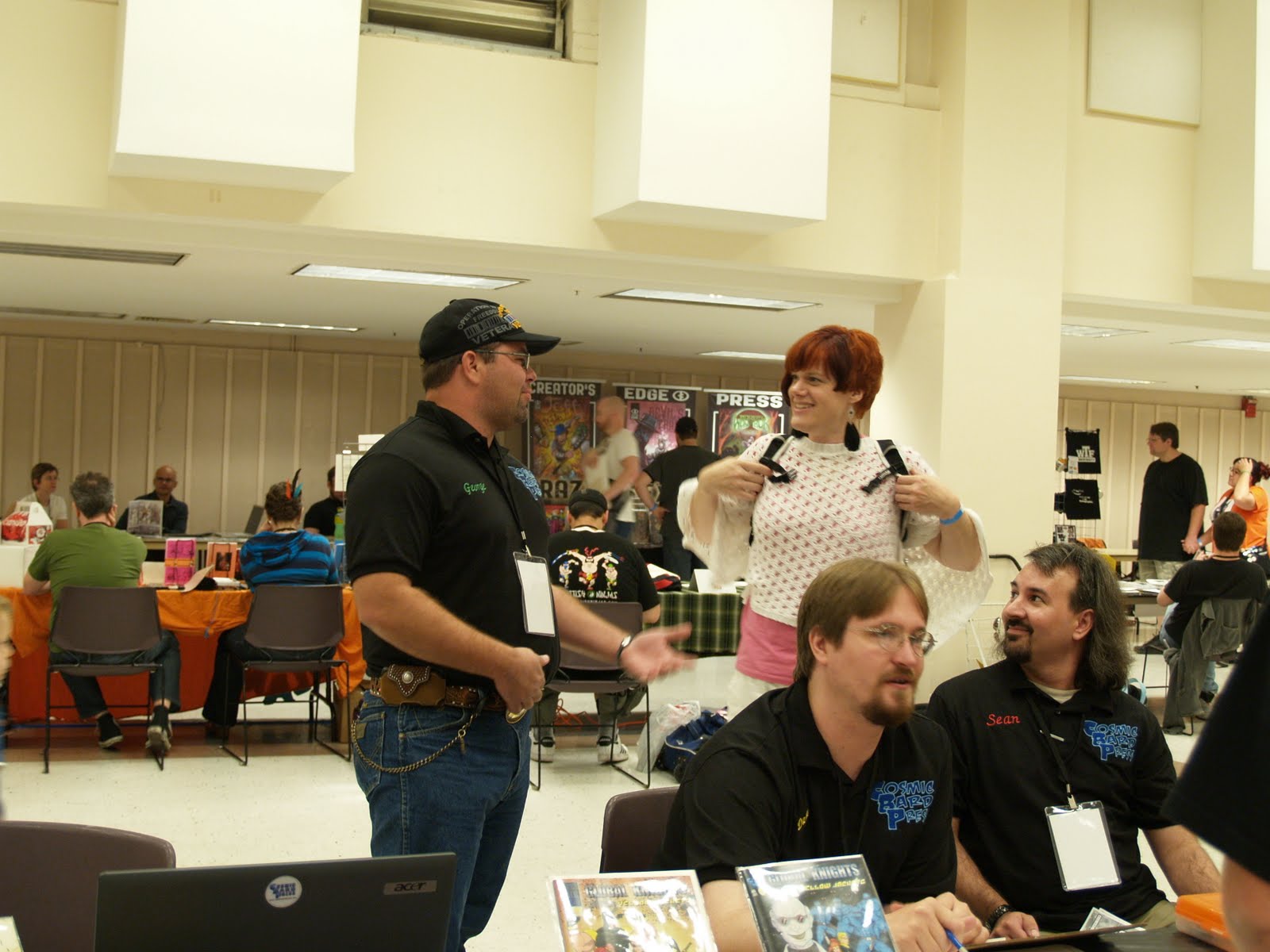 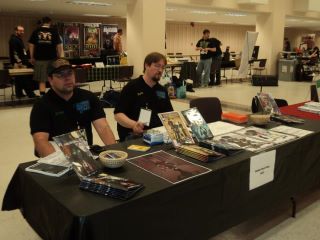 Because we were working the convention, we knew we would not have time for some of these functions. Instead, George and I spent the morning talking with the artists and dealers at the show and saying hello to those we had talked to the night before. It was probably to our advantage that we had been placed near one of the featured guests, a young and talented lady by the name of Emi Lenox who has had a few titles published through Image Comics. I think it helped with getting people to look at our product and she was able to give us a few pointers on handling con life. Emi’s comics are certainly worth the look if anyone is interested. 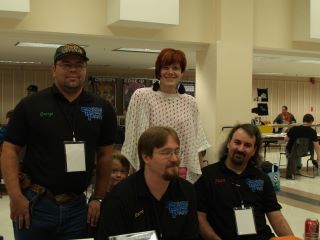 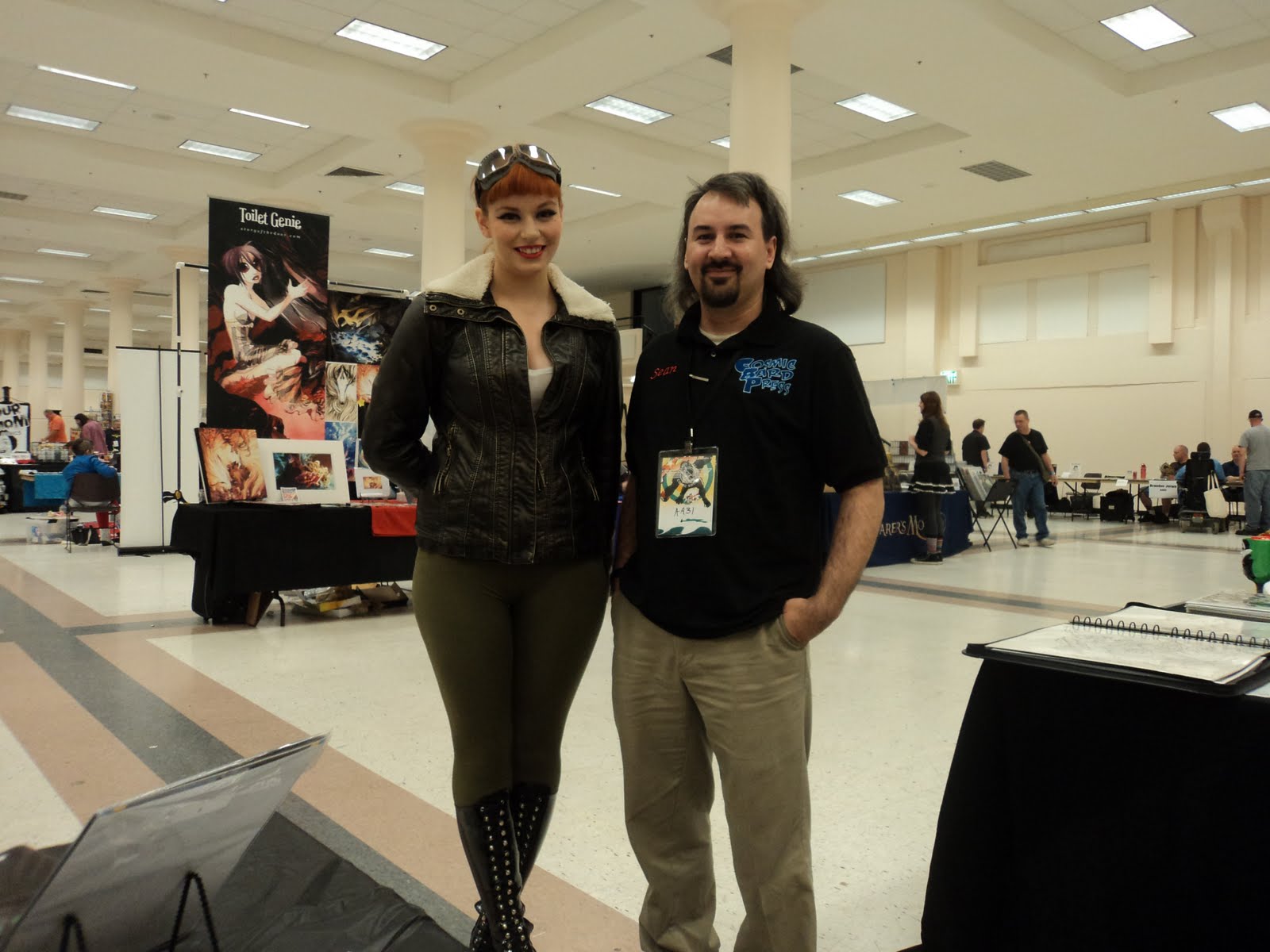 The afternoon, as I said, had been set aside for panels. Again, George and I left Darrel to manage the table while we attended the one panel we were interested in. The panel was being hosted by Ron McCain who we had been fortunate to meet at the Drink N’Draw. Ron is an inker and artist who has worked for DC, Image, and Marvel over the years. The panel was focusing on breaking a script down into actual drawn panels. Ron covered a couple of other things as well including how to make similar characters unique. George and I were used as his examples since we were in our company shirts and we got to be fictitious assassins for a few moments. Ron turned out to be an approachable guy and he was a good person to talk to about the industry. He wasn’t the only one either and we might have found someone to work on one of our other projects. 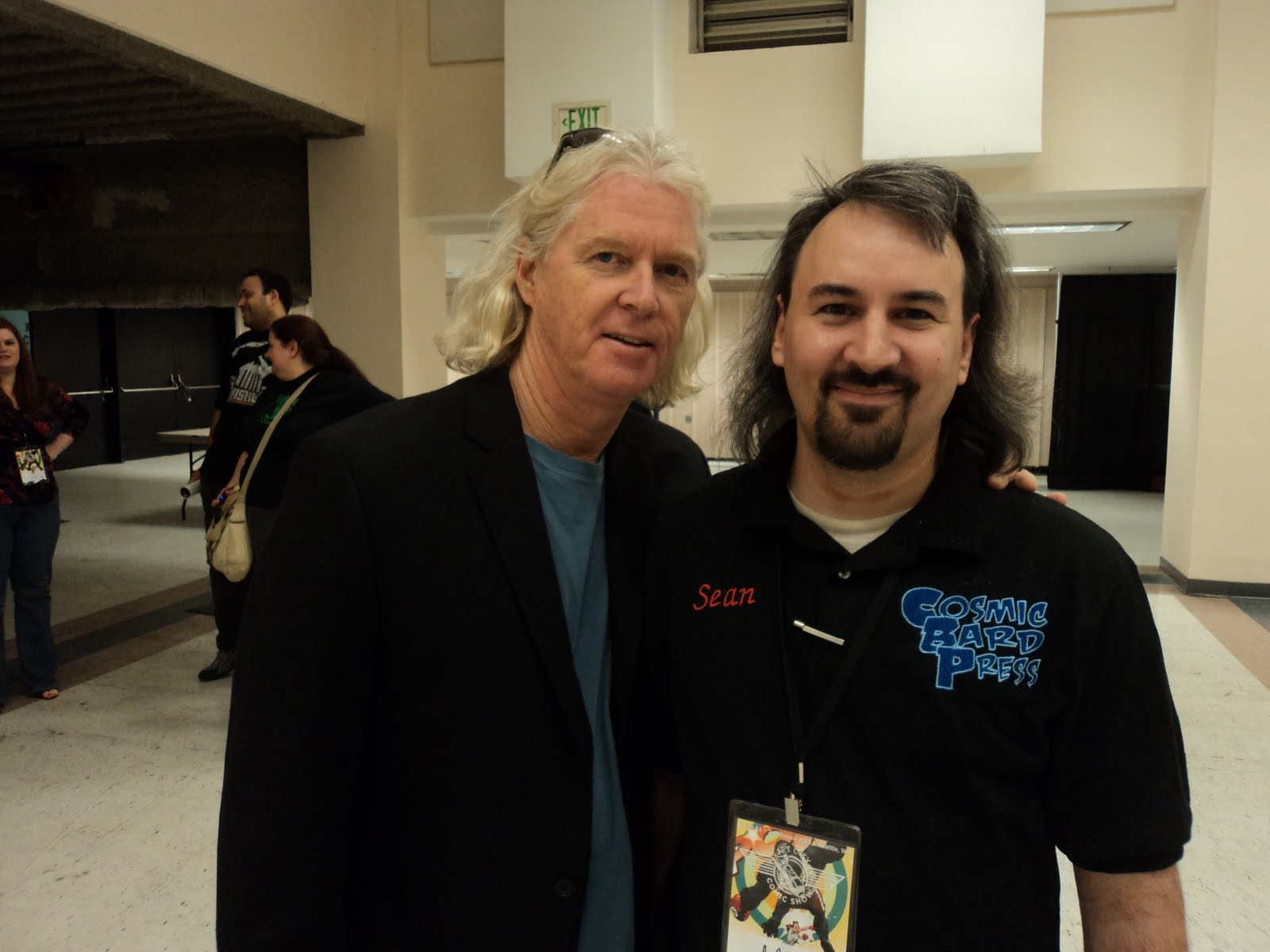 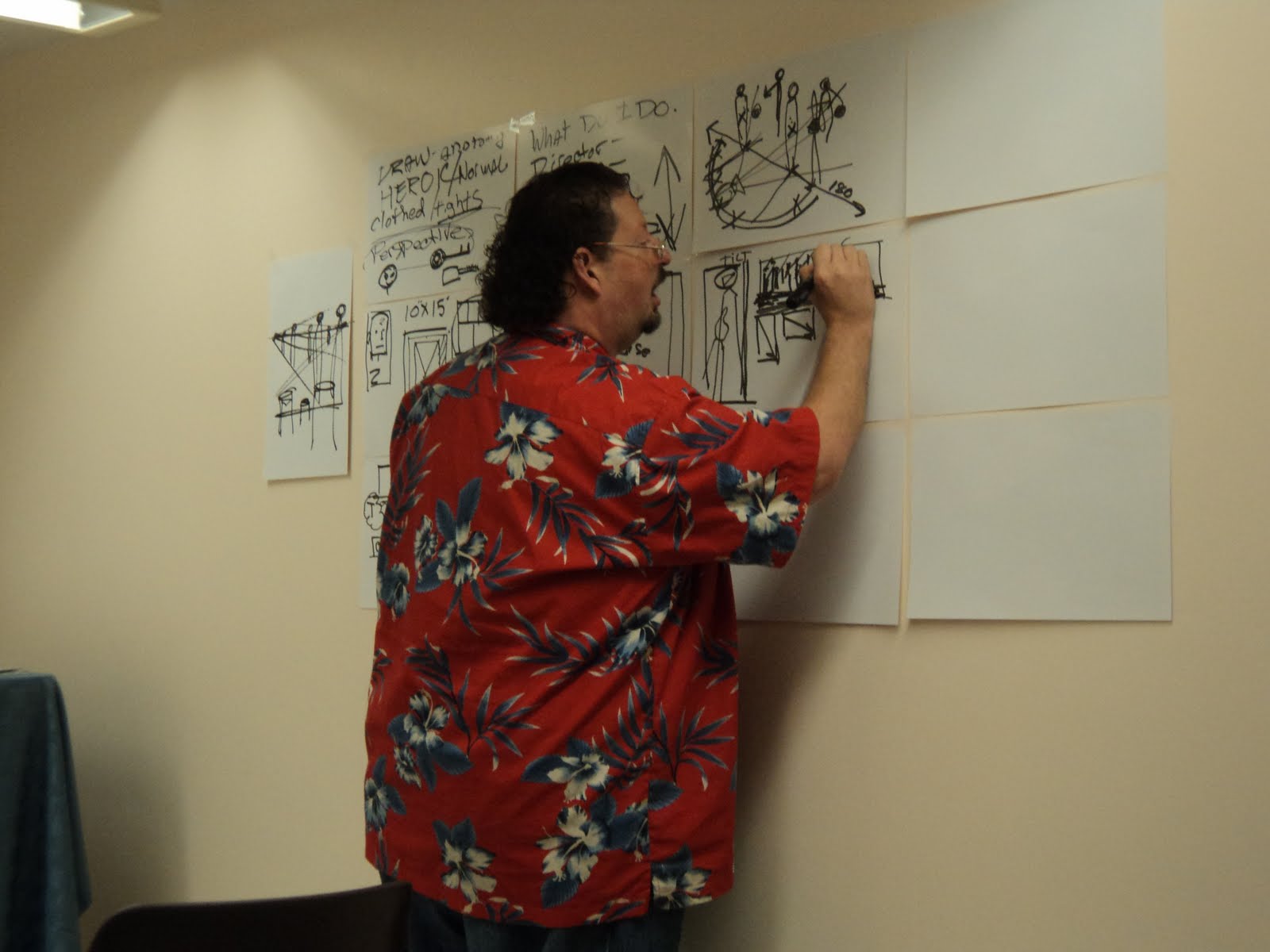 At the end of the day we had sold very little of our wares but had had a number of people take a close look at our books. As I had said earlier, we were going to make the weekend worth every penny we had spent on it. I’d personally say that we did and I think the experience has left us all reenergized. We are hoping to do this again next year and maybe take part in the Dallas Comic Con in May as well. In the meantime, please check out Cosmic Bard Press and wish Darrel, George, myself, and all the others who work with us luck for this next year.