Possums are cute (most of the time). Skunks are cute when they are babies. Cats are out to kill you, but look great doing it. I can agree with that last sentence when I don’t have to deal with them invading my home.

I live in a mobile home. OK, it’s not a ‘real’ house but it is a nice mobile home. Really nice actually. One thing that sucks about mobile homes is the fact that they are raised up off the ground. The space underneath is just asking to be overrun by vermin.

When we moved into our place in 2006 there was existing skirting (the stuff that covers the gap between the bottom of the mobile home and the ground. It seems to have done fairly well at keeping critters out. Well at that point the house was nearly 10 years old and the skirting was beginning to show it’s age. It began cracking and breaking open due to sun, wind, and animals trying to get under it. Eventually they did and I fought a war with possums for a couple of years. I would catch them in a trap and then release them the into a field behind the house. Note to everyone, possums like cat food.We have completely fenced in back yard and it’s an acre in size so I wasn’t too worried about them coming directly back. At this point I would try to fix whatever spot the vermin got in at and go about my business.

This went on for a while and in 2011 we got several things done to the house such as leveling and new skirting. The new stuff would is great. It’s super think and looks decent. They put it all the way around the house. The only spot they didn’t do was the side porch and the outer part of the back porch. They did put it along the house under the porch though. This effectively cut off every point of access for anything getting under the house.

This apparently didn’t last too long. I would hear scratchings under the house so I set up my trap again and tried to figure out how the heck they were getting in. I finally discovered that the house siding UNDER the back porch was rotted and the screws holding the skirting on were easily pulled off. This meant that animals pulled away the skirting in this vulnerable spot and got back into their nice warm (or cool depending on the weather) cosy, home.

When animal take up residence in mobile home underpinning they tear the shit out of everything down there. There is actually a black plastic lining under the house. Behind the black plastic sheeting is the insulation, electrical wires, and plumbing. The cats, skunks, and possums get up in there and make them selves a nice comfortable home, ruining everything.

That hole they made thanks to rotten siding had been sitting on my mind for a while and what I could do to fix it. I don’t want to just seal the house up and have something die under there… oh man no. I need to get the animals OUT from under there. My plan was to do something I saw on a trap of sorts. Basically I got a piece of stiff chicken wire and cut an X shape and bent the pieces out. This design would allow the animal to crawl through easily enough but then they tried to come back under the house the pointy, sharp edges would make it difficult to do and they would loose interest. 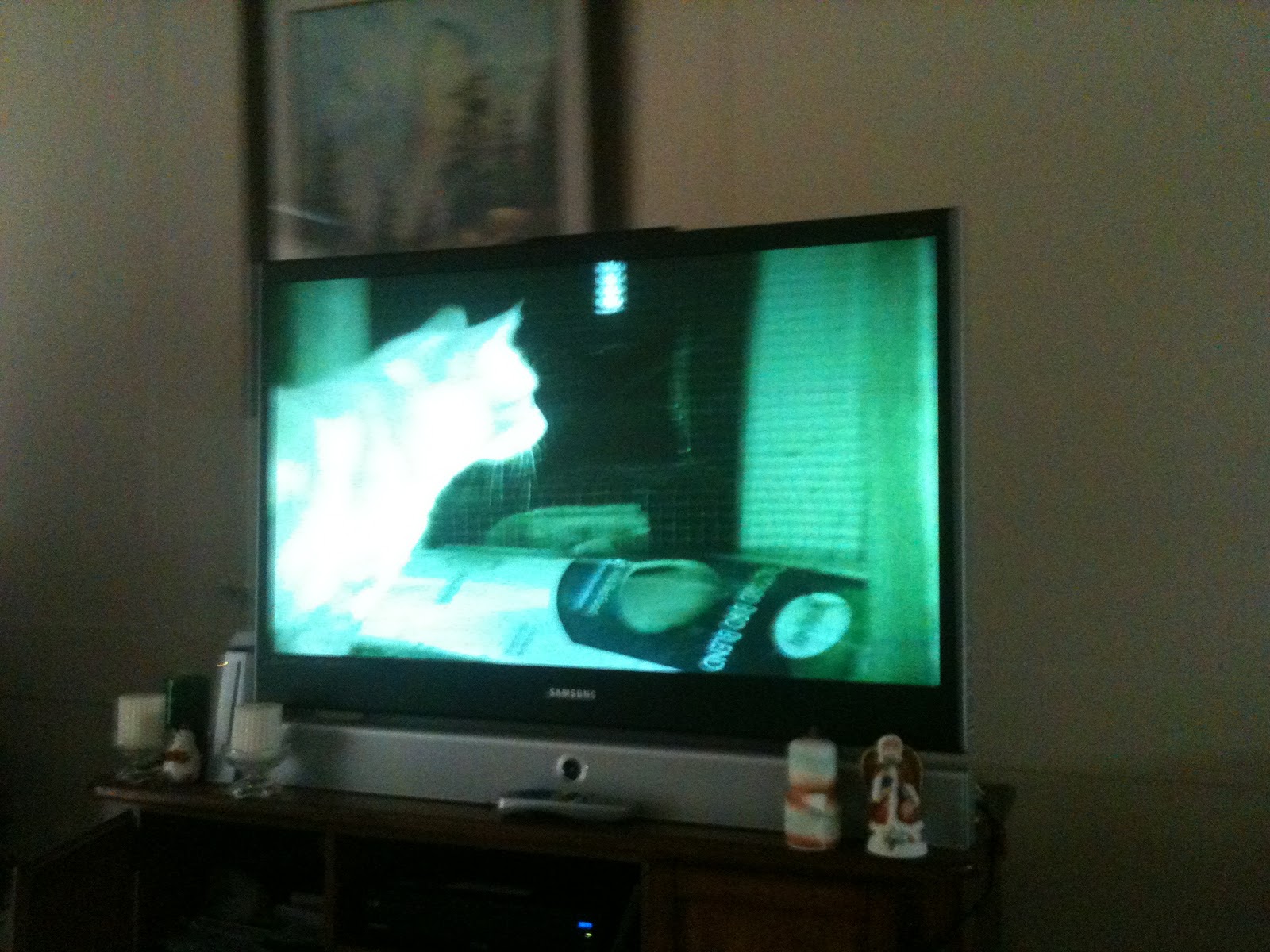 One of the cats investigating my work.

I did that on Sunday afternoon and got the clever idea of hooking up one of the old cameras with night vision and running the AV line into the house so I could see what was going on (via TV). I did this and while it was still light out side I saw the semi-wild cats of the area with my hidden camera. They poked around the new construction and one of them actually went in. It looked painful though. There were big clumps of cat hair on the wire once it got it. Later it came out easily enough but I never say it or any of the other cats go in again.

Once night fell the possum made an appearance. This is a big mother! It would investigate then move away. I think it couldn’t figure out that there was a  hole in the wire to get though. I think it just left to investigate other ways of getting out. From the regular timing of its visits to the hole I think it was making a circuit of the house, looking for another way out. 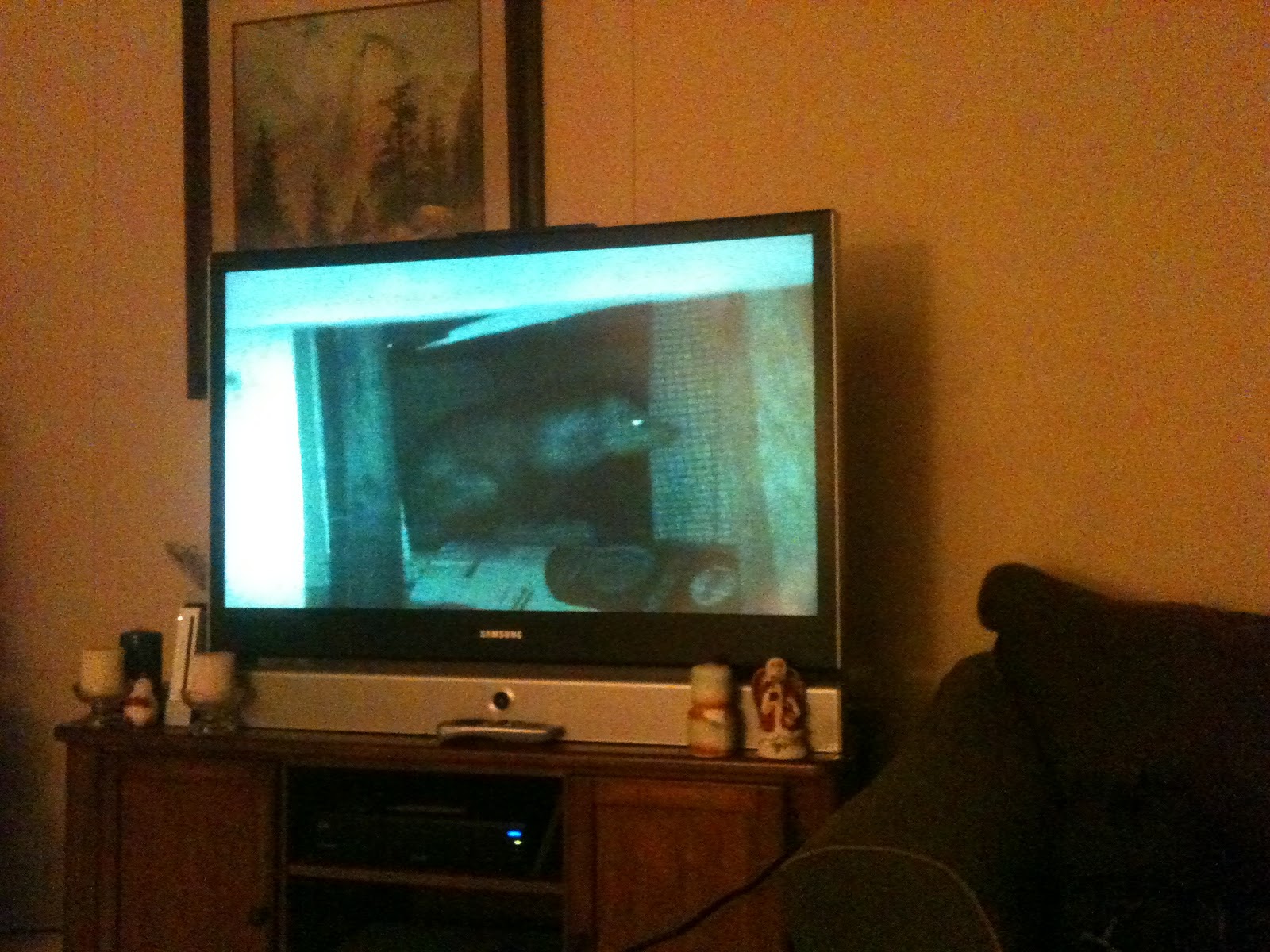 A 2nd possum?
After a bit more a second possum showed up. At least I think it was. It was outside the house and was sniffing around the hole and eventually got through the hole. This tells me that my hole idea isn’t perfect. I will either have to make the hold smaller or bar it up completely and use the old trap method of getting the animals out from under there. Either way it was fun watching all the wild life on my TV screen!