This week NASA announced that they have no plans to ever go back to the moon. Go back?! They haven’t gone in the first place!

I have been looking at a lot of Documentaries on YouTube about the supposed faking of the moon landing. I love a good conspiracy (I think most people do too). If you are not aware of it, there is a segment of the population who believes that the moon landings were faked (as an act of cold war US superiority). There are a lot of strangeness that people have latched onto (some of which I can’t deny).

Some theories say that there were moon landings but that the astronauts that were credited with it did not go (in case something happened the US would not loose face). Some say that it was all faked (the most popular of the conspiracies) on some sort of sound stage. Some even say that Stanley Kubrick ‘directed’ these phony landings and hid tons of clues in his movie ‘The Shining’.

After watching some of the less wacky videos about a faked moon landing, I have to say I can see where these guys are coming from. Some of the stuff just doesn’t add up.

Do you remember that movie Capricon 1? It was a 70’s movie that addressed that possible conspiracy (not directly) but placed the astronauts on Mars. It was a great movie and you can see these guys had the moon conspiracy in mind when they wrote it.

As well as the moon mission being phony it is also believed that the first manned space flight by the Russians was also faked (or a surrogate was used). It’s hard to believe what is true when you had the super powers of the world wanting to flex their muscle and knowing they would do anything to say that ‘they were the best’. 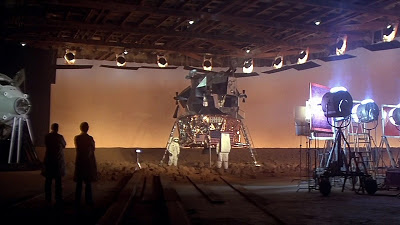 Have you enjoyed our Blogs? Please visit AccordingToWhim.com and use the Amazon link each time you shop Amazon to support us! Thanks.