Today I’d like to talk about the design for the Rise of the Rock Star board. As you may or may not know we are now running our Kickstarter project to fund the game and I have several blogs devoted to the design and production of the game coming over the next several weeks. If you are interested in this sort of thing (planning to put on your own Kickstarter project or just curious) I hope these articles will help you out.

When we first discussed different games to make we all (Chris, Loren, and myself) had notebooks and sketched out ideas. We would set a timer and do a 5 minute brainstorming sessions to see how many ideas we could come up with. One of the ideas I came up with was a circular board with different levels you traveled. I related it to our search for fame through all the things we were doing at the time. We had a public access TV show going, a blog, some scripts, etc… The ideas we came up with that day never took off (then).

Fast forward years later and Loren came up with the idea to make some games. In the time since we did our brain storming session (3+ years previously) we had been working on custom expansions for the CCG NetRunner. This kinda petered out since NetRunner was getting re-released so at the time we had nothing going on so Loren’s idea sounded good.

We all came up with lists again and the fame idea came up again. Chris liked the idea and I agreed that it might be fun so we picked it began all new and exciting brainstorming sessions (where we sit in a quiet house, scribbling down ideas). We began with the base rules (cards and spaces) and I soon knocked out a nice prototype board. 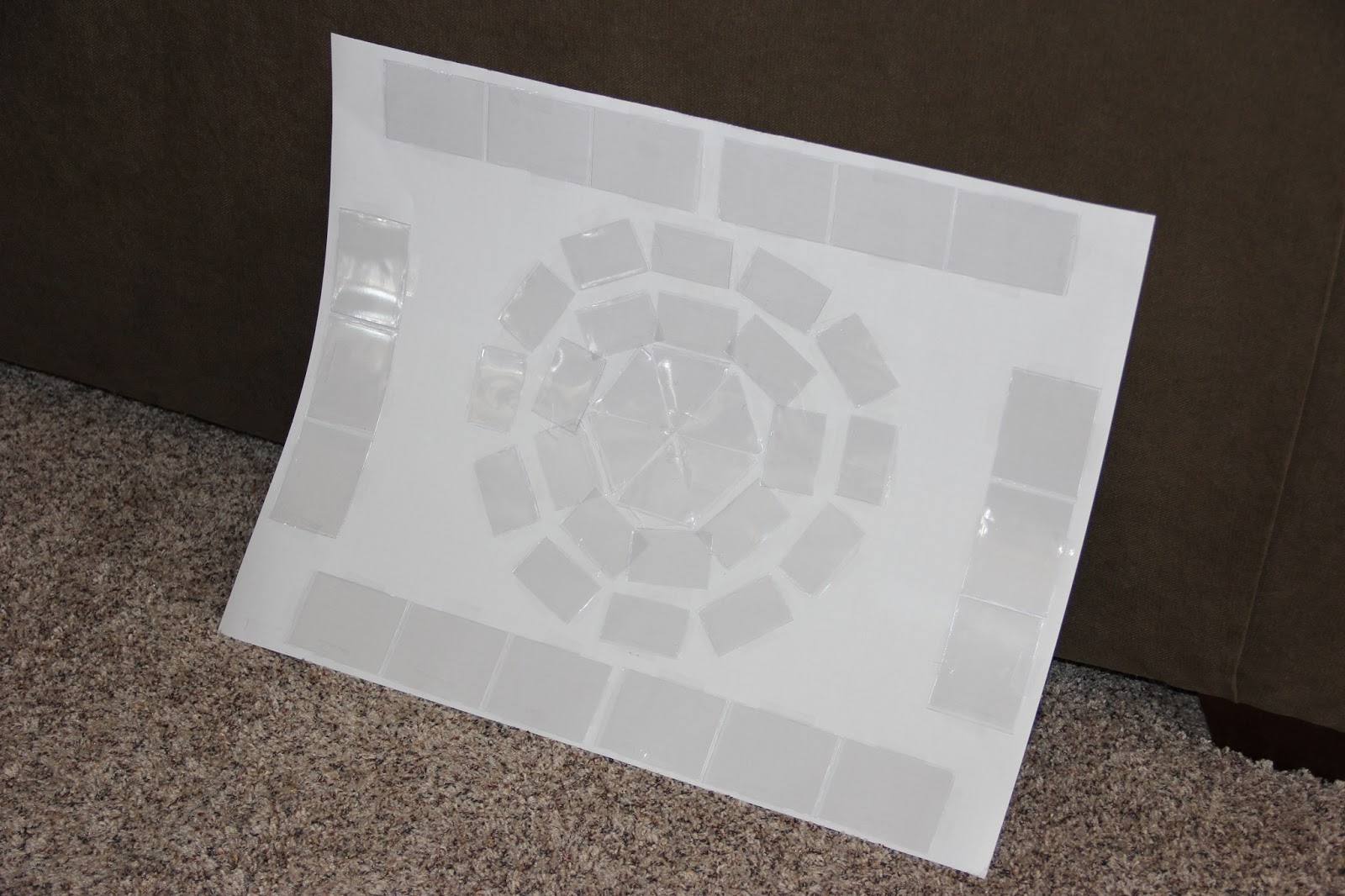 I bought a poster board and took some 9 pocket trading card pages and cut them up. I taped the cut up card pockets in a circular-type shape onto the poster board. The made the card pockets shallow so we cold slide little pieces of paper with the board space text on them in and out. I knew we would be changing the spaces around a lot so this method allowed that with ease. We used that prototype board for several months. It worked well and we did have many changes to most of the spaces on the board.

In the meantime I had been working in Photoshop on an actual board design. We settled on the dimensions for a good sized board (based on the game Sword and Skull… 20×20 quad fold). I knocked up a 20×20 black and white demo board and went to a local print and copy place (that could do large printouts) and got our demo board printed up. Since it was black and white and on regular paper it was really cheap (I think it was about $2). It looked decent enough and we started using it. I 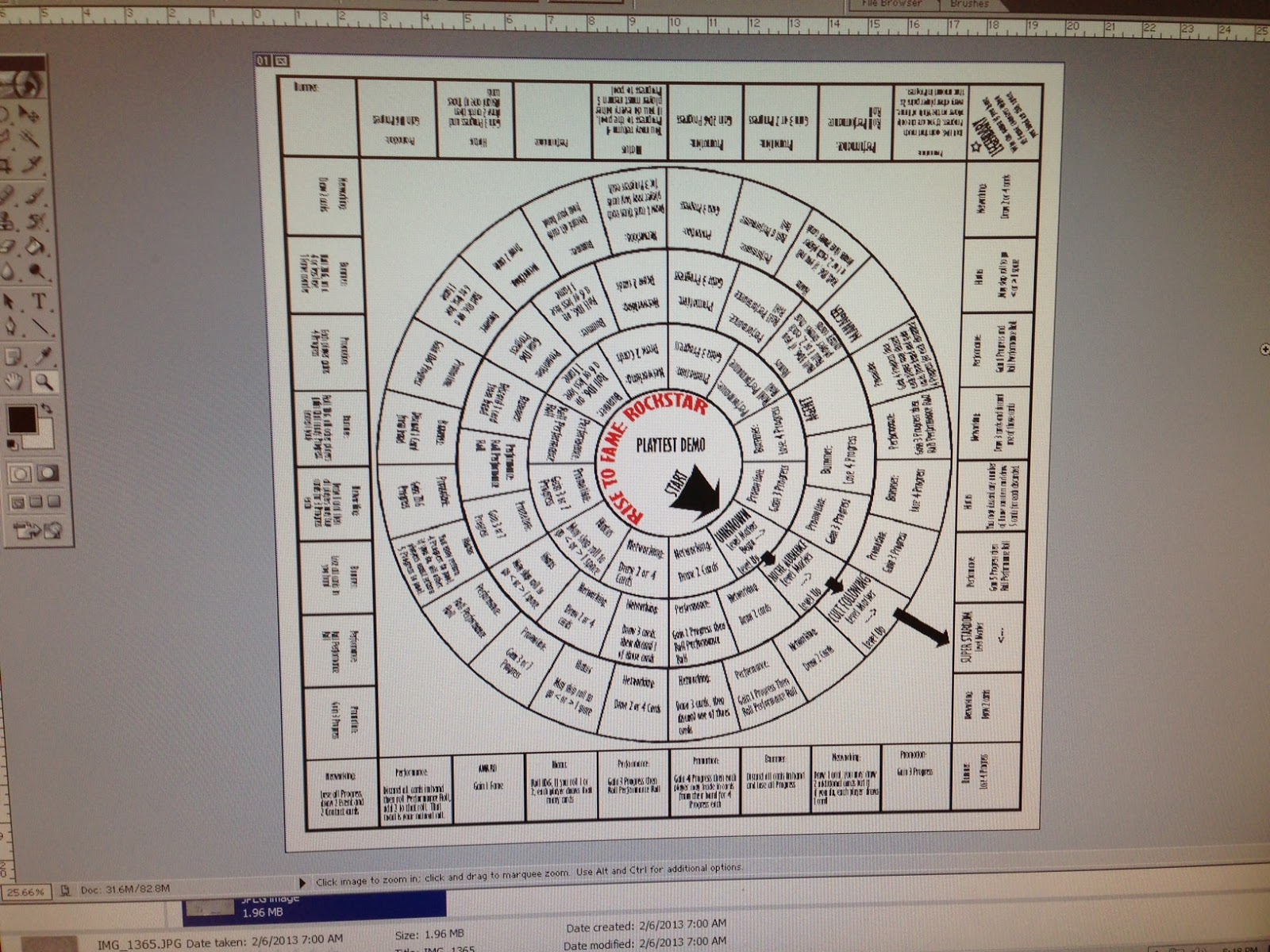 had made some errors on it (like making the game play direction wrong and some misspellings) but it worked well enough and gave me a good idea of what to expect and the direction I needed to go next.

I started with a  totally new board in Photoshop. My thought was to start on the actual board I wanted to use in the final product. I began learning quite a lot about Photoshop (layers and such) and quickly had 100+ layers. The PSD file had ballooned to 500 megabytes.

I had different layers so I could test the board colors, space colors, boarders, words, and graphics. I would print out the corner of the board on colored paper to show Chris and to get his opinion. I went to Google and downloaded some clip art to use in place of real art (to come much later) just so we could get an idea of how things would look. I kinda liked with I had come up with but I REALLY needed to see what it would look like printed up and on a real board. 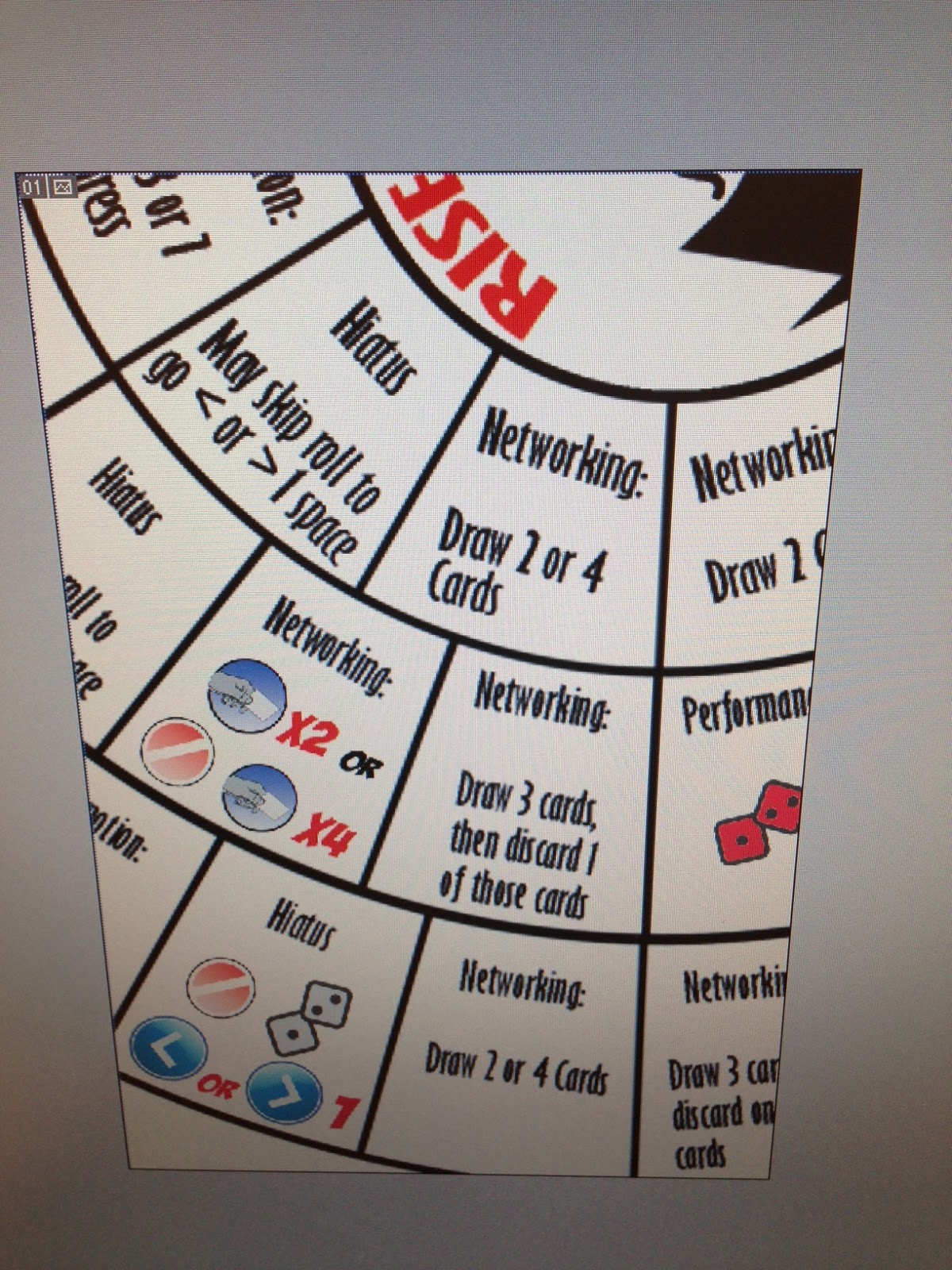 I got online and ordered a pack of blank game boards and boxes (after doing a bit of searching for the best price). When they arrived I decided to take my latest board design back to the copy and print place and get a full color copy made. The price JUMPED way up from black and white to color (try $15 for one copy)! I reluctantly paid the price and within 5 minutes I had it. It looked fantastic! When you are going to have something printed up make sure you make it at a high DPI (dots per inch).

I got some spray glue called super 77 from Home Depot and sprayed the back of the paper and stuck it to the blank board, cut the fold lines on the board and we were in business. The board looked fantastic and really steps up your play testing. There were some minor issues with the board, for instance I
had forgotten to turn off a layer and the word Bummer and Promotion were both occupying the same space. The space seems to read Nuremberg so we joke about landing on Nuremberg (which is a bad thing since it is a ‘Bummer’ space. 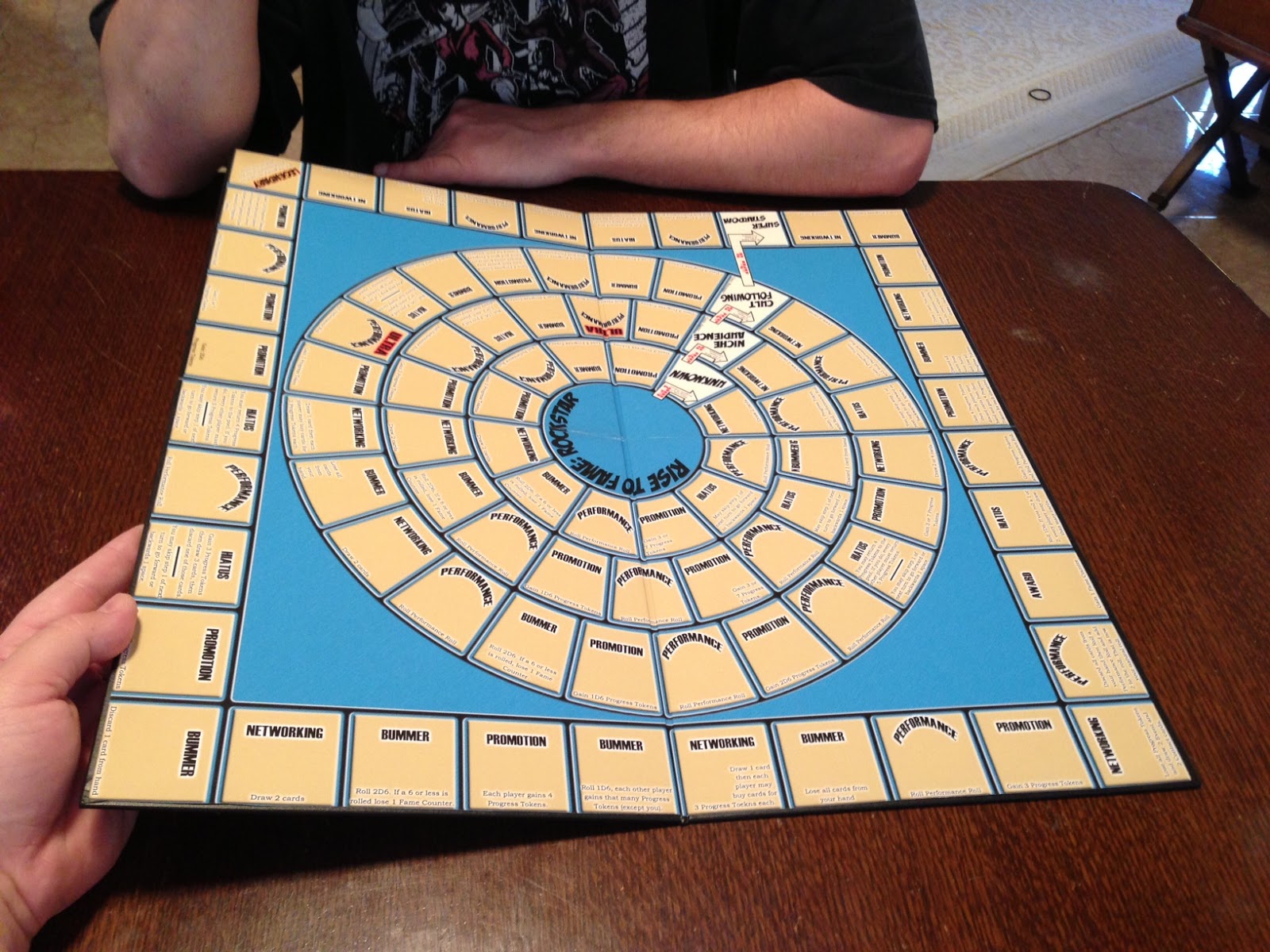 The board was not final at this point. The colors still weren’t right and no art (of course) but it was fine for showing and play testing on. We continued to refine the game play but the board design was eating away at the back of my mind. I just couldn’t come up with a color theme that I felt was perfect. I had been looking at other ‘music’ related games and dark blues and reds were used a lot but I couldn’t find the balance on my board. I moved on to a red background and a ‘steel silver-look’ to the spaces. I was OK, all tough and macho but it still bothered me.

Jump ahead another few weeks and I was in the middle of working with the artist we hired for the game art. I had the idea of showing him the board and getting his opinion and (hopefully) a suggestion or two on the direction to go. I sent it to him and got an email that wasn’t too flattering. He wasn’t mean at all, but he said what needed to be said. (nicely, of course)… the board needed work. He then made my Summer by asking if I’d like for him to work on the board (for an additional fee). I was more than happy to pony up the additional funds to get him to work on it!

With all said and done, if you are not a graphic designer or artist, you might leave the work to the professionals and hire someone you trust. I felt I moved the board along as far as I could and then handed my baby to someone who would polish it up.

Thanks for reading and we would GREATLY appreciate if you would back our game: Rise of the Rock Star on Kickstarter. The project is on right now and ends on July 15th. Thanks so much!