Here is a post about the Kickstarter project we are in the middle of (RockKickStarter.com). During this 60 days we have been posting all sort of blogs about the making of the game (among many other posts). Here is another one of those ‘making of’ posts… about the intro video we did for our Kickstarter.

I am no expert in any one subject. At my 8-5 job I can do many IT related things. I have had my fingers in many different systems and can support most of them and fix complex issues on others… still, I am no expert in any one of them. This kinda sucks because it limits your career. The same is true of the creative world. I can do some doodling but I am not all that great at it. I can make videos and can (passably) act… barely, but I am no expert in either of them. Finally I can edit videos but once again, I am no expert. When push comes to shove and you have to get something done and don’t have the resources to do it, you must jump in and give it your best shot.

One thing you will hear about creating a successful Kickstarter is that you need a snappy intro video. It needs to be short and to the point. It needs to catch the attention and introduce what you are wanting to get made.

I have had the idea for the intro video since Chris and I decided to run the project on Kickstarter. I envisioned a slick video of a rocker plugging into an amp and then strumming on an electric guitar. The camera would then move back rapidly past a crowd of people cheering him on… on his way to becoming a Rock and Roll Legend!

I didn’t want to use any one’s face or noticeable features, I don’t have a crowd of friends to fill in for the audience. I decided it would look cool if the people were all silhouettes and everything had a dark blue/purple glow. How to do it… hummmm. 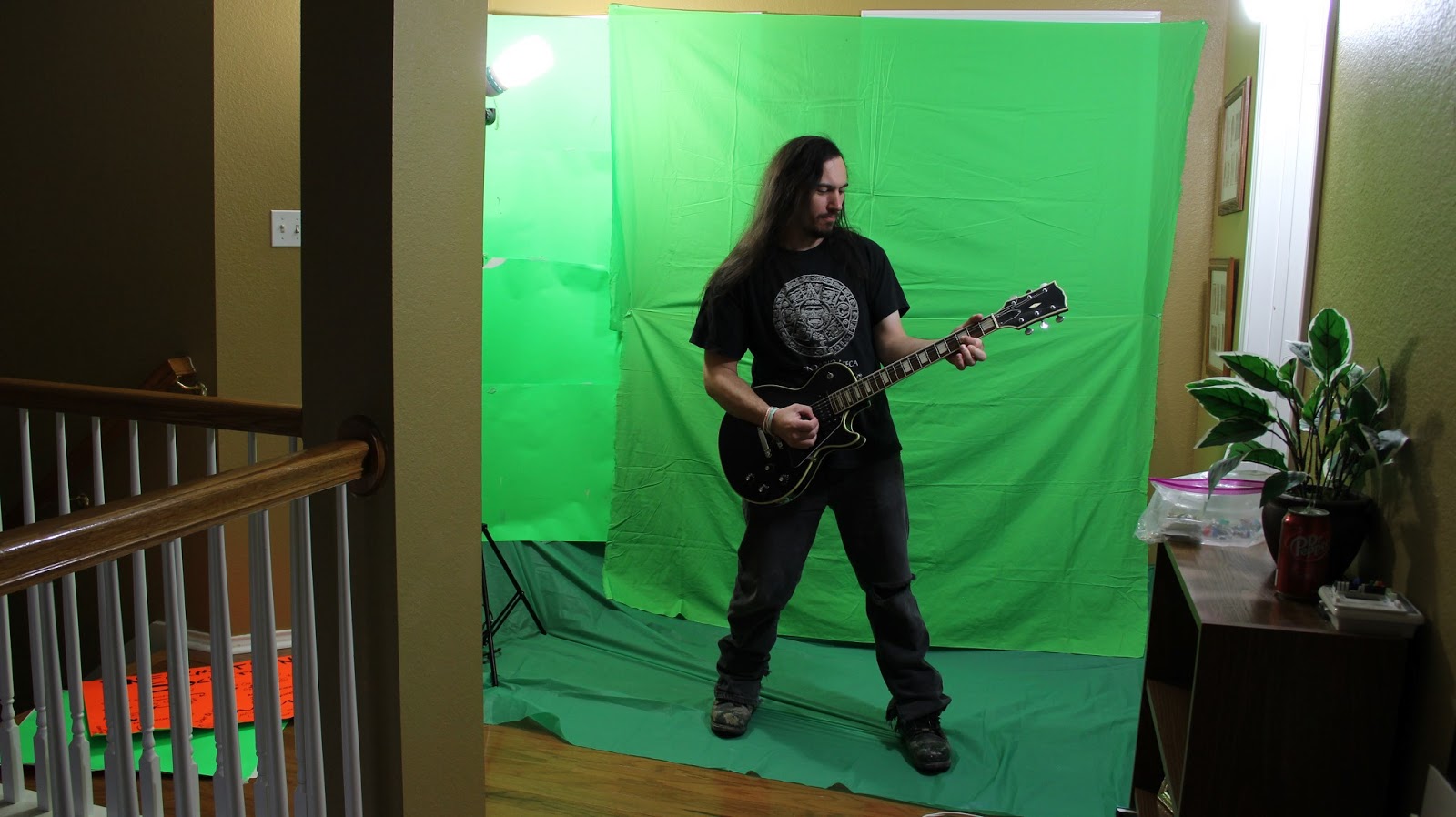 Like I said I am no expert in video production but I am proficient. I know how to use the most popular effects software out there enough to get by and YouTube is full of tutorials so I decided to try it out.

We have done some green screen work on According to Whim (like this gem, and this one) and I know how to get it to look ‘alright’ in post.

I setup a green screen (aka a few pieces of green cloth from Hobby Lobby and some poster board) and I had Chris stand there with a guitar and act like he was rockin’ out, easy enough as long as I could get him to stay within the boundary of the green screen.

Next Chris and I got on our knees with our backs to the camera and raised our hands up and acted like we were at a concert cheering and such. We even put on hats and I put on my wife’s foam Rangers finger and kept ‘cheering’. We did this for like three or four minutes.

Fast forward a month later. I got the footage into the program and started working with it. I started with Chris’ rockin’ but cutting him out (via the green screen) and having his video ‘shrink’ to simulate the camera moving away from him. Then I placed the footage of Chris and myself and made about ten copies of it. I took the footage and cut it up to show different parts. One part shows the back of us with hats on, one with me and my foam finger, one with Chris jumping up and down… etc. I made sure I never duplicated the same action on the same ‘layer’ of audience members. I had about six members on each layer including some of the same footage mirrored so you couldn’t distinguish that all these people are just Chris and myself over and over again.

I then removed all our details, making us look like black cutouts so you REALLY couldn’t tell it was us then rendered 2 different layers of audience members. I then just laid each of the 2 layers (tweaking a bit to make it look more like a real audience and not two people) and simply copied them to produce many layers of audience, some slower, some faster, some a little more to the left, some a little more to the right.

After that I linked those layers to the original layer of the rocker and played with the timing of audience moving past the camera. Viola!

Finally I added some visuals like artistic background, lighting, and other small effects to give it the illusion of a concert. It took a long time and it only lasts for just a couple of seconds but it gives the video the POP I needed. After that footage was some titles and such and Bob’s your Uncle!

We ask that you help us make Rise Of The Rock Star a reality and back us on KickStarter. You can back us with as little as $1 (but it would help so much more if you backed us with alot!).
Thanks so much and keep and eye out for the rest of the Kickstarter’s 60 day project because we will be posting many more blogs. Enjoy!