Today I am checking out Milton Bradley’s Scotland Yard! What a game! What a game! Can you guess I am already going to gush about this one? There have been other versions of this game cause some time in the past Ravensburger bought the rights to it. They produced a couple of different versions of the game but the only difference is the art/components. Same game play.

You play either the Scotland Yard Detectives or the mysterious villain ‘Mr. X’. The Detectives are searching all over London for the fiend and must carefully spread a net in order to catch him. The only problem is that Mr. X plays ‘invisibly’ so the Detectives must be smart and not waste their allotted amount of transportation. If the Detectives cannot find Mr. X after he moves 25 times, then he wins. 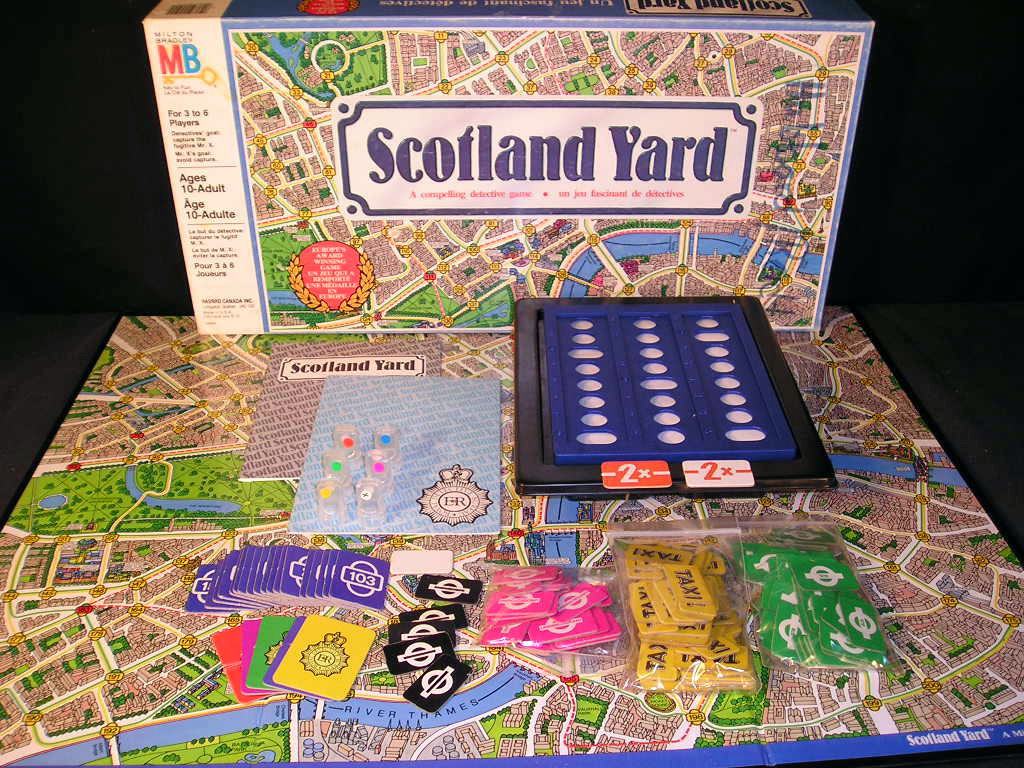 Each detective gets so many TAXI, BUS, and UNDERGROUND tokens to use to move around the map. Mr. X has infinite movement and is no so hampered. Each intersection on the London map is marked with a number and one or two of the three colors of the transportation tokens (yellow for TAXI, green for BUS, and Red for UNDERGROUND). Some road can only be traveled with Bus or Taxi, Taxi or Underground, etc… Players can only move from intersection to intersection using the appropriate token with the appropriate color on the road. If a player runs out of Bus tokens, they can no longer use the bus to move about London, etc… If at any time the detectives land on Mr. X, he has to tell them and the game is up, he is captured, and that Detective wins the game.
Mr. X has a couple of tricks up his sleeve, he has the ability to speed ahead and move twice when he wants (he has only 2 of these). He tells the other players he is using them, marks the locations on his secret notepad and covers up the numbers with the tokens so people know he used them. He does that with every turn (covering up his number with the type of transportation he used to get there). These clues help the Detectives figure out where Mr. X has moved off to. Sounds tricky but you can catch him. It takes a lot of concentration so this isn’t a casual game.

I love this game board. It is probably one of my all time favorite game boards. It is so detailed and has many of London’s more important landmarks. It is like a little geography lesson wrapped in a game! If I could have this as a proper picture, I’d hang it on my wall.

Concentrate REALLY hard on each move Mr. X makes (according to where he started and which tokens he used to move). Also, spread your Detectives out in a nice even way until you can somewhat pinpoint where Mr. X might be. Don’t let him get too far from any one Detective.