by Nathan Stout (of AccordingToWhim.com)
Today I will cover the first episode of Season 2 (considered by some fans to be Season 1 cause the original Season 1 had a different title) but for the ease of tracking most sites have this as Season 2, so I am going to go with that.
For some reason the embedding is disabled so here is the link to the show. It is the CTV version (unedited from the slightly shorter Nick versions). 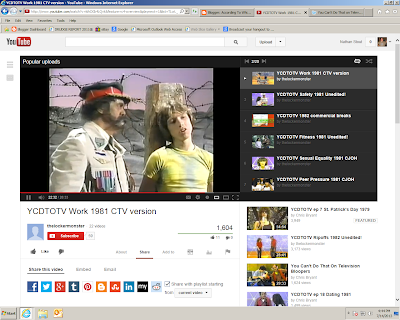 The show seems slightly less polished than later episodes (in the writing department). Although they had the first season to get thing rolling I guess it took a bit longer to get in the groove.
Did anyone notice Moose’s shirt looks like a cross between Star Trek the Next Generation uniform and a medieval tunic?
The format of the show has always been very solid. Starting with this season it stuck to a format for better part of 15 years, you have to admire that.
Les’ Dad character seems to be a little more of a street bum and the Dungeon General hasn’t gotten into his spitting routine as much (always one of my favorites). They haven’t coined the phrase: “Blue Skies, Barthy Burgers, Girls!”… close, but not quite yet.
The other kids (not Christine or Lisa) don’t shine very much and you can see how those two were kept and the rest phased out.
The denture sketch was pretty good and they used the theater set which they didn’t do too often. Later Les plays a one time character, the Art Collector.
My favorite sketch is when Moose and Ross are messing with the cue cards.
Barth shows up on the main stage set (which is kinda strange). Later, when Moose gets water dumped on her, the lace in her shirt is gone. I guess they though it would ruin or something. Later when she gets slimes (a very chunky slime, I might add), the lace is back. Also they wait was way too long to dump the slime on her, she has too much time to regret her decision!