I wrote a blog post about how
dumb it is to keep acting like life sucks so badly, because somebody always has
it better. My reasoning was the standby argument that life is really good,
because somebody always has it worse. There are two people out there at any
given point who those statements don’t apply to, and those two people (he or
she who has it better than everyone and he or she who has it worse than
everyone) are likely constantly changing.

So what about everybody in
between? I would be a fool if I didn’t acknowledge that there is a middle point
somewhere and there are people stuck on the side that is constantly doing worse
than the average person, and people who are blessed enough to always be doing
better than the average person.
One of my favourite memes is the
First World Problems meme. Sometimes it can get a little silly (that what memes
are for) but the simple fact is that it points out a truth about first world
societies. We get angry… I want you to think about that word for a moment.
Angry. 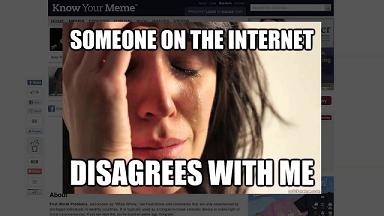 We get angry when we are met with
the slightest of inconveniences. We get our feelings hurt over some of the most
ridiculous of slights. Some people would say we’re soft, and that may be the
case.
There is another side to this
though. The human race has only improved so much over the years, because we
were willing and able to elevate our standards for our living conditions and
our standards for our thinking. I argued in the other article that there are
children who have it horribly in Africa, and I
stand by the argument. On the other hand, as a percentage of the worldwide
population who faces starvation, is lacking clean water, and has no access to
modern medicine, I believe and hope that we are improving every day. 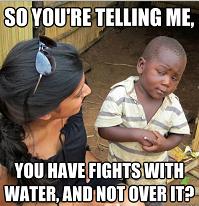 As much as we should show gratitude
for all the opportunities we have, and all the small luxuries we have that
prior generations had no access to, we should also set out sights higher as a
society. This means that while our absolute basic needs are very few, our
idealization of basic needs should also grow.
There are those who argue things
like “healthcare isn’t a human right,” meaning modern healthcare, of course,
because I’m pretty sure we’ve been licking our wounds the whole time. Why can’t
healthcare be a societal right though? We see what’s happening with the measles
lately. How much of that is the anti-vaccination people, and how much of that
is the lack of affordable healthcare?
There are those who say things
like “equal opportunity, but not equal outcome,” and there is some wisdom to
that. It really is nearly impossible to create equal outcome, because too many
people have self-defeating inner dialogues. It doesn’t mean that we can’t
strive for equal outcome to some degree as a society. In fact, I would say that
many of the problems we have in our society come from a sense of hopelessness
when the discrepancy between the life we feel should be possible for us and the
life we actually lead is a wider gap than it has to be.
I’m socially liberal, but I’m
also a realist. This always brings me to this odd crossroads in my thinking. I
support movements like Black Lives Matter, but also believe that all lives
matter. I don’t believe that the answer to one form of hate is another form of
hate. But I also realize that there is a reason that the Black Lives Matter
phrase is important. We’ve come so far in our strife for equality, but the
black community is still continuously shit on. I know some of it is sadly self-inflicted
by the black community onto the black community, but the rest of society has a
bad tendency to throw out some statistics and some blanket statements about how
they must also be willing to help themselves, and figure that our work is done
here because we stated some wisdom.
Here’s what I’m saying, and this
is at the core of everything that I believe. We’re in this together. It’s true
that you can’t help others until your own needs are met. It’s true that you can
never truly love another until you learn to love yourself. But to me it’s more
important that we’re in this together. It’s the reason why I’m going to roll my
eyes at the idea of “safe spaces,” but also why I’ll always understand our need
to treat each other with basic respect so that we can feel safe talking to
others.
But respect goes both ways, and
the problem is that the dialogue we’re having on social media is highly
disrespectful at times. We’re simultaneously very anti-hate, but extremely
hateful. It’s what I was saying earlier about anger. We’re angry that societal
change is so fucking slow. But it is slow, and it is always slowed down by
hate. Anger often manifests itself as hate.
First World Problems are still
problems, and our brains work to solve problems. I feel that almost every
problem is worth solving to some extent. The solutions sometimes shouldn’t be
implemented, but solutions should often be reached. 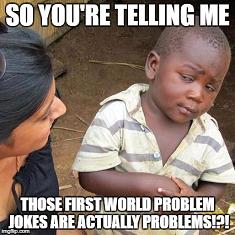 There are those out there who
have it worse than we do, but when we do the hard work to solve our biggest
problems their problems are later easier to solve. It’s the trade off.
Societies and individuals make horrible mistakes as well as trivial mistakes
and create great, or not so great, problems. Solutions are found to those
problems, and those who follow either avoid those problems, or at least solve
them quicker if they couldn’t avoid them. That’s how education works.
Maybe oppression isn’t as major
of a problem as it once was, but if we can eradicate true oppression then we
certainly should. It’s good for our minds to solve problems. It’s good for our
society to solve the problems together. I want to live a nice, luxurious life.
I want everyone to be so blessed. It’s not that feel like we should martyr
ourselves because we have it so much better than others. I do feel that
gratitude is not martyrdom though, and envy doesn’t lead to gratitude. 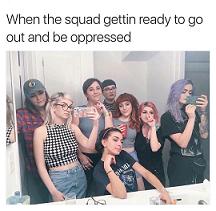 I’m socially liberal, but I’m
also a realist. I maybe don’t believe that everybody has the right to have
whatever they want whenever they want, but I do believe that everyone should
have the access to the abundance in exchange for being good and hardworking
people.
There is an old phrase that says
something like “give a man a fish and he eats for a day, teach a man to fish
and he eats for a lifetime,” and I believe that. As I said before, that’s how
education works. Let’s take that analogy a little further though. Sometimes you
have to give the man a fish so that he knows why he wants to learn to fish in
the first place. And if not everyone has access to a body of water abundant
with fish then teaching a man to fish has really done no good.
We have it better than many in
the world, but it’s imperative that it keeps getting better for us, so that it
can be better for as many people as possible. The more people who do better,
the more people who can aspire to do better.
Chris McGinty is a blogger who is
really confused why he can’t find any good results on a search for “first world
problems black people.” Wait. Nevermind. He thinks he gets it.