In Nathan’s first SummertimeFuntime post, he spoke of the time honored tradition of traveling over summer
vacation. I’m not sure that I can remember every time that my family traveled across
country for summer vacation, but we did go somewhat frequently to see my
grandma in Pennsylvania, and my grandparents in California. We somehow got
lodged in the middle living in Oklahoma, so it was always a two or three day
trip – mostly three, because I remember once that my parents did the switching
off driving and sleeping thing so that we could make the trip in two days, and
it was miserable for everyone.

I don’t remember being too bored
in the car, though I’m sure at some point I was horribly bored. I remember
learning how the mile markers worked and ticking off the time based on roughly
a mile a minute. I remember that trains were a source of amusement, especially
if they were going the same direction as we were. We’d be going slightly
faster, so we’d eventually get past it, but I had time to examine all of the
cars. I also had a brother in the back seat with me, so we could “play” if you
want to call being strapped into a seatbelt playing. And of course there was
the license plate game, where you try to find all 50 states on the back of cars
and trucks in the traffic around you.
The thing that I personally liked
about the trips was the opportunity to listen to music. We’d sometimes tune in
a radio station for about thirty minutes, but mostly we’d listen to cassette tapes.
My parents have always stayed reasonably current with music, so I became
familiar with many albums that are still in my top favourites to this day. My
mom had even made a mix tape of many of the vinyl singles we had.
Lindsey Buckingham – Holiday Road
I haven’t really traveled too
much in more recent years, so I have no idea if Stuckey’s still exists. If only
there was an online tool, maybe we could call it a search engine, where I could
go see if Stuckey’s still existed. I remember stopping at quite a few of them.
I think we may have eaten at one at some point, but I’m guessing my parents
didn’t like it much, or felt that it was better to eat at fast food places that
specialized in road food. Stuckey’s was merely a gas station and bathroom break
for our family. They had souvenirs, but there were only so many times I could
look for my name on a mini license plate.
We once stopped at a gas station
called something like “Skunk Gas.” Ok, for this one, I decided to actually use
that search engine thing that I just created in the last paragraph. It was
called Stinker Station, apparently. 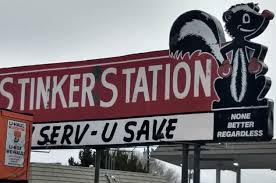 Here’s the funny thing. We ended
up having to stop an hour later to have the van checked out. The gas we bought
was bad in some way, possibly that it had lead in it when it was supposed to be
unleaded. The van started driving horribly. The mechanic cleaned the gas tank
in some way, and then we were on our way again. I think the thing that was odd
to me was that on that trip I was old enough to understand rudimentary branding
and marketing, and it seemed weird to name your gas station after a smelly
creature. This poor branding was only reinforced by getting bad gas.
Chris McGinty is a blogger who
has seen “Holiday Road” performed live by Lindsey Buckingham twice. He didn’t
have to stop at a Stuckey’s to get to either of those shows.