I wrote about the traveling part of the summer vacation, so now I think I’ll try to remember some of the events
that happened once we reached our destination.

When we would go to Pennsylvania,
it was to visit my dad’s family, and we’d stay with his mom. We would always
make a secondary trip to New York State to see his sister, her husband, and
their two sons. They were nice people. I should maybe remember more about them.
They lived reasonably close to Niagara Falls. I’ve been to Niagara Falls twice,
but never been to New York City. Niagara Falls is pretty amazing to see.
On July 6, 1980 (unless there is
another instance of this happening that I didn’t find), we went to see a Pittsburgh
Pirates game. According to one of the little league pictures from a previous post, my favourite team was the Pirates and my favourite pro was Dave Parker.
Those were my dad’s favourites. I really didn’t follow baseball. I’ve always
enjoyed playing sports, but watching sports isn’t really my thing. This is
probably a testament then to how patient my brother and I could be when
necessary.
The game went on for 20 innings. They
were playing the Chicago Cubs, and if I hadn’t remembered that one little fact,
I don’t think I could have found the game. According to this website, the
Pirates were likely to win all the way up to the eighth inning, but the Cubs
scored one run in each of the last two standard innings, tying the game 4 to 4.
There were then ten innings of no scoring. My parents gave my brother and me
the option of leaving, but we wanted to see how it ended. We stayed all the way
to the end; and lucky for me, since the Pirates were apparently my favourite
team, Pittsburgh finally scored and won the game. The game lasted 5 hours and
31 minutes.

I don’t have too many specific
memories from visiting my mom’s family. My grandpa was a movie buff, so we
spent a lot of time watching movies between my brother and me playing outside.

As an aside, I think that summer
vacations and Dungeons & Dragons are the two main reasons that my brother
and I were close. The third, possibly more important, reason is that he traded
me his “Union of the Snake” single for my “You Belong to the City” single.
These were singles that my mom knew we liked, but when they were bought the
ownership was sort of randomly assigned. The reason that this is probably an
odd trade is that we each had the ability to listen to either single at any
time. I think it was just the knowledge that it was technically mine that made
the difference.
One summer vacation to
California, I had to take a break from weekly visits with my friend Kent,
during which we would play with our Star Wars figures. He’d seen “The Empire
Strikes Back,” and because of that my mom ended up taking my brother and me to
see it. I don’t remember if Kent had seen “Star Wars,” but I certainly hadn’t.
My grandpa had a bootlegged copy of “Star Wars,” and I watched it at least a
dozen times on that vacation. It wasn’t even a very good copy of it. It was
taped with a video camera off of a film screen, and then it was probably copied
a number of times. Did I mention my favourite team was the Pirates?
There’s a scene in the novel “Less
Than Zero,” where one of the characters is bragging that he spent $400 to buy a
bootlegged copy of “The Temple of Doom.” 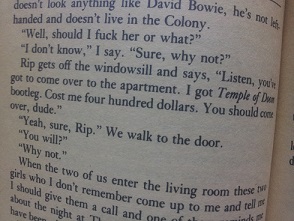 I don’t think my grandpa paid
anything for that copy of “Star Wars,” but I brought that up to give a point of
reference to how difficult it was to get hold of things back then. Home video
could sometimes cost $100 for a video tape. Nathan brought up playing Atari in
one of his Summertime Funtime blog posts. When home video games were a new
thing, the games usually cost between $20 and $50 in 1980s dollars, so there
was a lot of temporary game trading going on between neighourhood friends to
get to play games you didn’t own.

One final thought about the low
level criminality of my mom’s family. One of my uncles had a job at Carl’s Jr.
This is a place that I would have never have known of from my own experience if
it wasn’t for having family in California. Even when the Air Force transferred
us to California, it was because my dad had put in for a possible transfer based
on my mom’s family being out there. That particular year, Carl’s Jr. had a
scratch-off game that had prizes like free burgers and such. My uncle kept
bringing home stacks of these scratch-off tickets, and my brother and I got to scratch
them off. It was pretty fun.
My dad and I went to Carl’s Jr.
with some of these tickets one time, and we got our food. When they gave us our
meal, I was surprised that they only gave us one scratch-off ticket. I looked
at my dad and asked how my uncle managed to get so many tickets when they only
gave us one, and my dad said, “I’ll tell you later.” He then had to explain
that what my uncle was doing was technically not right. Oops.
Chris McGinty is a blog… you know
what? Screw George Lucas and his bullshit Special Editions. Even though it was
hard to see anything, especially in the cantina scene, that bootleg was just
fine.