I’m not a very fast reader, but
I’m going to really quickly list my summer reading for 2019:

The Tommyknockers by Stephen King
Hmm. I thought I’d get more word
count from that list.
Interestingly, the timeframe of
“The Tommyknockers” takes place mostly over the course of one summer, and since
it took me July and part of August to read it, I almost read it in real time.
My favourite author is Stephen
King. I probably got that from my dad. My dad reads faster than I do though, so
my dad has read everything Stephen King has written that he has access to.
Because my dad is such an avid reader of Stephen King, I once asked him what
his least favourite book by King was. He responded “The Tommyknockers.” In this
way, I maybe went into the book expecting to be disappointed. 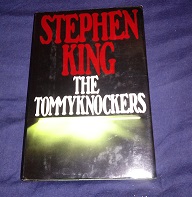 It was good overall. It has an
imaginative concept, and mostly reads well. My basic problems with it, and
these were real problems for me fully becoming invested in the story, are the
two following issues:
I wasn’t emotionally invested in
the main characters – The story revolves around two main characters, a few
secondary characters, and a large number of background characters. Stephen King
is a master of developing characters. Even the background characters are mostly
2-dimensional. The main characters are well developed, so that’s not a fault of
the book. I personally wasn’t emotionally invested in what they experience, so
it’s possible that a reader who is invested might enjoy the book more than I
did. 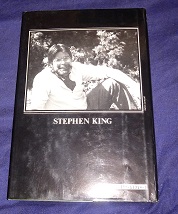 There was a side plot that was
interesting, but took place mostly “off screen” – One of the strong points of
“The Tommyknockers” is that when King starts to tell tales of what’s going on
with other nearby characters, some of the tales are really good. Some are
dramatic. Some are comedic. Some are horrific. Many of them are good stories on
their own. One such story becomes a secondary plot that is always present in
the rest of the book, but isn’t treated as a secondary plot in some ways. It
felt like more should have been done to stress the importance of the plot.
I’m reading more or less in order
of release, though through the years I’ve certainly jumped around. I’ll talk a
little about one of the more modern King books I’ve read below. I want to
mostly say that if you were arranging your King reading experience by overall
review quality, my vote would be that you put “The Tommyknockers” lower on your
list. It doesn’t need to be removed from your list, because it is worth the
read. I’m just not telling you to rush out and read it before other books. King
does have a tendency to refer to other books he’s written in his books, but it
doesn’t mean you have to read them in any given order. Besides, the books he
references (The Dead Zone, It, and another that I’ll discuss below) are all
books that are better reads anyway, so even if you’re reading by order of
quality, you’ll have read them.
Now, I’m going to get into some
details about the book, so if you’re like me and really don’t like knowing
anything at all going into a book then don’t read any further than this
paragraph. I’m not getting into any major spoilers here though. I’m going to be
talking in some vague terms that may hint at the plot, so it’s up to you.

I play a game called “Ingress”
that is what’s known as an augmented reality game. The most well-known
augmented reality game is “Pokemon Go,” but the “Pokemon Go” engine was built
on the “Ingress” game. The basic idea of “Ingress” is that there are these
beings that shape our reality, known as Shapers. There are two factions: The
Enlightened, (which is pro Shapers, and is the faction I play) and The
Resistance (which is anti-shapers).
There are players who have told
me that they only joined The Enlightened because it’s what their friend played,
but that they would be Resistance if the game was real. My response has always
been, “I would be Enlightened, because I’ve read Arthur C. Clarke’s
‘Childhood’s End.’”
“The Tommyknockers” is like the
opposite of “Childhood’s End.” And both share elements with the “Ingress”
backstory. This is not to say that either is a direct rip off of anything else,
but rather that if you play “Ingress,” you should read both of those books,
because they sort of show what kind of effect that the Shapers in the “Ingress”
backstory could have.
I want to talk about “Under the
Dome” by Stephen King real quick, so again no major spoilers, but a little
hinting as to the plot. King has said that the idea for “Under the Dome”
existed for a long time, and if you’ve read “Under the Dome” before you read
“The Tommyknockers,” you’ll see a number of similarities of things done in not
exactly the same way. I get the impression that King was experimenting with
some basic ideas here that he ended up doing better in “Under the Dome.” The
books are not the same by any means, just odd similarities. Also, the TV show
for “Under the Dome” is not good after the first season. It goes way off in
another direction. I had to stop watching, because I was so apathetic. Read the
book. If you’re at all interested in the show after that, watch the first
season of the show, but then tell yourself that the show ends after that
exactly the way the book ends. That’s just my opinion.
Chris McGinty is an Enlightened
Agent who finds it interesting that it was green light in “The Tommyknockers.”
N’Zeer Technology Perfection Truth. Help Enlightened Capture All Portals. Begin
Journey Breathe XM Evolution. He’s also a blogger.