In an effort to curb the tide of cash loss (and now that our oldest is big enough to ride some rides) I am trying to bring it back local and visit our regional park, Six Flags Over Texas. Am I saying SFOT is second fiddle to Disney… well duh. However for the 3 of us it was $226 for 3 season passes (versus $3,000 for Disney season passes). Lemme do the math on that real quick…

So this series of blogs will deal with my visits to the parks and the costs associated with it. It has been 4 years since I went last and then nearly 10 before that. I grew up in the Fort Worth area so SFOT was the summer place to go. Not like my older brother (where it was literally like hanging out at the mall everyday) but a special trip we got to take every once in a while. Alot has changed over the years and alot has not. I’ll cover all that stuff too.

To begin we live about an hour and ten minutes (on a good traffic day) North West. We can’t just jump in at a moments notice and go but it’s not too bad. I had to consider the distance when figuring out if I wanted to do the season pass thing. I figure it was preferable than a 2 hour drive to Love Field, a 3 hour flight to Anaheim, etc…

I bought 3 season passes during the Labor Day sale Six Flags has. They said it was their lowest price of the season although the price seems to be very similar on the Black Friday week sale too. Anyway it was a pretty good deal as long as you can go a few times. You get admission for the rest of 2019 and all of 2020. They have the different monthly-paid membership plans but I just didn’t want have another monthly bill. (author’s note: After having visited a couple of times, I think perhaps we will get the Memberships next year. I’ll cover that decision and the perks that pushed me to that thinking in another post). Here is the breakdown for passes and such at Six Flags:

There are some other things I didn’t list at varous levels like coupons, free passes to the seasonal haunted houses, bring a friend for free days, etc. I just hit the major points to consider.

I went with the Gold Season passes as I said before, but perhaps next year we will go big. Just want to test the waters first. 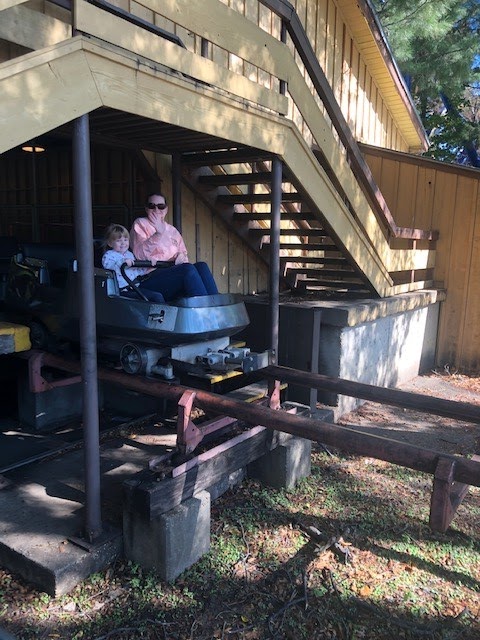 When you buy a pass on sale you have to go before a certain time to get the free upgrade (from regular to Gold for us). We had to go before the end of October. Me, myself, my 4 year old, and a 1 year old went. We planned to go for just a couple of hours to pick up the passes, ride a few rides, and test out how well the 1 year old dealt with it.

The park looked basically the same as it had 4 years ago (with the spooky decor added). I am pretty miffed the train is shut down until the Aquaman ride is done. I know my kids would love that. I did notice the pain was really looking drab on buildings (especially the Looney Tunes area). The ride’s also REALLY REALLY need repainting. Other than visual paint issues, it looked to be in good shape. Next year is the 60th anniversary of the park so we will probably see quite a bit of spiffing up over the next 12 months.

We headed over the Mini Mine Train first so my 4 year old could ride. She loved it. No line at all. She’s not quite tall enough for the Mine Train so I rode that one myself. We also hit the Caddo boat and my wife rode the Superman tower. I got to ride my beloved Shock Wave and me and my daughter rode the Conquistador. Daughter rode Boot Scootin twice and me and her rode the Chaparral Cars. I let the Wife ride the Giant while I watched some Boot Scootin. We stopped at Lone Star Twister Pretzels for a snack. Between the pretzel, cheese, and large drink we shelled out $15. The pretzel was junk. I hate reheated food. This is not a fresh pretzel… for $10 it should be.

We left after that. It was 3 hours total and it wasn’t too crowded. No long lines for the stuff we rode (except the cars, which is slow to begin with).

As we walked through the Texas section I noticed how the addition of the Rodeo ride, it really ruins the vibe in that area. It looks so ‘plonked in’. I guess they added this ride while I was on my hiatus. That whole area looks so ‘wrong’ somehow. IDK…

Join me next time for my next visit and the upgrade I purchased.