by Nathan Stout of According To Whim.com

Last time we visited the park during Halloween so we could pick up our season passes. These 2 most recent visits cover our visits in November and December during Holiday in the Park.

After our first I began researching the Dining Plans. This time of year they are on sale and after seeing how much we paid for food and drinks during our first trip (and assuming we will go several more times) I decided to spring for it at the cost of $102.42 with tax. This was the on sale deluxe dining plan (the biggest one you can buy). You get:

This plan is good at any Six Flags park as well. Having spent $6 on a drink alone convinced me that the refill bottle will big the big money save in the end. Most meals at the park are between $14 and $17. Snacks are between $5 and $10.

The one ‘trick’ to this plan that plays into Six Flags favor didn’t come to my attention until AFTER I bought the plan. Lunch is server until 3 or 4 and Dinner is 4 onwards. That means that if you get to the park after 3, you can’t use your lunch credit and if you leave before 4, you can’t use your dinner credit. Sneaky…

We visited on Sunday November 24th (me the wife and both kids). It was a bit cold and the crowds were bigger than last visit. We had to ride the tram from the Nissan part of the parking lot. The trams aren’t very friendly to anyone carrying large items (strollers) or for older or impaired people. we struggled in with all our junk made it in.

We got the dining plan attached to my season pass then went over to the All American Cafe to get my refillable bottle and our first drink. Then we headed to Spain, stopping to ride the Carousel at the front of the park. In Spain we rode my daughter’s favorites (Conquistador and the Sombrero). We ate some Fajita Nachos at Casa de las Banderas. They were ok, nothing to write home about. The baby was already getting fussy and the cold didn’t help. Somehow we had been there for almost 3 hours so we rode the Sombrero one more time and headed out, stopping at La Cantina for a funnel cake. It was AWESOME! Kudos for still making these in the park and not reheating pre-made funnel cakes. A+++

So for those of you keeping track of our spend/save totals, here is where we sit: 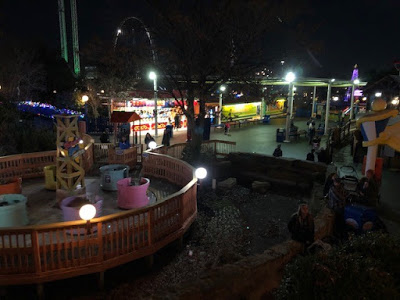 We went back on Friday December 6th sans baby so the 3 of us could have a lot more fun. The park opened at 5pm and we arrived about 5:30. Very low crowds all night. We got started in Buggs Bunny BoomTown. We rode Speedy Gonzalez’s Trucking Across America, Silvester and Tweety’s State Farris Wheel, Yosemite Sam’s Texas Tea Cups, Wile E. Coyote’s Grand Canyon Blaster, Bugs Bunny Cloud Bouncer, and Marvin the Martian’s Space Rockets. She rode a couple of them on her own (no adult allowed on a few).

We then went to eat at the All American Cafe. We got the chick strips and fries (with a soda). The chicken strips were pretty good. The fries were kinda bla. My wife liked the BBQ sauce. When I get surveys from Six Flags they are always asking about the condiments. I finally have an opinion to give them. 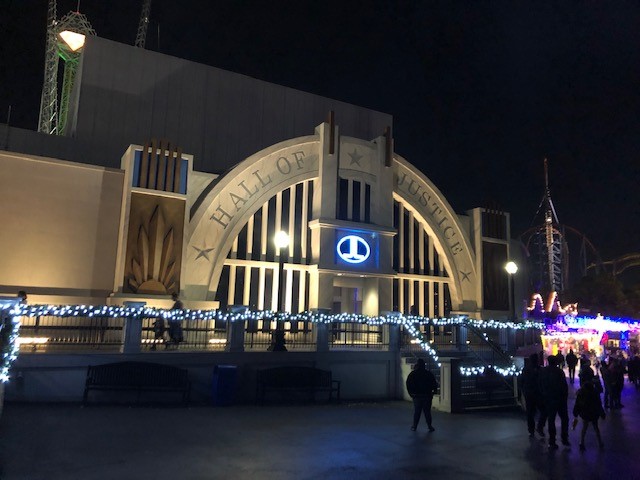 After that I wanted to try the Justice League Battle for Metropolis dark ride. My wife didn’t want to go so I went to the single rider line. Oh Six Flags… This ride leaves so much to be desired. Now, don’t get me wrong, if you never visited a Universal or Disney park, you’d think this ride is pretty awesome. When you compare it to rides like Transformers at Universal… there is no comparison. It’s like visiting the Haunted Mansion at the Disney then visiting a carnival Haunted House ride. It just feels cheap. The ride vehicle worked well, the lasers interacting with the screen was neat but the sets looked generic with no real detailing, the 3D was awful.

We then headed over to the Judge Roy Scream. I wanted to ride it again after so many years. We decided to check my 4 year old’s height just to see again. She was RIGHT at the 42″ mark. I swear she was an inch shorter on the other ride measuring sticks. My wife and I decided to take her on in and they could measure her. We all went and they didn’t. So she got to ride it. She is an adrenaline junky and she loved it. It’s been 10+ years since I rode that roller coaster last and MAN WAS IT ROUGH. It was Texas Giant before they re-did it ROUGH. Ouch!

We then hit the min-mine train and went to a store. I was looking at their zipper hoodies but the XX size was way too small. We got a Smores kit and a candy. With the Season Pass discount of 20% it was $5.71

Passing by a live band, a snow machine, and the light shows in Texas, we made our way to a fire pit next to El Diablo and cooked our Smore. We rode the old favorite the Conquistador then El Sombrero, then looked for a snack. We couldn’t agree on anything and wound up leaving with only a drink refill and no snack credit used. Poo.

This trip took three hours but we packed a lot of rides into it. The lines were nearly non-existent so that was awesome. I am not sure if we will go again before Christmas is over but we will try.

Here is my ‘this versus that’ comparison on spending so far:
(3 visits for 3 of us)

Sure, I would never pay full price for admission and we wouldn’t go as often if I had to pay full price, but it’s fun to see anyway.