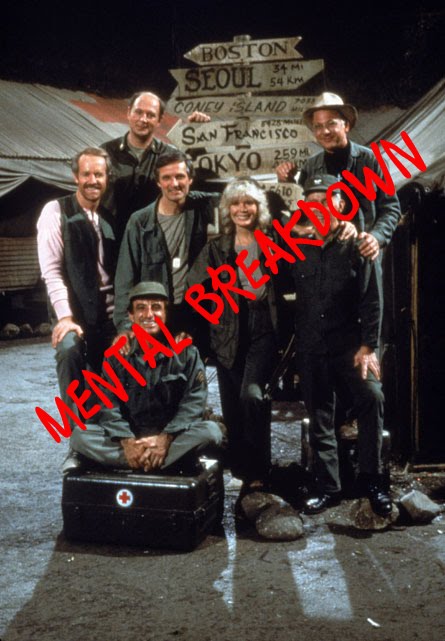 Ever been attached to a TV show? I think I just have. It was MASH. Sure, I’ve seen MASH like a krillion times during my life but something in my mind broke last month.

I started buying the DVDs in 2002 and pretty much got each one as they came out (by season). I watched them all and the DVD sets were stored on the shelf with all the other DVDs.

A few months back I started watching them again. You will notice I posted bits about it on my other blog Skipping Frog. Just pop over there and search MASH in the search bar at the top of the page.

Anyway I watched them all. There are 251 episodes. That’s a lot of TV, a lot of hours. That is 5+ days of watching!

My brain cracked. Towards the bitter end my brain showed signs of cracking but in the end it split open like a huge split thing. I thought more and more about the real war (or police action) in Korea. What would I have been like if I had been forced to go to war as a teen? Then I would think about how strange it must be when the war was over and knowing you were leaving 3 years of your life behind in that foreign land. Would it have been melancholy to leave that place and the people you grew so close to or would you just be happy the nightmare was all over? I think these are the things mental war-illness are made of.

My mind decided it had had enough when I decided to sell my DVD set. I needed some money to work on the old Volkswagen so I decided that I could see my MASH and Highlander DVD sets and make some cash. Oh man… the old gray matter didn’t like this at all. I started having dreams about MASH on an almost nightly basis. I started dreaming about episodes that never happened and the final episode I was there for while they were shooting it. The wrap-up party. Just anything you can think of, I was dreaming it.

My mind split like a… large thing that splits.

The DVDs are gone now. Off to be enjoyed by someone else. The dreams have stopped… for now. MASH might have been a slightly different case than most TV shows (because of its real-life basis, i.e. the war) but I can’t deny that it affected me. Maybe that’s why it held onto the ‘most-watched’ rating spot for so long. I decided to write this up because the Superbowl knocked MASH off it’s ‘most watched’ rating spot the other day. 27 years it held it’s title, not bad for a show from the 70’s, eh?