We call it ICBINY for short. The name is really a misnomer. It’s nothing like Yahtzee at all. Yes there are some dice, yes you roll them in an attempt to score some points but that’s about all.

It’s such a fun little game that I have decided to share the rules with you.

But first some history:

ICBINY was a shareware game. Where it was before that is any one’s guess. It’s actually kinda difficult to find nowadays. I did track down a working site that had the game but it’s a very primitive program. Several years ago Chris told me about this game he started playing called I Can’t Believe It’s Not Yahtzee. He remembered the rules and we played it in ‘real life’ (with real dice, not on the PC). We did have to refer to the program a couple of times to get some instructions but we figured it out and played it a bit (between our many games of NetRunner). 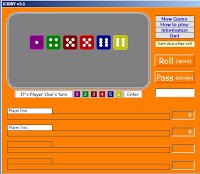 It’s been awhile since we played last and I suggested we play it one night but Chris was unsure about the rules. I decided to look them up but could only find that old game. I have installed and and will endeavor to transcribe the rules for you to play at home. Enjoy.

I Can’t Believe It’s Not Yahtzee

Object of the Game: Roll dice and be the first to reach 10,000 points.

That’s all! It’s basically a ‘push your luck’ type of game, do you keep rolling to increase your score or do you play it safe and collect small amounts of points and build up???

3 thoughts on “I Can’t Believe It’s Not Yahtzee”