Chris calls me an Equipment Queen. Apparently that’s a term that people in the music industry call someone who has all the equipment (weather they use it or not). I have a lot of video equipment so Chris thought the label worked nice for me.

Anyway, I had planned to make a camera dolly on the cheap. A camera dolly is basically a platform where you set the tripod on top and it had wheels on the bottom so you can move it around smoothly. The kind that people usually make are ones that will roll on top of a track (like they use in movies and such). Since no one can afford to have one that runs on railroad type tracks like the Hollywood ones, the DIY ones usually run ontop of PVC pipe.

You take some casters (in my case, 8 of them) and you attach them to the bottom of a piece of plywood that your tripod can sit on. The trick is to angle 2 of the casters inward so they can slide along a piece of PVC pipe. Think of an upside down ‘V’ shape… You place 2 casters on each corner of the plywood and you put down your PVC and simply roll the plywood along the PVC in a smooth motion. 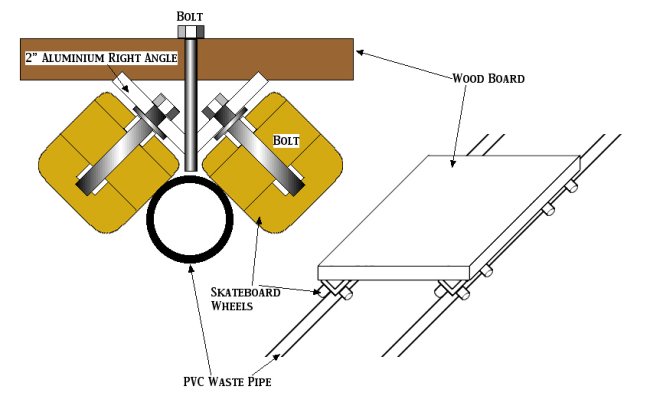 I know that the toughest part of this would be to cut some wood into that ‘V’ shape I was telling you about so for my first try I just did it on the cheap. I simply screwed the screws through the holes on the base of the casters so that I could ’tilt’ the casters and hold them in place (without any sort of extra wood). That worked for like ten seconds because when I got down on my knees I put the slightest pressure on the plywood and the casters flattened out. This method was just a little ‘too’ cheap.

Take a look at this page… it make me all goose pimply! So much to choose from! As you can see however the prices are really high. I must say that the dolly track that sits on top of tripods interests me greatly. I have a couple of smaller tripod that I might be able to do that with. I’ll save that project for later.